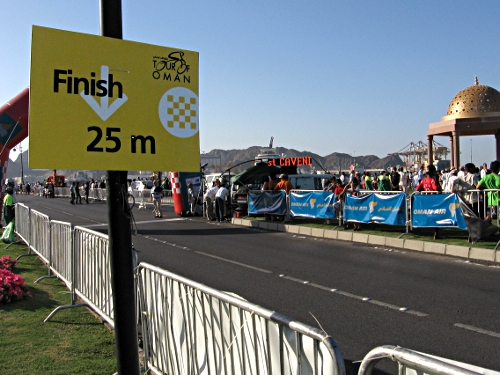 Yesterday afternoon I scrambled to the top of a rocky ridge above the corniche at Mutrah to sit in the sunshine and watch the final stage of the Tour of Oman.

A cycling stage race like the Tour de France, the event is organised in part by cycling legend Eddy Merckx. From my limited experience of the country these past few months I am not at all surprised that it’s been selected as a venue for such an event. It has a great network of smooth tarmac roads, some hideously steep mountain (or “jebel”) climbs and a consistently warm climate at this time of year.

I enjoy cycling a lot though I don’t know much about it so I was very pleased to watch Mark Cavendish win the final stage with a lightning fast spring finish a hundred yards beneath me. Pleased because he is British, pleased because it’s his first stage win of the season after two recent crashes in the Tour of Qatar and Tour Down Under, and pleased because he was the only competitor that I’d actually heard of (a reflection on my lack of knowledge rather than anything else). Congratulations to Robert Gesink from Holland on winning the race overall. 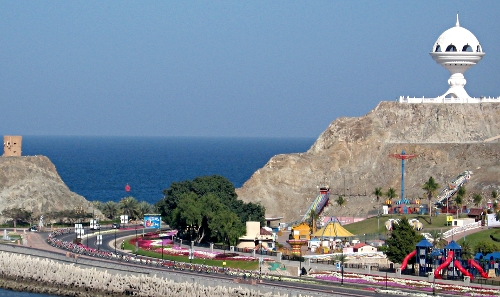 I’m not sure what the set up at these tours is usually like but I particularly enjoyed being able to walk amongst the cyclists as they cooled down after the finish and catch an elated Mark Cavendish as he pedalled past just yards away.

Best of luck to the Sultanate in its bid to host the 2015 Road Cycling Championships.