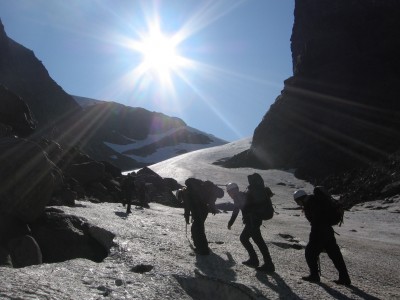 Of all the things we tried to impress onto them, keeping hold of your ice axe was probably number one. But now he’s left standing against a vast white backdrop, the solo violinist on centre stage without a bow.

I’m on the snout of a glacier attached to three teenagers by a rope eleven millimetres thick. Tied, in fact, with a combination of re-threaded figure eight, overhand on the bite and Alpine Butterfly knots. Ropework that I’ve helped teach these guys over the past few days.

It’s a youth development expedition organised by the British Schools Exploring Society with the objective of taking thirty-odd aspirant adventurers into the wilderness, teaching them to look after themselves and learning a thing or two about life while they’re there.

My primary concern right now, however, is what I’m going to do about the metal tool that’s sliding down the ice towards a large hole.

I look back down beneath me: down the glacier as it sweeps its dramatic way to the moraine; down over the loose jumble of rocks, a geological scrap heap of unwanted and discarded boulders; down at the flat, green, grassy sanctuary we call home, with its dark termite mounds of nylon and polyester in which we sleep, guarded by improbably positioned boulders the size of five-story buildings which give the place a feeling of closeness in an environment vastly overwhelming by any other measure; down further still, along the yellow brick road of glacial melt water, pressing down the valley with a sense of urgency that heightens the tension in stark contrast to the calming effect that the rest of the valley exudes; down the ice,across stones, through the blades, along the river, over the plateau and out to sea. Out to sea where the water broadens and with it the view and my thoughts.

And just as quickly they narrow again.

He’s down on his knees now, inching backwards towards the axe, now stationary, caught on a small ledge of snow. He’s a cat, caught unaware on the precipitous slope of a mirror, polished to a friction-free shine and without his claws for purchase.

“Stop!” I want to shout but the words are caught somewhere between my tongue and the back of my teeth. I want take control of the situation but I worry that wrenching his attention from this precarious act might tip the balance unfavourably. And besides, he’s so close.

Above me, the ants continue their march to the ever farther white horizon of the col. They haven’t seen the drama unfolding below and press onwards with heavily booted footsteps. The rope groups beneath me – Christmas tree decorations of bright red, yellow and green Goretex strewn haphazardly across a white bedsheet – stand in frozen unanimity, staring upward at the tiny figure sprawled out on the ice.

Tied to this guy, literally, he is my responsibility. If he takes a fall – which is what we all fear and the reason that time has slowed to the pace of the glacier and the reason the wind, which had previously been a roaring omnipresence, is now silent – it’s down to me to stop him. So I should be the one to act. To do something. But I can’t move.

Not because I’m scared. No, this isn’t a scary situation. It’s that perfect calm that people talk about in the moments ensuing a dramatic event. The reason that I can’t move is a far more practical one. Where I stand now, knees bent and body braced against the firm snow, the thin strand of rope that attaches me to the boy without an axe is taut. Should he slip, the only thing allowing him to build up speed down the slope is a slight elasticity in the rope. If I walk down towards him – grab his rucksack maybe and haul him to his feet, hand him my axe as I nonchalantly retrieve his or some such other act of gallantry – the rope will drop and with it my chances of halting his fall.

And so I stand there ready for anything but doing nothing as he down-climbs – a spider now, placing delicately his long limbs on the shiny surface of a leaf, finding purchase on the slightest of indentations – picks up his axe and waves it above his head as he tries to suppress a boyish grin.

My face maintaining its expressionless severity, I raise an arm above my head and point a thumb to the sky. On the line below me, three right arms extend in a reciprocal gesture. I turn back towards the slope, plant the shaft of my axe into the snow and continue our ascent with a firmly placed foot.

After two and a half years in the offices of the British Schools Exploring Society, I had one last hurrah as an assistant leader on an expedition to the Loppa Peninsula in Northern Norway. It was a month of camping wild, washing in glacial flow, drinking from the stream, bivouacing beneath a glacier and stomping over an ice cap. It was also a month spent with a fantastic group of people, young and old alike. After the trip I cycled to Stockholm.