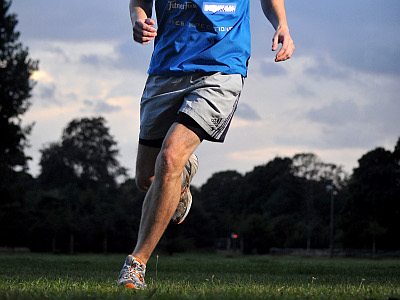 Bored after a day in the lab and itching for some exercise, I decided I’d go down the gym and try to run a 4-minute mile.

The walk over allowed me some time to do the maths.

All I had to do was crank the treadmill up to 24.75 kilometres-per-hour and see if I could keep it up for four minutes. I realised, however, that the treadmills didn’t go that fast and I took it to be a sign that this was not a well-considered idea.

That was a few years ago now but the idea lodged in my mind and I’ve now decided to start working towards running a fast mile. I’ll never do it in 4 minutes. I’ve only just started looking into it and can already tell that’s an incredible time. But that’s not what it’s about.

I’ve never really had to train hard for anything before. Learning to swim and get in shape for my triathlon last year took a lot of time and effort, but I only had to keep going. I didn’t have to go hard or fast. I’m not very good at that and I’m not sure I’ve got the motivation for it so this will be new ground for me.

To start with, I suspect I’ll be able to get away with adding a few training sessions to my usual activities and watching my time drop slowly. But I reckon there’ll be a point at which I’ll need to make a decision. Whether I want to press on with it and cut back on some of the other things I enjoy (like long distance running, chocolate chip cookies and a normal body weight) or whether I’m happy to let it settle as another thing I’ve just had a quick bash at.

This is an ongoing project. I had my first attempt in 2009, running to the end of my street and struggling to stand up at the end. It took just over six minutes. I’ve been running longer distances most of the time since then for my Tube challenge but my most recent timed effort, December 2010, was through a local oil compound. There was a slight downhill assist but it only took 5 minutes and 5 seconds.