In 2010, Laura Tomlinson and Tim Moss ran the length of every Tube Line in London.

They did so in support of the British Lung Foundation and by the time they finished on Thursday 9th September, they had run nearly 300 miles on 12 routes over 9 months and their final run was broadcast on BBC London News. 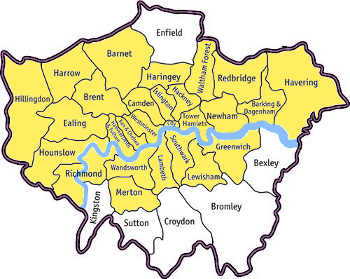 Let’s use the Victoria Line as our example. We “touched-in” with our Oyster cards at Brixton then turned around and ran back up the steps to the street. Then we ran to every Victoria Line Tube stop on our way overland to Walthamstow Central where we leant over the barriers and “touched-out” so we’ve got a record of the journey. That one was around 15 miles.

There are 12 Tube lines and we spread them out over the year, starting with the Circle Line in January and finishing with a group of runners in fancy dress on the Waterloo & City Line in September.

Has anyone else done this?

Prior to our run, Mark Moxon walked the length of all the Tube lines. His website – TubeWalker.com – is a great resource for anyone considering a walk/run along these lines.

Another chap walked the Underground routes in 2007-2008 and captured his trip in photographs.

Shortly after our run, Stephen Wright started a similar challenge. He broke the lines into smaller chunks than us but, where we just ran the longest branch of each line, he methodically ticked off every single station. His website no longer appears to be online but you can find him on Google.

In 2011, Steven Whyley ran between every Tube station in much the same style as Stephen Wright to raise money for Cancer Research.

Performance coach Rory Coleman has apparently registered the “Under-Round” as a trademark. It’s a challenge that involves covering 42 underground stations over 42km on foot. You have to pay him £10 to get the route.