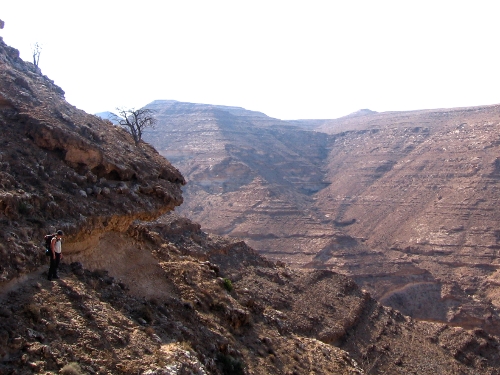 A masked man appears in my rear mirror.

He’s at the wheel of jeep with a large machine gun pointed in my general direction. The plume of dust in his wake comes directly from the Yemen border.

We’d joked about them. Teasing each other that we were in Al-Qaeda heartland. Certainly the dusty cave we ended up sleeping in last night felt like it was.

In reality, we were just on holiday in Oman, somewhere in the vague vicinity of the Yemen border. But it was difficult to tell where exactly we were without a map. So when yesterday’s hike took us past make-shift fortifications, a helipad scraped into the dust and a cluster of small rocks arranged to spell out the letters “R.I.P.”, the mood took a slightly sinister turn.

Which, in hindsight, makes it seem all the more daft that today we decided to drive towards the big green military tents and blockade. Soldiers rose to their feet and the tyres of two jeeps kicked up a cloud as they made their way towards us.

“Where have you come from? Show me your passports!”, ordered the solider before catching himself, “Sorry, how are you?”

“Good. Now, where have you come from? Show me your passports!”

This is Oman. Even when wielding weapons, they’re still terribly friendly.

Quickly realising that we were more tourist than terrorist – was it our dumb-founded grins or the snorkels on the back seat that gave it away? – the polite military man explained where we were. We were at the border of some kind of demilitarized zone which only happens to be manned today for Eid. Lucky for us or it might have been strays from the Yemeni badlands asking us questions and I suspect they may not have been as courteous.

He cordially requested that we turn around and head back the way we came which is when the masked gunman pulls up behind us.

Funny how your body sometimes reacts quicker than your mind. My heart rate’s doubled and my forehead’s already clammy but I don’t think I’ve quite worked out what’s going on. And before I can, the jeep’s alongside us, the horn is sounding and the man with the machine gun is giving us a wave.

Like I said, this is Oman. Even when wielding weapons, they’re still terribly friendly.