10 Tips For Your First Hitch-Hiking Expedition

THIS ARTICLE: Is written by Steve Dew-Jones, author of ‘The Rule of Thumb’, an account of a hitch-hiking journey from Salisbury to Malaysia with only two rules: Never pay for transport and never refuse an offer. Here is Steve’s advice for anyone planning their first hitch-hiking trip…

1. Be prepared for some waiting around

Unless you are supremely fortunate (or you are going only a very short distance), your experience is sure to involve a good deal of huffing and puffing on the side on the road, so be prepared for it and don’t let it get you down. There’s nothing more off-putting for a potential roadside redeemer than to see a scowl on your face.

You won’t get anywhere if you stand on the side of a motorway and stick your thumb out… apart from maybe a prison cell. In England especially, but equally apparent across Europe and the bulk of the Western world, it is imperative that you pick a good spot.
My advice is to stand somewhere:

If and when you are lucky enough to be picked up (and there aren’t many nicer feelings after a long wait), prepare to converse with your new friend(s) and hero(es) for as long as you are with them. Most of the time, they will have picked you up out of a mixture of benevolence and loneliness, seeking some company and a good chit-chat on the journey. Humour them.

A similar point to number 1, granted, but an important point nonetheless. This is as much for your own sake as that of your would-be driver because there’s simply nothing to be gained from stewing on the side of the road, although on occasion it is difficult to avoid. 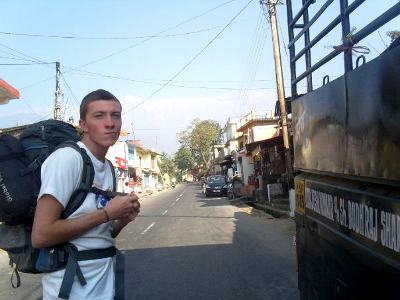 Like it or not, hitchhiking rarely proves the speediest form of transport. Generally speaking, I have found it isn’t much slower than public transport, but you’re still advised to leave early (9am or so) and to be prepared for the long haul. Depending on how far you are travelling, I would generally consider a successful hitch to be one that ends before the sun sets.

Although you won’t be walking for the bulk of your journey, there will be some walking involved and having as little baggage as possible will also be encouraging to whoever picks you up. They’re less likely to give you a ride if you take the kitchen sink, although some bloke did manage to hitch round Ireland with a fridge…

Hitchhiking is a lot of fun and, having hitched in over 30 countries, I haven’t experienced anything that has put me off it. However, it does involve an element of risk, so be careful.
Here are my top tips for staying safe: 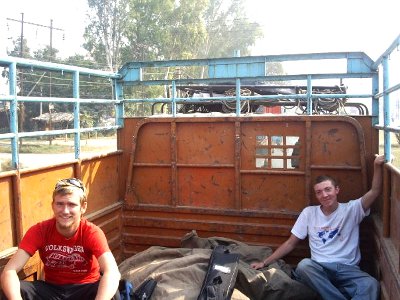 No matter what you may have heard, I have never faced serious danger while hitchhiking and the chances are that, providing you are sensible and friendly, no harm will come to you on the road. Don’t get into a car with anybody you don’t trust, don’t do it after lights out, don’t go in their outnumbered… Other than that, just relax and enjoy!

I’ve had a few iffy experiences on my travels but none of these (including being mugged and threatened by a nasty Kurdish man) actually came while hitchhiking. The worst hitching experiences I’ve had were:

As far as I’m concerned, there is no better way of getting around. Providing you have a bit of time on your hands, there is no reason why you shouldn’t hitchhike. It’s an adventure, you meet great people and you’ll always have some wonderful stories to tell and see things you would never have had the chance to see if you’d have gone on a train or in your own car. (This is especially apparent when in another country).

Leading on from my previous point, what better way to get to know a new country than by meeting some of its natives, and what better way to do it than by sticking out your thumb and being invited into a stranger’s life! The further from home you get, the more hospitable the people become, and the more people will invite you into their homes and give you food to eat and a place to sleep. Do it!