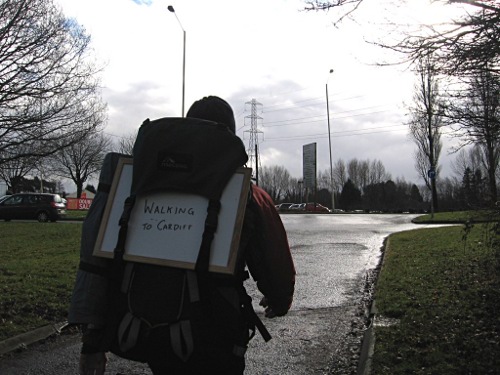 I knew I shouldn’t have gone to M&S. As wonderful as the instant hit of savoury food had been yesterday in contrast to  morning of biscuit bingeing, I had now discovered a food stuff that was worse for transporting in a rucksack than bananas: houmous.

‘Mushy Chickpea Rucksack Surprise’ aside, I was feeling good. I wasn’t in the least bit bothered about having slept in a muddy ditch directly beneath the A48 surrounded by the discarded beer cans and crisp packets less than a hundred yards from a supermarket’s recycling centre and arose with renewed enthusiasm for my trip. I packed up my bivvy kit and headed into the 24-hour store for some more biscuits, an anti-scurvy treat of some apples and the chance to clean my teeth in their fine facilities.

My first hitch had been a great one. Not only were the young couple really friendly and generous enough to drive out of their way to drop me at the Severn Bridge, but they also seemed genuinely pleased to have picked someone up. Left at the services on the English side, I dined al fresco on a picnic bench beneath a neon sign advertising burgers.

As the sun withdrew from the sky, its absence was quickly filled with cloud and rain. I dressed appropriately at set about walking over the Severn. At the middle of the bridge, no land for a mile in either direction, the weather was pretty wild and quickly revealed the term “waterproof trousers” to be a misnomer. Not feeling too keen on going to bed wet, I decided to splurge a pound on a cup of tea and, more importantly, radiator access. The only customer in the quiet Chepstow restaurant, I covered every heated surface in wet clothes – jacket, socks, shoes, hat, gloves – and eked my beverage out as long as seemed reasonable.

Peeking out the window into darkness I was pleased to see an absence of silvery slivers falling and strode back out into the open air with crisp clothes and a warm fuzzy feeling. I scrambled off the road and found myself the aforementioned location of beauty to bed down for the night.

Now, scraping houmous from the inside of a plastic bag with my remaining pitta bread, I planned my day. A friend was arriving in Cardiff at 5pm that afternoon and had offered to drive me up to the west coast. The offer of a bed and shower were already tantalising after just two nights out so I made it my mission to reach the capital with speed.

Clambering over barriers and dodging traffic at a large roundabout, I set up camp on the slip road the M4 heading west and assumed the position. It was about fifteen or twenty minutes before a large black car pulled over.

“It must have been cold out there. I’ll put the heated seats on”, said Barry.

Oh, if you insist!

“Dave”, Barry said into his hands-free, “Something’s come up. I’m going to be fifteen minutes late”. He gave me a wink and proceeded past the Newport exit to drop me off at the perfect spot.

“I did a lot of hitching in my day. Used to be a hippy. Went all around India so I know what it’s like”

And he clearly did. My set-down point, he explained, gave me three options:

“Look, there’s a layby for you to flag cars down in, the bus comes past every few minutes or, if you fancy it, you can just walk all the way along that road to Cardiff. It’s probably about 10 or 15 miles from here”

I thanked him, plugged in my ear phones and went with option three.