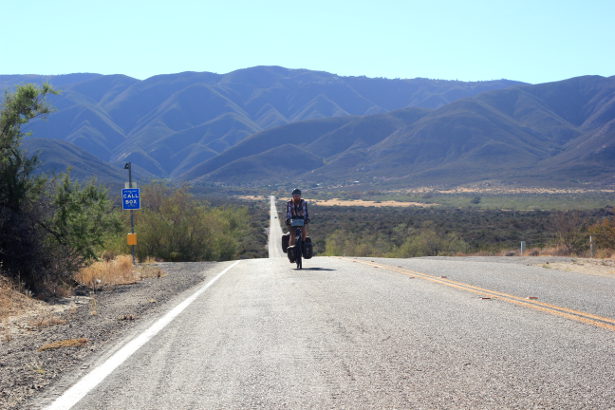 His huge form loomed over us in the doorway. Shaved head and powerful piercing eyes invisibly forcing us back into the darkened street. Well don’t just stand there, he said, come on in. The muscles of his forearm tensed as he dished out massive dollops of creamy mash potato. I’m a teacher, he told us over dinner. Work in the local school. We’ve got a gang problem. Lose a kid most years. You’ll be sleeping in my daugher’s room, she’ll take the couch. What? His daughter was 13 years old and sitting next to us at the table. We can’t do that! But we did. He insisted.

Jim insisted too. Wouldn’t take no for an answer. So we did that as well. BANG! Laura unleashed the first round of screaming steel into an inanimate bank of sand. BANG! BANG! That was me with Jim’s rifle, staring down the holographic sight. BANG! Jim’s favourite, a hefty black Italian shot gun. I make guns, he’d said, it’s a hobby. I’m a Federal Agent. We relaxed. He served up haddock with celeriac. See ya! he cried, and we pedalled off up the hill.

At the top, Jerry met us with a burger. Made them on his barbecue and boy were they good. He and Lainie spoke humbly: We’re not big travellers like you. But, in fact, they’d been all around the States from Alaska down to here, New Mexico, in an RV looking for the perfect place to settle. Looked like they’d found it. They still have the campervan parked outside their new house. We slept in it. A part of them wants to get back on the road I think. There’s a meteor shower tonight, he said, sipping a beer with us by an open fire in the back yard. I saw one! I cried. But in hindsight it may just have been an ember.

Sir my name is Hank and it is a pleasure to meet you. He stood tall, every bit the sheriff. You make yourselves right at home, ma’am. We used their shower and changed in their spare room. His wife was Californian but he was South West Texas, born and bred. The Mexican border was visible from their house. Some people said I’m racist, she said, but I’m not racist. I just think people should come here properly. We sponsored a whole family for their visa when no one else would help them. And the little Mexican ladies in town, they just adore him, she added, turning to her big burly husband, who sat silently on his chair. Cartel members knocked on their door and threatened her. Don’t let your husband back near the border again, they said. But he went back. Had to. He was the sheriff. And it didn’t stop her answering the door to us either.

This is a story from our time in the southern United States whilst cycling around the world.