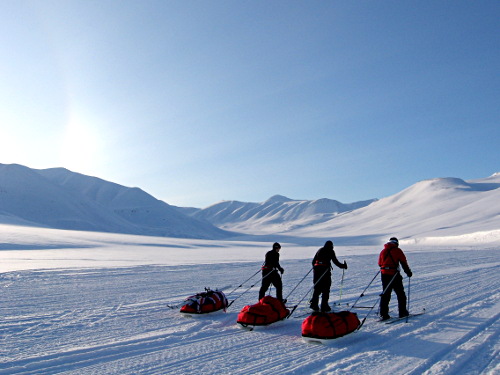 A good camping routine can be the highlight of any adventurer’s day (OK, it can be the highlight of my day) but there is nothing quite like the ritual of preparing a campsite in Svalbard. First you dig a platform of snow. This ensures a level ground for sleeping and gives you large piles of white paperweight with which to secure your tent – four-inch aluminium pegs not being a lot of use out here. Shovelling may be a bugbear for the manual labourer but for the office-bound pen-pusher like myself, it’s brilliant. It’s also a great way of keeping warm, a key issue once you stop moving. It’s minus twenty degrees here. Did I mention that?

Platform dug you then have to pitch your Arctic tent. This is like a normal tent except that you pitch it in the Arctic and take lots of photos to impress your mates. Bundling in through the front porch – the only possible way to enter a tent in this many layers – the next objective is to melt snow for cooking and drinking. My watch being permanently set to thermometer mode, I guess I didn’t pay much attention to time but it felt like the stove was typically on for about two hours solid each evening. First came hot drinks, then soup, then a main course, dessert, another hot drink, a thermos for the morning and a hot water bottle for the night.

With that great a volume in your belly there is little option but to lie back, shut your eyes and wait for sleep to come. You might think that night time would be cold but it wasn’t. This could be because the near twenty-four hour daylight removes the cooling effect of an absent sun. Or it could be because I had three sleeping bags. The big down one probably would have done the job on its own but by putting a cheap one-season bag over the top, it collects all the moisture and condensation that freezes on the outside, keeping the goose feathers dry and me warm. The fleece liner on the inside was just because I’m a chicken.

We’ve made it to the coast and a frozen vista of sea-ice and distant mountains. Skiddoo traffic dissipates to nothingness as we veer off the beaten track and along the jagged rocks that run down to the sea. Several days of skiing through white remoteness have left us with a hunger to get back to civilisation. Well, that seems to be what the others are getting at – I was rather enjoying myself – but they reckon we should keep going through the night so we can get a warm bed and some food that doesn’t come sealed in foil with a Best Before Date after the London Olympics.

Of course, there are worse places to ski through the night than Svalbard and there are worse days to do it than this one: “Happy Easter, boys!”, I mumble through my balaclava, backed up with ski-pole semaphore as the sun begins it’s loop again, half-obscured behind the mountainous horizon.

The reason for the urgency is the steep wall of snow we came across earlier in the day. Impassable with pulks strapped to our waists, we resorted to a game of Tug of War – four young men versus four pulks and gravity. We won but Newton had the last laugh as we rounded the corner and realised that, having got up our snowy staircase, we had reached a dead end and had to go back down. We were now faced with two options: drop down the perilous slopes to the coast and see if we could continue our way around, or back track the way we’d come over the last few days.

“If we don’t get down there we’re pushing that beacon”, offered Mike in reference to the emergency beacon I was carrying for, well, an emergency. This was a little drastic given that we had plenty of supplies for another few days and were well within schedule but I think it got the point across: Not everyone was as comfortable with this as I was.

We tried to get down to the coast but the slopes were dizzyingly steep to try walking down, let alone to drag a pulk and, disappointingly, we found a spot with mobile phone reception. Retracing our steps might have been a bit boring but it would still have beaten a few days in the office. However, the guys wanted out and phoning for a skiddoo to meet us a few kilometres away was a reasonable compromise from pushing the big red button and paying £20,000 for a helicopter.

We skied with fresh vigour along the route we had carved in the previous days until we saw the tiny blips of motorised salvation appear in the distance and thunder towards us. We had made many a joke about being rescued by hot young Scandinavia ladies and, to our mild surprise, we were not even the slightest bit off the mark. My memory is about as good as my Norwegian but I’m pretty sure the first words that came from the brunette’s mouth were:

“Are you boys looking for a ride?”