Back from South America 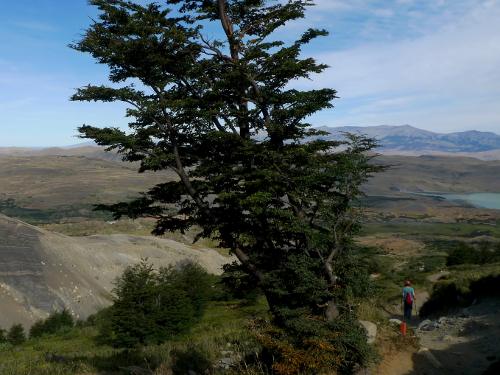 I’ve just got back from Patagonia. The normal blogging schedule will now resume.

In a nutshell down south, we spent close to a week making our way to the Pacific coast, followed by a week and a half of hard walking, then about the same amount of time doing some more relaxed exploration.

Getting to the start was a long series of planes, stop overs, buses and hitches.

We had a tough initiation to our walking itinerary, punctuated with a few shorter days then some more hard marching along a hot, dry, windy road.

At the end of that road, we awaited a re-supply. We had bought eight days’ food from the previous town, boxed it up, and put it on a bus to be delivered ahead of us to the last settlement before making a dash for the east coast.

The box hadn’t arrived when we got there. The village had no phone signal to find out what had happened. The only places with a cable connection were a restaurant and a police station. Neither place spoke English so we relied upon my extremely limited Spanish and ability to mime.

In short, no one knew what had happened but they thought our supplies should arrive that afternoon so we waited. The bus never showed but they said it would be there tomorrow. The next day we found out the box was somewhere else but would be arriving at 4pm so we waited. Our supplies had nearly run out by this point so, when 5pm rolled around and we were told it wasn’t coming today, we could no longer wait. We stuck out our thumbs and headed back to civilisation.

We were reunited with the box shortly afterwards and probably could still have made it back to where we left off and completed the crossing if we put our minds to it. But we had already shifted gear and Laura in particular wasn’t enjoying the endless slog through a barren wasteland so we used the rest of our time to explore some more beautiful areas.

We hiked through Torres del Paine National Park, still in the grips of a huge forest fire, spent a couple of days kayaking down Rio Serano and slowly recovered from two weeks of hardship.

Photos, some stories and perhaps even some video footage will be uploaded over the coming weeks.

Thanks go to Swoop Patagonia, Walk Patagonia and Rosker for help with our trip.