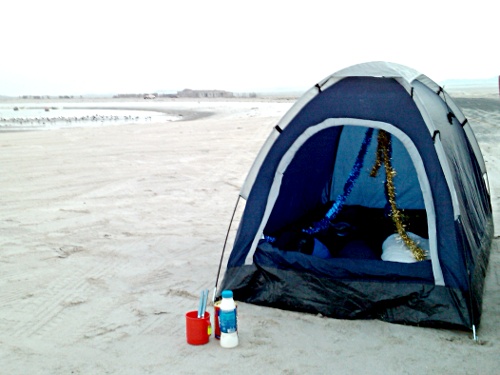 Masirah island sits in the Indian Ocean just off the east coast of Oman. It is around 50 miles long and 10 miles wide. It has a single town called Hilf on its north western coast and little else besides 90 miles of ring road; somewhere off which lies our tent.

Easy were it not for the fact that “re-tracing the road” would mean following a series of dusty trails up to the foot of a mountain and back in the dark.

“OK, so we’ll skip that bit and round down a little”

We drive for 45 minutes looking for our turning: a faint dirt track in a sea of dirt and tracks. It is utterly dark and our only aides are headlights (powerful but ankle height and mounted to a large hunk of metal) and the small torch I’d got for Christmas the day before. Where is the glorious moon that had illuminated our late night barbecue yesterday?

The car lurches to a stop and I hop out the passenger door to run along another dirt track, stumbling in the darkness towards the coast and yet another stretch of beach that looks nothing like ours. There’s got to be a better way.

We watched the sun rise and set from our campsite and I realised that it would be possible, with the aid of a compass, to gauge roughly when the road was heading in the right direction. Or, for that matter, whether we were on the right side of the island. Which we weren’t.

Back on the east side, we pull over by another set of tyre tracks. I run out. I run back.

“There’s a mountain in the way”

It was pitch black. I mean, really dark. We couldn’t even see vast mounds of rock just yards from the car let alone make out a dark blue tent hidden behind a sand dune 200 yards from the road. This was a needle in a haystack and we couldn’t find the haystack. Surely the moon will be up soon?

We used our ears to hear the difference in road surface – “I remember going over a rough patch just after we left”. We racked our memories for clues – “That shelter was definitely north of the tent”. We even resorted to driving on the wrong side of the road to get just a glimmer more light on the tracks but it didn’t stop us from driving up the same tracks several times over. Three hours came and went. We’d run out of water, again, and tiredness was creeping in.

We parked up and both walked through the sand in the beam of our headlights.

Neither of us dared jinx it with words but we both knew it to be true. Not until it was almost close enough to touch, however, did we allow the jubilation to take control. We were Shackleton hearing the steam whistle at Grytviken. We were Joe Simpson smelling the latrine that meant he’d reached base camp. We were two tired campers reunited with their tent.

And there it was, shameless in its betrayal, casting light across the island: The moon in all its glory, rising above the horizon and silhouetting our tent with prominence.