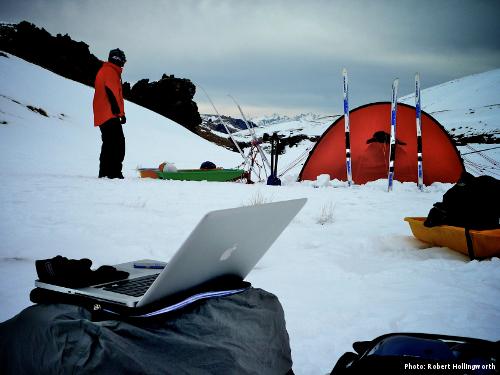 Although it is popular to deride expeditions for excessive use of social media, I actually find it a great shame when expeditions don’t provide any means of following their progress.

It annoys me as much as the next person, if not more, to see website after flashy website declaring that this will be the greatest ever expedition, updating Twitter and Facebook every 30-seconds, for a trip that might never happen. And I am also a firm believer in the value of focusing on the immediacy of an experience rather than photographing or, indeed, Tweeting every little occurrence.

But that does not mean that we should dispatch the baby with the glacial bath water. It is quite possible to keep the world informed about your experiences without overly detracting from them. Moreover, I would argue that it is often better to do so.

Most people who go on expeditions tend to claim that at least one of their aims is to inspire/motivate/raise awareness/raise money. These purposes, surely, will only be served well by some effort to include followers back home. And even if you don’t go in for any of that, then why not just do it because it’s fun for the rest of us? Let us live a vicarious adventure.

Of course, much of the story can and should be told once you have returned. I don’t dispute that and would not advocate spending hours editing video footage in your tent when you could be outside enjoying the sunset. But let’s not pretend that a story told in retrospect has the same impact as one followed live.

I agree with a lot of the rhetoric. There is often too much blogging and not enough climbing. But I think that it would be a great shame if the conclusion drawn from such discussions was that updates from the field are a detriment to and distraction from proper expeditioning. Get off your high horse and share your story.