Home Tim's Adventures On being a female traveller

On being a female traveller 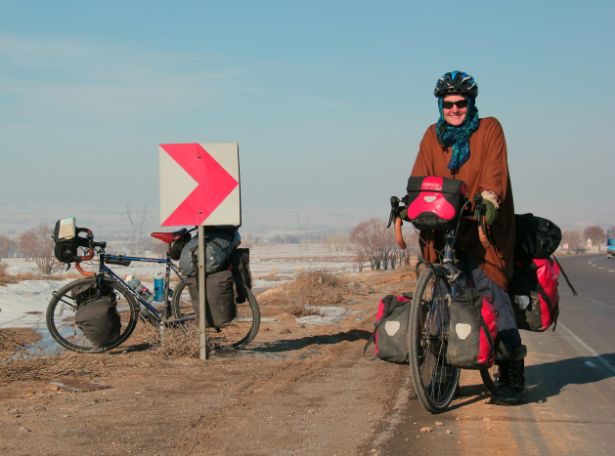 We live in the twenty first century, and yet chauvinism, misogyny and paternalistic attitudes towards women are still alive and kicking. Travelling throws these into sharp relief, as it means stepping outside the bubble we create for ourselves with the familiar attitudes of friends and family, and encountering new people and sometimes challenging opinions.

The following examples are just a few instances from the last few months where I have been made hyper-conscious of my gender. It may be a rant, but so be it.

1) With almost every man we meet, conversation is directed at Tim, and it is he who is quizzed about our trip, asked where we are going and given the honour of eye contact. Even Tim’s best efforts to bring me into the conversation don’t always work, and so I play the irritating wife trying to get a word in, or else give up and stand as the silent partner.

(I should point out that my previous experiences of travelling alone have been different. Something just seems to change when I’m stood next to a bloke).

2) The morning we were due to leave a small town, our host announced that he would ride my bike with Tim and I would go in the car until we reached the outskirts, presumably so I didn’t have to face the dangers of the urban roads. This was well-meant, but sort of overlooked the fact that I had cycled 4,500 miles to get there, including through the heart of the second biggest city in the world, so I would probably be fine in a town roughly the same size as Bolton.

3) One man I had just met asked me how I was so fat, having cycled all the way from England. Another bloke joined in and before I could say ‘I ate all the pies’, they were discussing possible reasons for my heft, along with suggestions as to how I might lose weight.

This was no cultural quirk – the initiator of the conversation had lived in the USA for several years so should have been aware of the impact his words would have. Nor am I particularly overweight: I am a UK size 12/14 and relatively fit. Both Tim and I felt very strongly that this conversation would not have happened had I been a man.

4) I am a member of a cycle touring group on Facebook, where a man recently posted a photograph of his girlfriend changing a bike inner tube.

‘Look at my girl changing her first tyre. Isn’t she doing great? Wow it really turns me on‘.

A series of comments followed this most patronising of captions, all from men congratulating its author on finding a ‘girl’ who he could teach to change her own tyres. Several remarked how hot it was and how special she must be, compared to their own useless girlfriends who were so dependent on them.

I question who these women are who would stand to be treated with such condescension. It’s not that I care whether a particular women can change a tyre or not, but the fact that this man was being hailed a hero for training his woman to do it herself. What’s next, he’ll teach her to roll over?

5) We were told by one friend, a business manager, that women are just not able to do physical jobs or jobs that require them to be in the field. Instead, they are best suited to office work where they can use their administrative skills behind a desk. I listed several of the fabulous ladies I know who do engineering or surveying work, spending most of their days wearing hard hats and hi vis, but this man was not to be convinced.

I accept that men and women in general may have different strengths, but this was a conclusive ruling on what women are and are not capable of. He was pretty sceptical of my abilities as a lawyer and didn’t believe that women had the necessary attributes to be managers or business leaders.

Pity the poor women who work for this man.

(I am deliberately not mentioning what country this way as I suspect that this attitude may well be prevalent in many parts of the world, including the UK).

6) The veil is a perennially contentious subject, but my attitude is simple: choice.

Iran tells women they must cover up; France tells women they can’t cover up. Both are problematic. Women’s dress should not be a matter of law. Telling women what they can and cannot wear is an insult to female intelligence and a potential breach of human rights.

If women want to wear a headscarf, want to dress modestly or want to don the chador or abeya (the long black robes common in Iran and the Middle East), that’s their prerogative. As long as it really is their choice and not the imposed wishes of fathers, brothers, cousins or husbands, go ahead.

I’m sure there will be plenty more examples before this trip is finished but at least these are now off my chest. Do you have any other examples to add? You can include them as a comment below, or submit them to the Everyday Sexism Project.