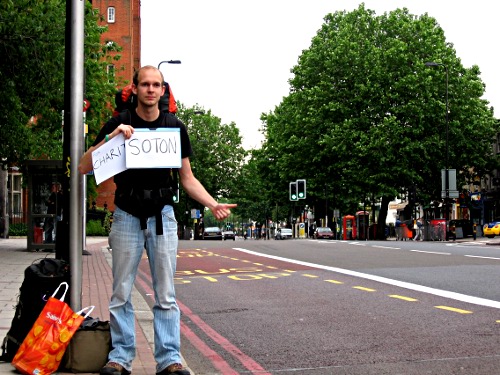 I have to admit to being more than a little reluctant to depart. All my friends and family had gathered to see me off, I was at home, and everything was safe. But the reason they had all come to this place was to see me start my journey–my epic expedition to travel the world.

I bit the bullet. I put my top hat on and pedalled–pedalled because I was in a human-powered hovercraft, my first of 80 different methods of transport I will hopefully use to take me round the globe.

As planned, though not perhaps expected, the machine slowly began to elevate off the ground, and my navigators were soon pulling me toward the gates–the gates that weren’t actually open yet and only just swung out in time for me to squeeze through. This was soon to be the least of my worries, as high-speed cars whizzed past on the three-lane road we had chosen for our excursion. My fear was quickly replaced with bemusement and bewilderment. I was on Gower Street in London, in the middle of three lanes of traffic, pedalling a ridiculously coloured human-powered hovercraft, surrounded by a crowd of people with cameras, and all the while I was wearing a big top hat and an even bigger grin.

By the time we pulled over, I was quite out of breath, so Thom (my companion for the journey) took the role of spokesman and thanked everyone for attending. However, the crowd was distracted by something else–an old lady in a mobility scooter. Five minutes later, Thom was pulling off a three-point turn on the scooter and getting a £5 donation out of her!

Left standing on Gower Street with a crowd of people and no plan, we decided to just leave. We’d said our goodbyes earlier, so we headed quickly to the nearest bus stop, with my family accompanying us. Our next destination was Hamleys toy store, where we’d arranged to use some of their toys as novelty transport methods. Our video camera’s batteries dying before we’d even got down the road served as a short, sharp reminder of our lack of preparation, but we charged it behind the counter and managed to film a few short stints on pogo sticks and toy cars.

The idea was that we would leave Gower Street, go to Hamleys, and then travel the world. The reality was not so grand. In fact, we went back to my flat to finish packing. My parents bought us lunch, and then I went to photocopy passports and pick up our currencies (except that it was Saturday, and Going Places was closed). Apart from almost forgetting our passports in the photcopying machine, we were ready to go. This time, we were leaving for good.

Our actual departure began with the slightly less grand London Underground. We sat on the platform at Warren Street and were approached by a guy who asked, “Hey, you’re not those guys who are going around the world in 80 ways, are you?”

We confirmed that we were and had literally just begun our trip.

If only he knew what we’d been through the last couple of days, I’m sure he would have understood the lethargy.

Sitting on the Tube, my friend happened to walk past and shout “Good luck!” to us, which gave me the perfect opportunity to plug our TV appearance to the whole carriage: “We’re on television at half-past five this evening–ITV!”.

We had decided somewhat arbitrarily to try to hitch a ride to Southampton from Oval, based solely on the fact that my mum had driven home from there along the A3 the other day. And so we sat by the side of the road in matching ’80 Ways?’ T-shirts, me in a top hat, with two signs, one saying “Southampton” and the other saying “For Charity”. Actually, the first sign said “Soton”, which Thom assured me was the road-sign abbreviation for Southampton, but we soon changed it after several funny looks.

It was thoroughly entertaining waving my sign in the faces of passersby and staring at them until they at least acknowledged my presence. But after an hour or so of fruitless thumbing, we decided we were in the wrong place and got the bus. Technically, of course, we had already used a bus, when we are only supposed to use each method of transport once, but we didn’t think it a big infringement upon the spirit of the trip.

After rather longer than anticipated and rather more buses than desired, we arrived at Richmond, a town not far from my parents’ house. Despite not yet leaving London on my global journey, I felt the need to ring my dad for directions, and he directed us along the A316.

It was getting dark, and it was starting to rain; we were tired, we were hungry, and we did not want to be walking along an A-road carrying heavy rucksacks. Thankfully, the buzz of excitement from the day’s activities was still flowing through me and keeping me going, but I knew it would not last for long. We must have hiked a mile or two before reaching a suitable point for flagging down a ride. We donned our novelty paraphernalia and stuck our thumbs out. Minutes later, a Mercedes pulled up on the other side of the road, and the driver shouted out, “Southampton?”

I ran excitedly towards Thom. “We got one, we got one!” The buzz was back.

An hour or so later, and we stood by the docks at Southampton, shaking each other’s hands. “We did it, mate.”

With the adrenalin still pumping, I suggested to Thom that we try to get across to the Isle of Wight on the boat (our goal for the evening) for free. Once again, we kitted up and Thom got out the camera. We marched in on the ticket office and talked our talk:

“Hi. I wonder if you might could help me. My colleague and I are travelling around the world for charity, and we need to use 80 different methods of transport. We would like to use your catamaran. Is there any chance you could help us out?”

Not only did we get free tickets, but moments later, the kindly cashier emerged from her office to ask whether we would like any hot drinks!

I couldn’t believe that we had done it. We had floated a hovercraft down the road and left London, been on TV and been spotted on the street, and gotten to the Isle of Wight–and we’d done it without spending more than the cost of a Zone 2 travel card.