Home Tim's Adventures The Sight of Solitude – Part I

The Sight of Solitude – Part I 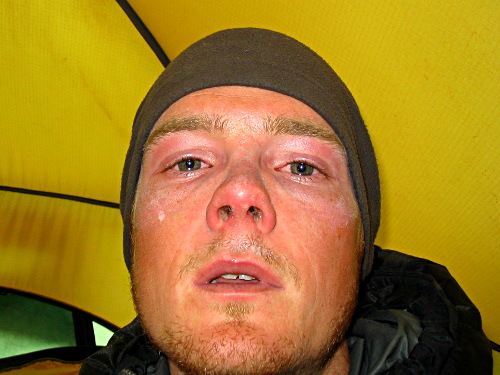 I awake with a searing pain in my eyes. Without a background in chemistry or any medical knowledge whatsoever, I imagine that this is what it’s like to bathe ones eyeballs in a dilute solution of something rather acidic.

A few weeks of being outdoors in the elements had left my skin a little worse for wear and last night, in a moment of Ran Fiennes meets Estee Lauder, I moisturised my skin with the only thing available: Factor 50 sun cream. Perhaps it had got into my eyes.

To be honest, I didn’t really care what caused it. They were still burning and opening them was a bit like taking your hand out of the freezer to stick it in the oven – different but still not altogether pleasant.

The morning before we’d got up in the cold darkness of a Bolivian winter to enjoy another oat and Brazil Nut surprise on the stoves before trudging up the valley across the rocks. It was the team’s third big day of climbing having knocked off two or three first British ascents between us in the past few weeks. First ascents, that is, by virtue of our quiet location within the Quimsa-Cruz rather than our expert climbing abiliities (or, at least, mine). The Quimsa-Cruz is one of four “cordillera” mountain ranges in Bolivia. Located some 80km south east of La Paz, the Bolivian capital, it was still a good five hours drive to get to. It’s the smallest of the four ranges and, with no peaks over 6,000-metres, it’s also the least visited. So, our victories beneath a British flag were easily won since no other UK expeditions had ventured into the area.

But still, it was pretty cool.

Extracting my upper torso from the sleeping bag, I held my finger tips trembling anxiously an inch from my eyes. Touching them was out of the question but ignoring the pain also didn’t seem quite right and thus I settled for hovering my digits uselessly in front of my face. I fumbled for my Nalgene bottle and tried various permutations on the theme of washing out the “acid”. I’m not sure it helped much but now my top was a bit soggy.

Day light had expanded slowly into the crisp air that previous morning, imperceptibly warming the core and rendering our torches impotent without our realising. Crampons were fitted and knots were tied without a word being spoken. Two pairs moved together across the ice on a connection of nylon strands, the teeth on our feet biting into the iced cake beneath us with each rhythmic step. My mind shifted easily to the memory of that peak on the other side of the glacier that we had straddled earlier in the trip.

Despite having worked in and on expeditions for some time now, and having been based inside the Royal Geographical Society for two years, I’m still not entirely sure if there’s any kind of official list of “who climbed what and when”. To the best of my knowledge, each of those peaks we climbed were the first time they had seen British feet. I’m not a big one for first/fastest/longest/toughest in my expeditions. In part because I’m not that good at anything but also because it’s just not what it’s about for me.

I enjoy adventures for the thrill of trying to something new, the buzz of finding out what something you don’t know anything about is really like, testing your mind as well as your body. For me, at least, that does not require doing anything extreme or ground breaking. And, presented recently with the opportunity to break a World Record, I’m still not sure it’s what I want to do.

That said, I got a real kick out of standing on a summit that had barely been visited before. I’m staring now at a photograph of one such summit that sits framed on my desk. A hypnotherapist friend once asked me to go the most calming, tranquil place place in my head and that’s what I came up with – that photo, that summit. I definitely got a kick from the remoteness. And I got an even bigger kick when my teammate, JC, returned from climbing a small peak deliberately on his own so as to claim all the glory of what he thought would be a first ascent only to discover a large shovel buried on the summit.

(This article was originally written for Wide World Mag)