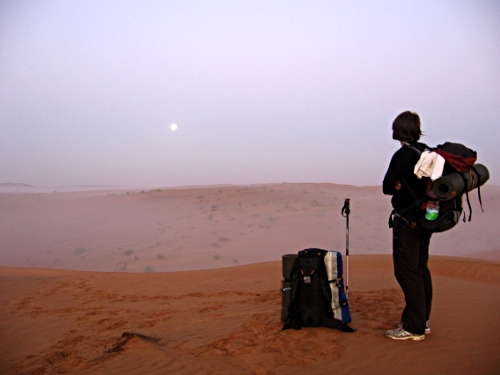 It is a rare treat to watch both the moon set and the sun rise in a single sitting but that is how we started our second day. Twelve hours later we would catch each celestial body in the reverse role but there were many more dunes to cross before we reached that point.

So tired was John the night before that no sooner had he declared it was time to stop for the night than he was asleep in the tent, fully clothed. As such, we weren’t as surprised as we might have been, though not any less disappointed, when he said he would leave us that morning. Laura and I split his tent between us, glugged down some of his spare water and bade him farewell as he walked northwards out of the valley to hitch his way back to Muscat.

We had covered a slightly disappointing 20km the first day. We knew that was an underestimate based on a straight line and that walking through sand was never going to be easy but we also knew that excuses wouldn’t get us any further east. We got our heads down before the sun was too high and marched across another ten dunes before lunch, as many as we had done the entire previous day. 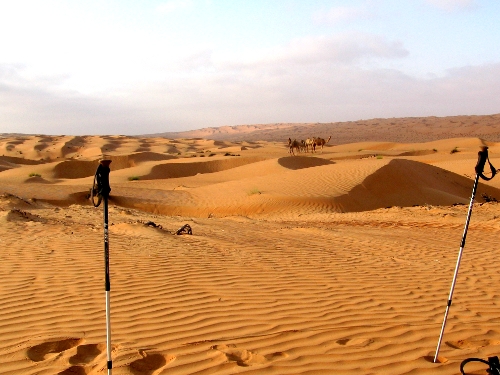 Within seconds of collapsing at our designated lunch spot – a lonely tree perched in the sand halfway up a dune – the wind picked up. With wind in the desert comes sand. We battled to weigh down the guy lines of our tarpaulin by filling plastic bags with sand but it was never going to give us the shelter we needed. Sand was flying everywhere.

We ate a miserable lunch of dry bread with cheap cheese; grains of sand crunching in our teeth with each bite. Grit filled our eyes, our ears, our nostrils. I covered my face with a scarf and somehow managed to fall asleep sleep though awoke shortly afterwards beneath a freshly created dune. It was not restful to stay in the flying sand but it was too hot to keep moving so we had to settle for frustrated clock watching while the sun slowly lowered. 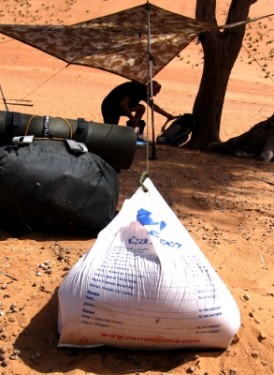 Sun goes down. Moon comes up.

After another six hours’ marching, we were well into the eastern half of the Sands. Where previous valleys had seen frequent 4x4s passing by, that afternoon we did not see a soul. More greenery appeared and the dunes became less like orderly rows and more like an endless choppy sea. Camels roamed freely and herds of goats grazed on what plant life they could find. Lizard and dung beetle tracks abounded, and even the tell-tale wiggle marks of snakes were spotted between tufts of grass.

Fatigue began to set in. As we crested each dune under the tranquil light of the moon we would silently hope that it was the last but every time our optimism was thrown back into our faces with the sight of yet more dunes silhouetted in the distance. Tired and feeling the thirst more than ever, we pressed on without speaking, willing our legs up those short, sharp sections of sliding sand that required otherwise tired muscles to work at double speed to make any progress. But as 10pm arrived and the eastern plateau failed to materialise, we made camp for another night.