Where Yes Means No: Albania

Croatia left us with a final flourish in the form of Marko.

Dubrovnik had unleashed a series of hills on our weary legs that day and as the sun lowered, the road rose away from us, never ending in its winding ascent.

We knew it was close but I’m not sure what first gave it away as Marko’s residence. The child’s tricycle dangling from a tree? The assortment of generators, bath tubs, huge air conditioning fans and other paraphernalia that littered the lawn and seemed to fit so perfectly the eccentric profile we had read online? Or perhaps it was just the large red sign on the side of a converted caravan that declared with the boldness of the Hollywood sign (if not the panache): “Marko’s Fleamarket”.

He had been on this planet for 78 years and had enough stories to account for each and every one: escaping Tito by boat to Italy, campaigning for the Canadian Liberal Party, drinking with Fidel Castro, introducing democracy to Montenegro… his fanciful tales entertained us all evening and for the following days as we rolled on to the next country.

No doubt Montengro has much to offer the tourist, perhaps even the cycle tourist, but for us it was mostly grim highways and grim weather. Reprieve came first in the form of the 1992 Serbian Road Cycling Champion (“Vlad” to Laura and I) who wandered up to our camp one night and offered to service our bikes. We spent the next evening knocking on doors in the hope of finding shelter from the storm and eventually found ourselves the sole occupants of a long deserted motel, complete with broken windows, cobwebs, rusty taps and a slightly crazed caretaker with a little too much of Jack Nicholson’s “The Shining” character about him for comfort.

And so it was with unexpected pleasure that we were greeted by Albania.

Greeted, that is, by a large bull walking nonchalantly down the road. Proceeded not long after by chickens, donkeys, pigs, horses and more.

Whilst it seemed in Montenegro that no one was having a good time (or perhaps read: we were not having a good time), the Albanians smiled and waved without exception. The children shouted Hello! and drivers honked their horns. 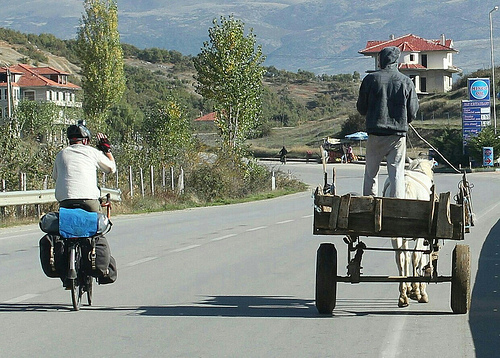 At a hostel in Shkodra where a cat’s claws wreaked havoc on our tent, a gentleman translated a basic message into Albanian for us. It read something like this:

We called it the Magic Letter (a term possibly borrowed from Alastair Humphreys who used something similar whilst cycling around the world) and with good reason. It really seemed to work magic.

We pulled up to the cafe, smiled at the owner and pointed to the appropriate sentences.

Minutes later we were sipping a sweet lemon tea with a freshly filled water bladder and a tent pitched 10 yards away out the front of the cafe. No matter that some hours later, in the middle of the night, said tent appeared to be pitched on a concrete flood plain and under sustained assault from Mother Nature’s most ferocious of downpours. During a brief lull between said attacks we scuttled first under the shelter of the cafe’s tarpaulin and then, when the kind owner came out from his overnight watch, inside the cafe itself to bed down on its (dry) floor.

The following day our love for Albania was tested briefly by the urban sprawl, pollution and traffic of its capital – Tirana – but we soon passed through its smog and road works to find ourselves struggling up another endless mountainside being pummeled by water from the heavens once more.

I overtook Laura, made a swiping “Kill it” gesture at my neck which was immediately understood as this:

The man later to be known to us as “The Uncle” was, at this point, just a man. He stood in the doorway of his workshop looking down on two drowned rats with bikes who pulled into his driveway and who approached him with wild eyes and a piece of paper in their hands.

I presented said paper to the man.

“We have cycled to Albania from the UK…”

We pointed to a possible camping spot: a patch of dirt beneath a roof of concrete that had the single key feature we required in a camp site for the evening (it was dry). He shook his head. The magic was not working.

Still, he seemed happy to let us sit out the storm and moments later his wife appeared with a bottle of water (the magic worked a little) and two pomegranates.

“Do you know anywhere we could camp?’, we articulated through hand movements.

We eat the pomegranates in awkward silence and contemplate the reality of heading back out into the maelstrom. The wife disappears and returns with a girl.

Once The Girl had explained that The Uncle was happy for us to camp outside his workshop and had been trying to express as much through the Albanian tradition of shaking his head to mean Yes, she went on to say that, actually, they’d really rather we stayed in their house.

Of course, it’s not every day that two Brits turn up on bicycles so The Aunt got onto the old dog and bone in a hurry and to tell the relatives about their new arrivals. And so, whilst Laura showers, I am faced with a steady stream of family members who have come to see the English people. One of the cousins even missed his son’s first birthday to meet/see us.

The Girl Who Speaks English makes the situation much easier – she speaks English, after all – but when she leaves the room, awkwardness inevitably descends. The Uncle reaches for a wedding video to fill one such void and Laura, back from the shower, struggles to control her giggles at the 1980s special effects.

An hour ago we were wet and cold. Now we are warmed both by showers and by the kindness of strangers. We are also fed like kings before bed. In the morning, we pack up swiftly to avoid abusing the hospitality. The poor Girl is dragged back to the house to interpret and misses the start of the school. I feel bad for her having the burden of translation upon her once again but ask her to translate one last message:

“Please tell your mother”, (who missed out on last night’s entertainment but has made it to see us this morning), “that she has a very kind, intelligent and thoughtful daughter”.

She blushes but proceeds to translate when prompted then replies:

“And can I say something to you? You are absolutely the best people I have ever met!”.

Mounted on our bikes, we wheel them to the gate.

“I hope you have enjoyed your stay”, says the girl.

I shake my head.