10 things I learned at the Explore Conference last weekend 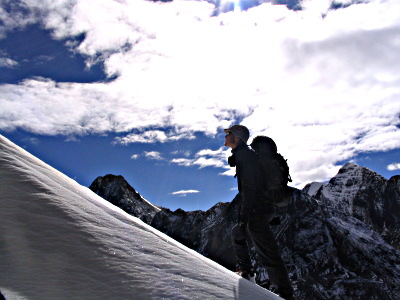 I spent last weekend at my favourite event of the year – the RGS Explore Conference – at which I was very lucky to be a speaker and a panellist. I was also privileged to both ask and be asked for advice on a number of occasions.

I find the event quite hard work because, although I love talking to people and giving/getting help, it doesn’t come naturally to me and it takes a lot of energy. That, coupled with all of the inspirational stories and excitement, made for a concentrated learning experience of a weekend (and I’m not the only one).

Here’s what I’ve got:

#1 – Just because you’ve got a microphone, doesn’t mean you’re right

The lights, the sound system, the crowd, the venue. They all create an atmosphere that easily sucks you in and I quickly found myself nodding along to things the speakers were saying with which I didn’t really agree. Two points stand out:

The first was the assertion that people shouldn’t go on an expedition without having a purpose. And, to qualify that statement, “first this and that” and “fun”, clearly didn’t qualify.

I believe that expeditions have the potential to deliver strong messages and elicit significant change, and would often encourage them to do so. But I also respect those that go for the hell of it and would far rather go on one of them than concoct a dilute excuse for a scientific/charitable/noble purpose.

The second thing I disagreed with was Glen Morris’ position on flying. Specifically, that he doesn’t do it because he thinks it’s bad for the environment. Well, I won’t argue with the basic premise, but I wouldn’t follow it to the same conclusion. I think travel is too important a tool for understanding our world to be restricted by a veto on flights. (Having said that, Mr Morris, I thought your talk was great and would never have guessed your age).

N.B. I hope you’re not agreeing with me just because I’ve got a blog.

#2 – To ask for help is to be vulnerable

Following one of the many great talks on the weekend, I approached the speaker to ask for some pointers on something he had spoken about. Perhaps I caught him at a bad time or simply asked the wrong question, but I was not prepared to be treated with the disdain and condescension with which I was received.

What surprised me even more, however, was my own reaction. As soon as I had escaped his grasp, I fled the room and hid, quite literally, in a corner while I calmed down. I didn’t know this guy from Adam and had asked a very mundane question yet I felt like a tiny bug crushed beneath a giant foot.

Because, I think, it takes a lot of guts to ask someone for help. You’re putting yourself out there, exposing yourself and it leaves you vulnerable in someone else’s hands.

I only hope that, of the many strangers bold enough to approach me this weekend, I did not make any of them feel an ounce of what I did on Sunday morning.

#3 – You can get a real kick out of helping people

The highlight of my weekend came at Saturday lunch time and, for once, the food was not to thank. In fact, I was desperately hungry and trying my damnedest to get to the feeding station but I just couldn’t get there.

People kept talking to me.

It was brilliant. I’d just had my ten minutes of fame and complete strangers were introducing themselves, telling me their grand plans and asking for advice on a vast range of topics. I have no idea if my ramblings were of benefit to anyone in the building but they all smiled, shook my hand and said ‘thank you’ and that was more than enough to make my day. No, my weekend.

A group from the University of Aberdeen are heading to Nepal; another bunch of guys are organising a caving expedition to Montenegro; a girl with a nose-piercing is climbing Kilimanjaro for her local hospice; a well-spoken videographer is looking for expeditions to join; someone far more experienced at rickshawing than me had also thought about a long distance trip in one; a medical student from UCL wants to put together a research expedition to one of the poles; a chap with rough-edged business cards is taking DoE groups to China; and a petite blond girl is trying to think up expedition ideas that her local paper would like.

#5 – An expedition can still capture a nation’s imagination

Last year a documentary was aired on the BBC called The Man Who Cycled The World. The star, Mark Beaumont, had filmed his successful attempt to break the speed record for cycling around the globe. His time has already been beaten by another Brit, James Bowthorpe whose record, in turn, is already under threat by Julian Sayarer. And, I was told (by a guy with an apple for a head) that there are several other Britons in hot pursuit.

Whether or not you think such a record is a worthwhile pursuit, I think it’s fantastic that an expedition can inspire so many “normal people” to up-sticks and have a crack at doing something great.

The chicken on Saturday was good, but Sunday’s salmon was great.

#7 – If you ask a question, have the decency to listen to the reply

Watching some fantastic footage and stories from Anthony Geffren unfold on screen, I found my lip curling involuntarily. The videos were fantastic but, for me, the dramatised slogans and voice overs were not – “The most daring expedition ever!”, “The most hostile environment on the planet!”.

So, when the time came, I stuck my hand up and asked him if he ever felt a conflict between the realistic portrayal of the expeditions or scientific research he filmed, and the need to produce a compelling product.

My question at least impressed my mate who was sat next to me. “Good question” he offered with a nod of approval. Buoyed with machismo, I licked my finger and drew a vertical line in the air – “Tssst!”.

As I turned back to the stage, nodding smugly, I realised that Anthony, understandably, was looking directly at me, giving me his answer and I hadn’t even bothered to listen. More’s the pity since, from what I did hear, he gave a very good response.

It was on my bike ride home that I reflected on my weekend and composed the list you’re reading. I was tempted to pull over at the side of the road, whip my laptop out and start typing.

But, apart from being cold and dark, I realised that I should probably stay on because it’s often my bike rides that give me inspiration. It was on the saddle that this piece came to me and it was rolling on two wheels that I thought up this one. In fact, I have come to cherish even the most mundane of commutes and the most miserable of cycling conditions simply for the opportunity they give my brain to run free.

Friedriche Nietzsche once said: “All truly great thoughts are conceived by walking“.

#9 – You may know more than you think

I am no expert on expeditions and hope that I never become so complacent as to think that I am. But, many of the questions posed to me on the weekend struck me as being incredibly basic. But, upon reflection, perhaps they’re only basic if you’ve done them before.

It’s easy to take for granted the knowledge that we all have but don’t underestimate how useful that information could be to someone else who hasn’t done the things that you have.

Opportunities for such solitude and boyish, adventurous indulgences are rare in Central London but this was pure hedonism.