10 Tips For Your First Cycle Tour 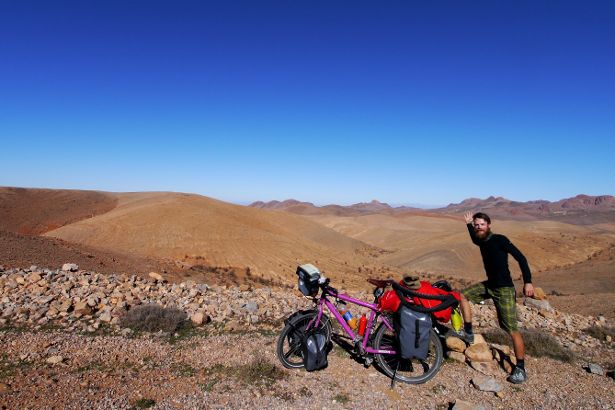 Some time ago I received an email from a chap called Markus, saying that he was thinking about quitting his job to cycle from Germany to Africa. I get emails like that quite a lot but this one was made more memorable by the fact that, some months later, I got a second email telling me that he had indeed quit his job and was already on his way to Africa.

When Markus heard about mine and Laura’s own plans to go off cycling, he kindly took a break from cycling to Togo to share some tips with us from experiences so far. And, in turn, I thought I’d share them with you…

10 Tips For Your First Cycle Tour

As I had no idea about cycling over a longer period so I started to follow the Danube cycle path. The Danube starts in Germany and flows through a couple of countries just until Romania. This was a great start as with every kilometre the journey got more adventurous by starting in Germany and ending in countries like Serbia, Bulgaria and Romania.

Furthermore following a river is a great thing to do. You barely can get lost and there are many places for wild camping. Finally I met many other cyclists on the way as the Danube cycle path is quite famous. Especially in the beginning in Germany, Austria and Hungary there are many bike shops, restaurants and small private hostels if you are looking for a change to tent and pasta.

Wild camping in Eastern Europe is pretty easy. Great landscape, few people, small villages, no problems. You can even drink the tap water in most of the countries over there.

Turkey is one of the best countries to cycle! Great people, great hospitality, good roads. I got regularly invited to tea and food. I
only cycled down the coast, but the inner part of the land should be really beautiful.

4) Don’t try to cycle each and every kilometre

Don’t even try to cycle each and every kilometre. If you feel like, just take a train, bus or boat. I did that two, three times in order
to find the way out of huge cities. For example riding a bicycle in the 14 mio. city of Istanbul is not fun. Just take a train for a couple of kilometres until you reach the end of the suburbs.

At this point, Markus offered us a place to stay in Germany. Rather than extend his offer to the entire world, I’ll instead recommend that any budding cycle tourists make use of the Couch Surfing website – Tim.

I managed to cycle all the way without any navigation system. I even cycled through Moldau, Ukraine and Turkey without maps at all. I found it pretty easy. But it’s of course up to you.

Stick to expensive Schwalbe Marathon/ Dureme tyres or similar products with protection layers. They will safe you much energy and nerves. I only had 6 flat tires in 8.0000 kilometres, partly on really difficult terrain.

Don’t forget your Thermarest repair kit! I almost had more holes in my Thermarest than in my tires. So better take a repair kit or  special plastic glue with you.  For over one week I woke up in my tent shivering as my Thermarest was drawn out and it had only 5 degree Celsius …

Instead of books I have many audio books on my MP3 player. I find it really relaxing listening to books before starting to sleep. An MP3-player saves you much weight, is cheap and really robust.

This is important: get a pepper spray! The only trouble I had on my tour were the wild dogs in Romania. I cycled through many small villages over there and had some trouble with these mean creatures!

I had absolutely no problem with dogs in Serbia, Bulgaria and other parts of Eastern Europe, but in Romania, they are wild beasts! Groups of big sheppard dogs chase everything that moves. From cars to horse-carriages and bicycle riders. I did not want to but I had to use my pepper spray three times against the attacks. And fortunately it works (Dog dazers do work partly. But if the creatures are already in rage you can forget a dazer).

Anyway, read my tips perhaps some of the stuff might help you. But most important don’t plan too much, the road will take you somewhere!

You can read more about Markus’ trip at www.4coffee2togo.com.

These other links may also be useful if you are planning a cycling expedition: