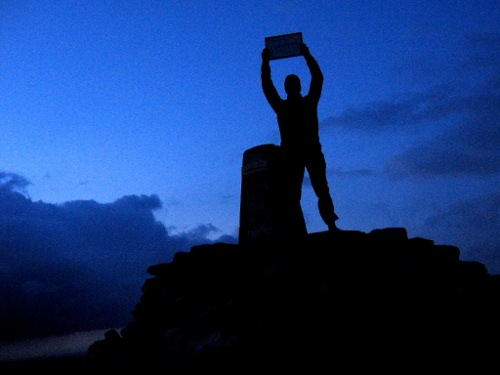 “Yes”, she replied, “No! Wait. What’s the plan? Are we actually swimming?”

“Full submersion. Anything else is a bonus”, I replied and ran excitedly into the sea.

I’m glad there was no one else around because I suspect our screaming would have caused no small amount of alarm. It was cold by any measure and we lasted some thirty seconds before sprinting back up the beach, our cries shifting from pain to joy without loss of volume.

We spent the afternoon walking along the recently finished Ceredigion Coastal Path watching the wild and craggy cliff faces meet a dark blue sea itself no less wild. The evening was whiled away listening to music in front of the fireplace and bashing out the occasional chord on a guitar. I was bought dinner in a local restaurant which felt like cheating – both within the rules of the game and as a friend – but which was consumed greedily with little protestation. The following morning we gorged on pancakes (OK, I gorged, everyone else just ate) and I was driven out of the village to resume my journey.

Not five minutes passed before I found myself heading north to Aberystwyth in an estate chauffered by a friendly couple in their fifties. On foot again, I set about hiking around the outskirts of the town to find a better hitching spot.

“I know you!”, I said happily when I recognised the lady stepping out of the driver’s side – the very same one who had dropped me at Aberystwyth an hour ago. They’d stopped for lunch and now were stopping for me. I couldn’t believe my luck but it carried me all the way to Llandudno where, sheltering at a petrol station I was swiftly ushered into the back of the jeep moments after swallowing the last mouthful of my afternoon’s cake.

Cruising across Anglesey where the new couple who ran a Health & Safety outfit lived, I mentioned that I did my undergraduate at University College London.

“Ah, another Gower Street boy, eh? Well, I wouldn’t leave a UCL lad in the valleys”, and with that, he drove me all the way to Holyhead Docks.

I’d looked up ferry prices from my friend’s house the day before and concluded that I couldn’t afford them. But I’d had my heart set on visiting Ireland – I’d never been there before and I thought that to reach Dublin on my tight budget would be a real coup – and still wanted to go. I’ve never been big on planning and I certainly didn’t want to spend my holiday sifting the internet for cheap tickets so I just decided to go to the port and see how I got on.

There was no doubt about it, thirty-four English pounds was a large dent in the expedition budget but I felt it would be worth it as my one big expenditure. Buoyed by an already successful day, I peaked out the window at the fading light and instantly had another idea.

“Excuse me, could you point me in the direction of Holyhead Mountain?”

I was excited and walked at speed towards the grandly entitled hill which rises directly out of the town and Irish Sea. The sky grew darker as the pavements rose up the hill and slowly gave way to fields and foot paths. I trotted gingerly along the rocks to gain a perfect and deserted summit minutes before darkness won over.