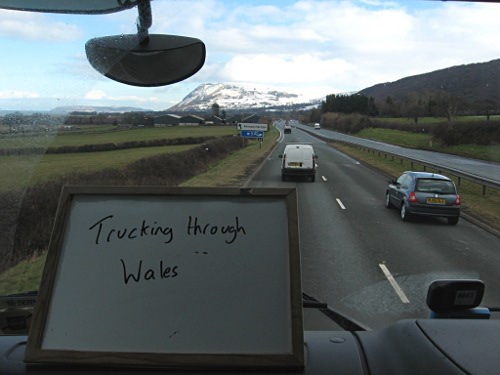 “Which way is it to the town centre?”

“Nothing to be sad about!”, I thought, and set off into the cold darkness of morning on my way to Dublin.

After ninety minutes of walking, I still hadn’t warmed up and most shops were still closed. Not that I had any intention of spending money in them, anyway. I breakfasted on porridge outside a castle wall and continued my mindless wandering in an effort to explore and regain feeling in my limbs.

You can do a lot in Dublin without spending a penny. As, I’m sure, you can in most cities if you put your mind to it. Tourist Information gave me a list and I set about ticking off as many as time and my ankles, now a little sore from all the walking, would allow.

Chester Beatty Library, Trinity College, Dublin Castle, National Museum of Ireland, National Gallery of Ireland and the Hugh Lane Gallery all filled my day fruitfully before I stopped in a central park to boil up some water for the evening’s meal. A little tired and with a few hours before I needed to walk back to the port, I set about finding a decent pub for my sole expenditure in Ireland: a pint of Guinness.

Refreshed, I marched back through Grafton Street and spent some time enthralled by an enthusiastic band busking. Re-tracing my steps through the industrial strips of road between town and port, I was torn between my two options for this bed tonight: the early arrivals room, complete with linoleum floor, strip lighting and bathroom facilities; or my standard bivuouac. It might have been a cold night but I knew it might also be my last.

Although in many ways not an idyllic location, lying down, as I was, a mere twenty yards from the road, I was tucked away behind a building with a starry sky above me and the sea behind. I awoke the following morning to frost on my bivvy bag but had kept warm through the night in all of my clothes.

The ferry whisked me back to Holyhead where I struggled to find anywhere remotely practical for hitching until I realised that, of course, cars coming off the ferry would be perfect. And they were. A Hungarian truck driver on his regular route between Dublin and Germany drove me all the way to the M6 where a middle-aged man in a camper van carried me north on his way to pick up his daughter.

I was aiming for a friend’s house near Preston and an hour or so after starting the 10-mile march to her house, her car came by and saved me the effort. Another bed for the night and a home-cooked meal to boot. The next day we drove south back to London and, having stuck well within budget, I treated myself to the short train ride home and opened the front door with a smile.

Quite unlike me, rather than leaving my bag to fester for a week or until the next adventure, I began to unpack immediately. Amidst the damp camping kit that had served me so well, the shoes which had claim many more miles and the camera with new stories to tell, I was pleased to find inside my wallet thirty pounds in change.