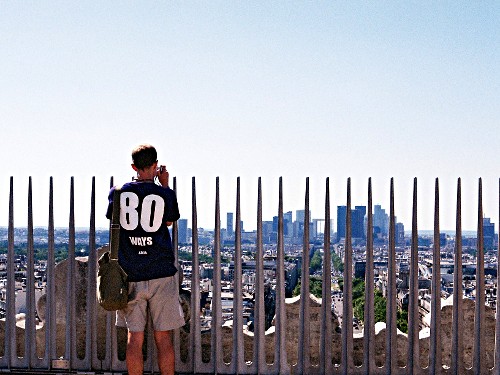 University College London gives out grants to people who can come up with expedition ideas crazy enough to get their attention. In my first year, I teamed up with my new friend Thom and hatched a plan to go to Kyrgyzstan and climb some mountains. We failed dismally in reaching the tops of any peaks but succeeded beyond our wildest dreams in having an adventure. The following year, Thom went off to the Isle of Skye and I landed another grant, which saw me being the first Brit to summit several Bolivian mountains. Now, we were back together and with a plan better than any before.

Sitting in a hut somewhere in the depths of Bolivia, suffering after a week’s worth of food poisoning, I huddled around a table with my expedition members and posed the question: ‘What do we do next year?’

The committee that voted on such applications knew my face by now and were not going to accept some half-arsed idea. It had to be good, and it had to be big. It had to be the world. But then, even the world’s not so big these days.

“How about, we have to see how far round the world we can get without any money. We have to hitch everywhere, convince people to help us out, blag it the whole way!”

“How about we go round without using the same method of transport twice… ?”

Now, that sounded good. A bit of a challenge there, but a realistic one. We brainstormed for a bit: Channel Tunnel, Trans-Siberian Railway, boat across the Bering Strait, etc. This was sounding promising.

“…and we have to use as many methods as possible!” someone chipped in.

“Even better, we have to use eighty, like Around the World in 80 Days!“

We continued our planning, working out different possible methods, how we could do it, and what routes were available. It was then that title was born, and I do not exaggerate this moment. It was profound even at the time. Ted’s brain was responsible for conjuring it up, and for that, he deserves all credit. I remember it well. The three of us sitting huddled around the little wooden table, Ted to my left and Sarah opposite me, Ted leaned back in his chair with his trademark grin across his face.

“I know what we can call it,” he said, eyes glancing either way in a conspiratorial fashion, just to check that no one was listening. And then his eyes fixed back on us as he announced the name I would be repeating to countless different people all over the globe:

He rested his arms behind his head and continued to lean back, his chair on two legs and on his face the wide smile of satisfaction worn only by a man who knows his last words were so profound that they were going to take at least a moment’s reflection before their impact could sink in.

“Around the World in 80 Ways.” He repeated it aloud, and he was still smiling. Just as I am now.