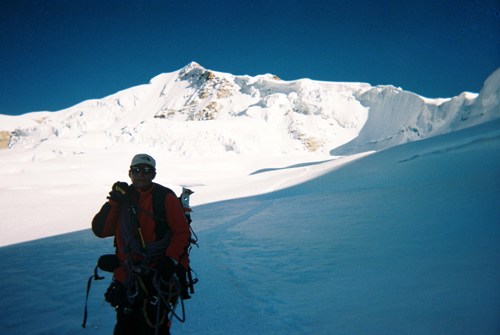 My friend Andy Ruck has just had his first book – Así Es La Vida – published and has very kindly offered me an extract for this website. The first instalment went up last week and the second is below.

Moments later a police truck screeched to a halt in the dust and out jumped Pedro Ortiz, a real-life, Hispanic incarnation of the police chief from “The Simpsons.” Only without the yellow skin and blue hair if you can stretch your imagination that far. We sat in the back of the truck as kids came out to stare at us and the policemen unhurriedly knocked on a few doors and asked if the occupant might have seen three youths but five minutes ago in possession of something resembling a battle-ship with carrying straps. It seemed that no-one had, and Pedro was quick to repeatedly stress that there was “poco esperanza,” little hope. So after ten minutes or so we were driven back towards Tucumán’s “Centro” and the local police station.

We gave our statements, taking roughly forty-five minutes to explain that Scotland and England were both parts of the “Reino Unido,” and were not completely separate countries but sort of regions of the one big country, but sort of a bit more than that. Okay, I admit that is confusing, and the shock and nerves of the situation rendered my Spanish virtually incapable of such complicated elaborations. Once we had established the political boundaries of the United Kingdom and tried to remember everything that was in my rucksack, Pedro began advising us on what to do if this should happen again.

“Sorry Pedro,” interrupted Carson at one point. “You’re saying we should buy a big knife and fight back next time?”

“Siiiiiiiiiiiiiiiiiiiii, claaaaaaaaro!!!” enthused the chubby-faced officer, as he did in response to most questions, reinforced by many wild gesticulations of his arms. He also recommended that next time we stare into the eyes of our attackers, which he unconvincingly assured us would scare them off.

“Los ojos son la ventana del alma,” he said, poetically. I tried to imagine a policeman down the local nick in Brighton advising, “See those eyes, mate? Window on the soul, I’m telling you…” but I couldn’t.

He continued the “eye” theme by repeatedly telling us to be careful, which he did by touching one of his eyes with a finger and stressing “Ojo, uh? Ojo…,” which he would do at the end of each piece of advice for several minutes, each time stopping to check that our heads were nodding sufficiently, until it was clear his point had been made.

While supposedly another policeman was out looking for the rucksack, Pedro insisted we accompany him to the small convenience shop-cum-café across the street and drink a “café con leche” with him.

We were left with little choice, and dared not even ask for “un café solo” instead. Pedro proceeded to tell us all about recent goings on in Tucumán, then about his wife and kids and the brand new mobile phone they had just bought him for fathers’ day.

We nodded in polite bemusement, uttering the odd “Si, si” at appropriate moments, all the while secretly wishing he was out there looking for my rucksack, lovely though his new mobile phone was.

Pedro had offered us a bed in one of the cells in the police station for the night, but we were eager to get out of Tucumán.

“Ojo, uh?” repeated Pedro a further six hundred times as he bade farewell to us at the gates of the police station. We walked back to the bus station where we had arrived in such good spirits that morning, flinching every time someone made a sudden movement, feeling jarringly uncomfortable every time an inquisitive look was directed at us. There were buses to Jujuy. As we were about to buy our tickets, however, we found out it was only a four-hour journey and that we would arrive there in the middle of the night. Then what would we do? It was too dangerous, surely.

It was getting dark in Tucumán. This time the previous day, we would have taken that bus and slept in the terminal, or even on the streets. Something would have worked out. But now we felt disinclined to risk it. Our gung-ho adventurous spirit had been badly shaken by the appearance of that knife blade. My new-found lack of a sleeping bag or even a warm jumper didn’t help either. Attracting unwanted attention to ourselves just had not seemed like a danger until now. Carson, for example, had been practising hand-stands on station platforms in Buenos Aires. The previous night, en route to Tucumán, I had walked around the small town of Deán Funes at 3am (“there was absolutely no life about the place…”) and not felt at all threatened in its dark, unlit streets. Now we felt vulnerable, like we wanted to hide in a corner, or be back home where we would blend in.

It was pitch darkness by now and we needed somewhere safe, inside, to stay.

“Best take a taxi to a hostel, eh?” said Carson. I pinched myself to check he’d really just said that. A taxi! That had been a taboo word until today.

We felt not as if the wind had been knocked from beneath our sails, but that our sails had been ripped down, our boat commandeered by knife-wielding pirates and all we had left was a tiny rubber dinghy with a slow puncture. Our possibilities now seemed to be severely limited – I had lost my sleeping bag, warm clothing, climbing gear – what could we do without that? Also, it was not just this material loss that we felt, it was the loss of our aim. The trip so far had been a headlong dash toward the Cordillera Real in Bolivia. All this mixing with the locals en route had been fun, but the mountains had been our overall aim, and we had been moving on quickly every day. Now what would we do? We could slow down, take it all in, keep talking to friendly locals. But it all seemed somehow pointless without a destination.

“You stole our purpose, man!”  joked Carson, shaking a fist in the rough direction of our attackers, but neither of us really thought it was funny. Now our time in this scary place stretched ahead as one dangerous, gaping void.

Así es la Vida: An Un-structured Voyage of Discovery in South America is on sale now.