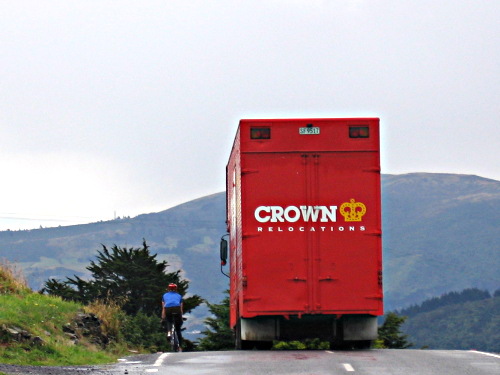 To one side of the road, mounted on the pavement, runs a two-way bicycle lane. Turning left into Priory Lane from Richmond Road, if you want to get onto the bike path, you have to cut across both lanes of traffic and mount the curb.

And that’s what I did.

Indicate, check over my shoulder, pull across and join the green brick road.

Moments later, a white van pulls along side, winds his window down and turns to face me. My hands twitch nervously at the breaks as I prepare for a verbal beration.

I used to jump lights. I’d go on both the green light and the green man. I’d pop up the curb and cut through pedestrian areas, swing down one-way streets and weave through traffic like a needle through cross-stitch. I was never deliberately reckless or out to prove anything but I certainly wasn’t a model cyclist.

But then I went to New Zealand and learned to love cycling as a recreation rather than simply a mode of transport and, by the time I returned, my approach had spun one-eighty. It may have been because, in New Zealand, the introduction of a local town’s first traffic lights made front page news and thus I had less to contend with. Or maybe it followed an introduction to bicycle karma.

I’d not heard of it before a friend explained the concept a year or so back. It’s simple: When it comes to your behaviour on tarmac with two wheels, you reap what you sow.

Cut up a taxi and riposte the driver’s fist with your finger, and you can expect to get splashed by the next large puddle. Scare a granny’s denchers out by slamming on your breaks inches from her a feet as a pelican crossing flashes orange, and brace yourself to get cut up at the next corner.

I won’t argue for the science or the logic behind this. I’ll simply put it out there for you to decide. But, whatever the cause, I don’t skip a red light any more (if I’m in a hurry I’ll run and push). If I cycle on pavements it’s only on quiet ones and then I’ll do it very slowly. And I try to keep traffic dodging to a minimum (for my own sake as well as everyone elses).

My gut clenches with my fists. I hate aggressive encounters and a white-van-man addressing a cyclist is going to be nothing but.

I’m not sure where this is going.

“Not like this other t***”, he continues, gesturing to the lycra-clad enthusiast in front who’s ignored the bike path and is slowing down traffic.

“Good on ya!”, he shouts back at me as he presses pedal to metal and skirts around the road warrior in front.