Book Review: Call of the White by Felicity Aston 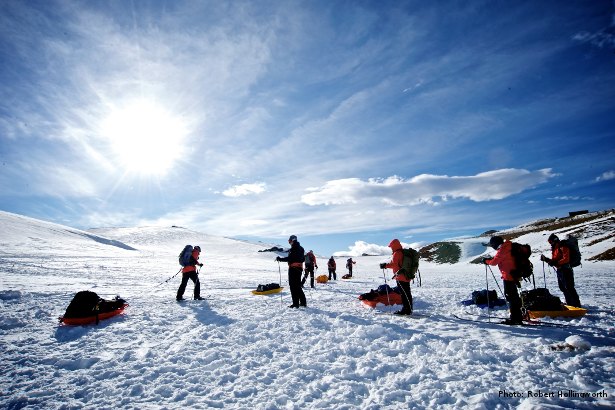 Call of the White: Taking the World to the South Pole, is Felicity Aston’s account of her project to create a team of women from eight different Commonwealth countries, with no polar experience, and get them all to ski to the South Pole.

This included taking women from places like Jamaica, Brunei and Ghana – not countries typically associated with cold weather exploits – to Antarctica after only two short training expeditions in Norway and New Zealand. The culminating expedition was only the final step along a bumpy road which included trying to gather applications from far flung countries by giving interviews on local radio stations, obtaining visas and blessings from high commissions and embassies, and generally trying to coordinate a huge project across seven time zones using email and Skype.

I was particularly keen to read this book, firstly because I knew some of the participants – apart from Felicity, who I’d met a few times through BSES, Helen Turton, who represented the UK, is a friend of mine, and various other familiar names crop up throughout the book, Guy Risdon doing the first aid, and Steve Jones sorting their Antarctic Logistics. I was also drafted in to work as the UK Support for their expedition so had an added interest in hearing how it all went.

One of the things that struck me was just how they went through on the ice that never made it back to me. I was the one that took their phone calls and uploaded their blogs and podcasts to the website every day but most of the stories were still news to me. A testament to the professionalism and collective brave face of the team.

In fact, Aston’s professional approach and leadership shine through throughout the book. She meets her fair share of doubters along the way – no doubt sceptical about a “bunch of girls with no experience” trying to play with the big boys down in Antarctica  – but she rises above them all with confidence (unlike the others, Aston has a wealth of expedition and polar experience).

Aston’s journalistic skill is evident in a well put-together book that flows easily and doesn’t suffer from any of the common pitfalls of expedition story telling. It must have been a difficult task to give a fair and accurate account of all that went on amongst the team but, as is evident from the thought processes laid out on paper, Aston is a thoughtful character who carries a responsibilities seriously.

What is refreshing about this story is that although Aston does of course end up skiing across Antarctica, you get the real feeling that this was never a project about her. It was not a just a handy marketing ploy to get another idea funded. You get the clear sense that she was trying to do something different and to make a statement, not just to her seven team mates but to women throughout the Commonwealth and people across the world. A wonderful and empowering story.

Call of the White by Felicity Aston is available now on Amazon.