Home Tim's Adventures You’ve Got to be Careful in India

You’ve Got to be Careful in India 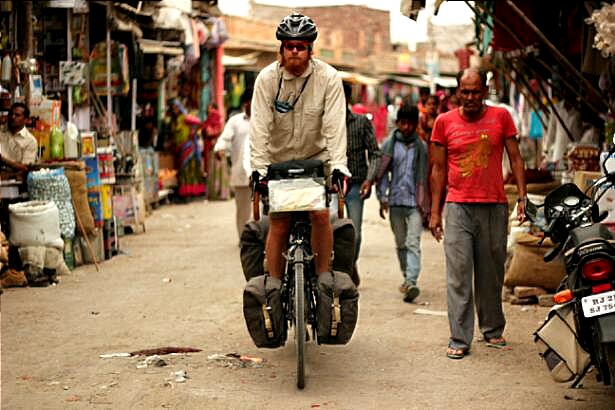 They say you’ve got to be careful in India.

Everyone’s out to rip you off. Even the locals get overcharged and they’ll see you coming a mile off. You can’t trust any food and don’t even think about trying the tap water. Even the purified stuff gets tainted by leaky sewage pipes and as little as a drop on your toothbrush could leave you with a parasitic infection for years to come. The roads are crazy too. A huge interconnected network of death traps where an accident lurks around every corner.

Having read this sort of thing, you can probably imagine the trepidation we felt as we landed in Ahmedabad, already fish out of water by virtue of having to lug our bikes in boxes rather than wheel them fully assembled, braced for the onslaught of a terrifying country.

After a couple of weeks in country though, perhaps we could reassure you by saying that the shop keepers may overcharge in the tourist hotspots but it’s all part of the game and haggling is fun. We could tell you that the food is delicious and perfectly safe if you choose carefully. And the water? It’s not as bad as they say. Locals drink it. It just takes a bit of getting used to. The roads, we could say, may be pretty crazy but they’re no more dangerous than anywhere else we’ve been.

But, sadly, the reassurances of the previous paragraph would be no more accurate than the overcautious warnings of the first.

The truth, as far as we have experienced it in our time here, is somewhere in between. This is how we have found it so far:

This is absolutely standard and there is no shame attached to its practice. We are routinely charged a slightly inflated price for most items purchased but have since discovered prices printed next to expiry dates on most products. The shop owners don’t bat an eyelid when you give them less than they ask. The price increases are usually just a few rupees but it’s draining having to double check everything, baffling to see how shamelessly it is carried out and hard to fight the cynicism that ensues from being routinely taken advantage of.

The caution advised with regard to Indian drinking water seems to be well founded. You body might adapt to some of the stomach bugs but you’ll never get used to giardia or some other nasty parasite. Thankfully, bottled water is cheap and usually comes with an additional plastic seal so you know it hasn’t been refilled from the tap by an Indian Del Boy (though this didn’t stop one such bottle I bought having a number of dead, floating ants inside). We’ve drunk tap water in the other 15-odd countries through which we’ve travelled so the situation here is by far the worst.

Of course, bottled water has its own environmental issues attached (particularly given disposal methods here – see below). Where possible, we sterilise tap water with an ultraviolet Steripen.

There is indeed plenty of delicious grub to be had but, sadly, the hygiene standards are as low as the prices. High streets and shop fronts are consistently covered in cow shit. Cafes and kitchens outside of tourist sites are black with filth and infested with flies. Utensils are cleaned with a cursory splash of (toxic) water and foods frequently served by hands of questionable cleanliness. Indeed, neither of us had been sick once in seven months of travelling but both fell ill in within a fortnight of arriving here.

Rubbish disposal is a real issue too. Most cafe owners just chuck their empty plastic cups and bottles onto the floor of their own premises and wait for the wind to take it away, and encourage us to do the same when we ask.

In towns, the traffic is certainly the most chaotic we’ve seen. A situation not helped by the routine presence of camels, goats, pigs, rats, water buffalo and, in particular, cows; not calmed by the utterly relentless use of the horn; and not mitigated by the enforcement of any kind of discipline. However, traffic is slow, bicycles are common and all drivers seem entirely used to unexpected objects and erratic driving patterns.

I said shortly after I arrived that I thought I hated India as much as I loved it, and I stand by that a few weeks later. I find it infuriating, stressful and horrible but it is also stunning, fascinating and captivating at the same time. Don’t believe all the horror stories but don’t be tempted to romanticise it either.