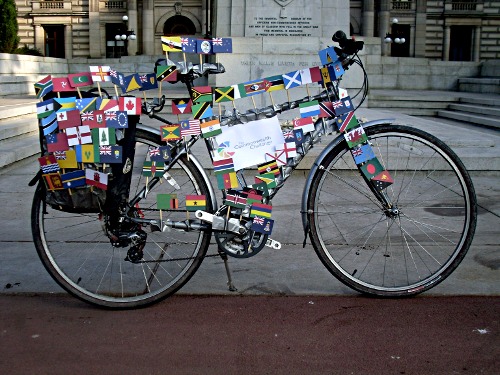 Sean Newall is preparing for his first of four grand expeditions which will take him through all 72 Commonwealth countries. Expedition number one will see him cycling 20,000 miles around the world from Glasgow.

And what makes this different from the many other people cycling around the world, you say? Well, Sean is hoping for some company.

Can you help him?

Along the way I am trying to get 10,500 people from around the world to join me for a five mile cycle.

When I set off on the 23rd of July I will have a tracker accurately stating my position so that you will be able to follow my progress. This will allow you to get in contact for when I get close to your town or city to organize a five mile ride together.

Please pass this information on as the goal of reaching 10,500 can only be achieved with help from as many people from around the world as possible.

All to often expeditions are asking for one thing and one thing only: money. It’s a great shame when expeditions fail at the first hurdle due to financial problems but the reality is that most of us aren’t in a position to give up our hard earned cash for such causes even if we wanted to.

However, I reckon most of us have the time and ability to help Sean on his way to an ambitious goal of 10,500 cycling partners. And if you don’t, haven’t you got some friends that might?