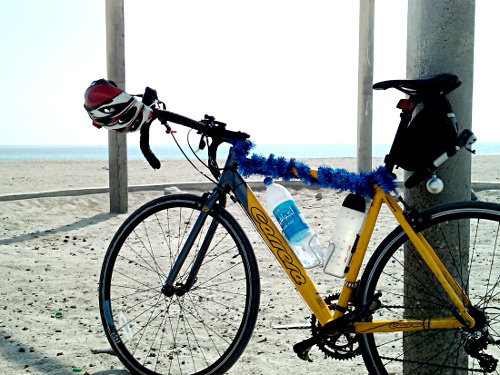 Excitement quickly penetrates lethargy as the alarm sounds early on Christmas morning. Waking swiftly not to open presents but to ensure we have enough time for a 90 mile bike ride.

And it wasn’t actually an alarm that woke us first but the sound of fishermen and the cacophony of seabirds outside the tent we’ve pitched on the beach. We’re on a desert island with the intention of completing a circumnavigation before the sun goes down.

It may still be winter here but it’s never that cool in the Gulf so we jam large plastic bottles of mineral water onto our bikes before setting off with pockets full of mince pies.

There is a single road running around the circumference of Masirah island which was just as well since we had no maps. There was a single town some 60 miles into our journey at which we planned to refill our water bottles and refuel our bodies. Until then, we were on our own.

Well, on our own but for the passing holiday-makers in their 4x4s and fishermen in their pickup trucks, never failing to sound their horns in appreciation at a distraction from an otherwise monotonous road.

“I think I’ll be the first cyclist to suffer from inner-thigh tinsel-chafe”, Laura commented in reference to the decorations we’d added to our vehicles for the day. The baubles on the back, we later realised, were also responsible for the incessant clicking noise that had puzzled us for so long.

Masirah is well known for having high winds, facing, as it does, the Indian Ocean. But, I rationalised, with our ride being circular, that should mean that it could only work against us as much as it did for us. That, however, did not seem to be the case as the noise in our ears continually increased and the numbers on my speedo did the opposite.

We sought shelter beneath a damaged beach hut and enjoyed a glorious Christmas lunch of some bread from my back pocket and a few chunks of triangular processed cheese. No turkey, no stuffing, no gravy, no spuds. Not even a brussel sprout. But, boy, did those mince pies go down easy. Quick swig of water – not too much, got to ration it until the refill – then back on our way with a little more sand in our shoes.

The compass spun slowly right as we rounded the northern headland where the rare introduction of a decision into our day in the form of a roundabout threw us a little and we ended up bypassing the one town on our route. It was about a mile in the wrong direction to go there, not to mention back, so, sheltering beneath the shade of a ‘Turn Left’ sign, we sank a few more millilitres of our dying supply and pressed on.

The heat remained and from there onwards we measured our fluid intake in squirts from the one remaining bottle. Our heads pounded, our stomachs churned and our spirit levels wavered.

The honks of passing motorists, at first motivating, were now the source of inexplicable irritation and the effort to return a wave almost too much. We collapsed roadside and chewed at length on the driest of biscuits. On our bikes again, our speed was pathetic. Like the frog who can only hop half the distance to the other side of the road, the closer we got, the slower we went so that I feared we’d never make it.

Bearing it no more, I flagged down a passing car and received the best Christmas present of all: 500ml of water. Fuel enough to see us home.