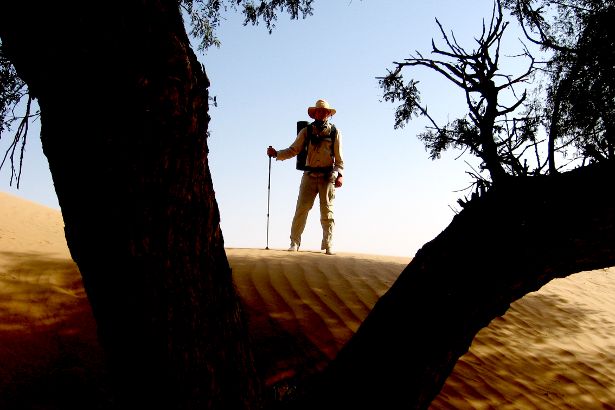 I didn’t write the entire contents of my book all on my own. I had help. Here are the great people who assisted me with the chapter on How To Cross A Desert:

Charles Foster is a traveller, author, barrister, and a Fellow of Green Templeton College, University of Oxford. Much of his life is spent in deserts. His desert experience includes expeditions in the Sahara, the Sinai and the Danakil Depression. He has also run the Marathon des Sables and skied to the North Pole.

Charles wrote a ‘Day in the Life of a Desert Explorer’ story for the chapter.

Sam has led over 100 trips into the desert. After six years living in Namibia, training and workingas a desert guide, he walked solo and unsupported across the dune sea of the Namib desert in 2002. He has since led an unsupported expedition up the Skeleton Coast to Angola.

Louis-Philippe is a Belgian adventurer who has completed several world first, solo, unsupported treks in remote regions of the world including walking across Iceland. In 2008 he completed a north-south traverse of the Simpson Desert in Australia carrying all his supplies in a cart.

Sam and Louis-Philippe were the two experienced contributors who helped with my chapter and corroborated the information.

The following people provided their one ‘top tip’ for anyone considering their first desert journey:

Helen Thayer – Who has walked across the Sahara, Death Valley, and the Gobi Desert amongst others

Jeremy Curl – Who travelled 2000km across the Sahara with camels

Lucas Trihey – Who crossed the Simpson Desert with a cart

Michael Asher – Who has travelled some 30,000 miles through deserts with camels including a nine month west-east crossing of the Sahara

Julian Monroe Fisher – Who has run vehicle expeditions to the Atacama, Kalahari, Patagonian, Syrian and many other deserts

Ripley Davenport – Who was walked in and across the Namib, Kara-Kum, Thar and Gobi deserts

Includes the chapter ‘How to Cross a Desert’.