The Dogs in Greece 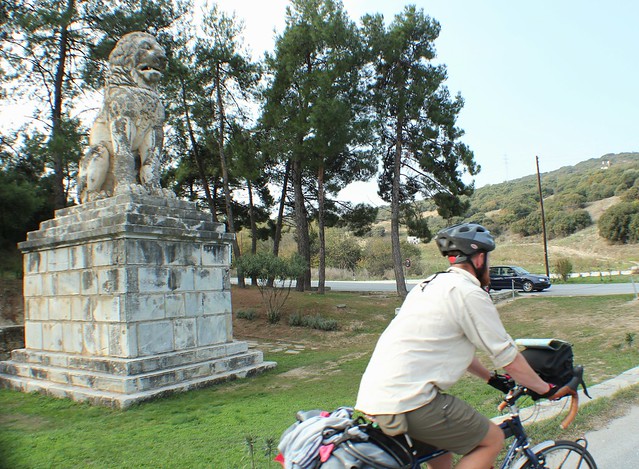 The sun was high and so was morale as we cruised side by side on the current of a tailwind. We were in Greece, on bikes and life was good.

Good, at least, until a hand gesture changed everything.

Laura spotted it before me. This wasn’t the first such encounter – in fact, they were sufficiently common that we’d developed our own signal – but they never got any less terrifying.

Cautiously we maintained the same cadence to avoid drawing attention to ourselves but the air was thick with tension now and we rode stiffly on tensed muscles.

The petrol station was still twenty yards ahead and our tormentor-in-waiting hadn’t yet spotted us. We gradually began to press harder on the pedals in an effort to build momentum – we’d take any tiny advantage for the inevitable conflict – but we had to be careful. Any noise could spark violence.

We drew parallel to the entrance and level with the enemy. In fact, we were sailing past and the sucker hadn’t even noticed us! We exchanged a glance with raised eyebrows. Maybe we’d made it.

I looked over my right shoulder and therein lay my mistake.

Our eyes locked: cyclist and guard dog, hunted and hunter. His activation began. Ears pricked erect, head swiveled like a satellite dish honing on its target, a single bark of aggression and he was off.

“Go!” came the cry, a command as obvious as it was unnecessary. I stood up on my pedals and pushed down with all my might but the dog was belting towards us at a rate of knots we could never match.

In the ensuing melee I almost crashed into Laura. Having swerved to avoid me, she was left dangerously close to the gnashing teeth and Rover didn’t wait to be asked twice.

Confused by the unfamiliar sound at first, I soon realised that it came not from the dog but from Laura. Part fear, part defence mechanism, the roar stunned our assailant for a moment and that was enough. We accelerated and the petrol station and its guard shrank into the distance. We were home free.

Elated and still high on adrenalin, we contrived a high-speed, high-five and congratulated ourselves on surviving another dog attack unscathed.

We pedalled onward and, just as I allowed my thoughts to wander onto tonight’s inevitable Mediterranean feast I noticed something in the distance. A large sign poking through the trees and, just perceptible through the haze, another petrol station…