A team of six people completed a climbing expedition in the Quimsa Cruz range of Bolivia – the smallest, lowest and least explored cordillera in Bolivia offering good potential for new alpine-style ascents. We spent three weeks in the mountains during the summer of 2004, establishing a base camp and embarking on a number of routes. As well as repeating ascents of mountains close to our base camp, we believe we achieved at least two new routes and several first British ascents. 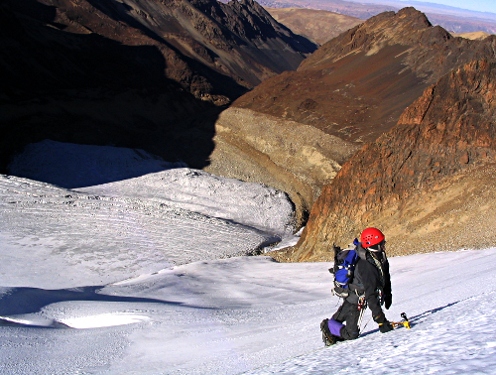 This report was produced by Sarah Griffin who led the expedition on which I was a member. You can see the original report in the window below (lots more information, photos and route maps) or on her website. More general information is available here. For questions and information, contact me.

“In November 2003 I attended Explore 2003 at the Royal Geographical Society. This excellent weekend seminar is devoted to planning expeditions. I had wanted to climb in the Andes and had some unformed plans to go to Bolivia. During the weekend I arranged to speak to Stuart Halford about Mountain Leadership; I was concerned that I did not have sufficient skills to lead a group to the Greater ranges. He was reassuring, explaining that it was important to have realistic aims, within our abilities but that it should be possible to plan an expedition. He pointed me in the direction of his expedition report, “Lakeland Quimsa Cruz 2001 (MEF 01/27),” and suggested that there was still potential for new routes in the Quimsa Cruz.

The more I read about the Quimsa Cruz,the more sure I was that this would be a good destination. Five people agreed to join me. With under a month to write sponsorship applications to UCL, the BMC and MEF, we put together a proposal to climb in the Quimsa Cruz.”

The Cordillera de Quimsa Cruz is the smallest, lowest and least visited of the four Bolivian Cordilleras. It is about the size of Snowdonia, but at an altitude of over 4000m with ~ 80 peaks between 4900m and 5800m. This range is composed of intrusive massifs of graniodiorite rock, providing, in the North of the range, some of the best rock climbing in (according to the guide books!). The south of the range is glaciated and alpine-style ascents are possible. The Quimsa Cruz starts ~ 80 km South East from La Paz. By road, it is an 8 hour journey.

The Quimsa Cruz is rich in tin and has been mined extensively. The village of Viloco, in the north of the range, is an old mining settlement. With the cheap price of plastics, Tin is no longer as financially viable as it was. A few miners remain working in the area, gaining a subsistence income. The local people are Aymaran.

We were attracted by the relatively few expeditions to the Quimsa Cruz and consequently the potential for achieving new routes. We also decided to attempt to research what routes had been climbed in the area and try to collate the existing information. As John Biggar writes in his guide book, ”There is more confusion over names and heights in the Quimsa Cruz than in any other area of Bolivia.”

After arriving in La Paz, Sarah contacted Carlos to arrange our travel needs. To save money we had wanted just one jeep. However, we were convinced that it was impossible to carry all our equipment in the same jeep as us. On the day of departure we were able to load the fifteen odd bags and sacs onto the roofs of the two 8 seat Toyota Land Cruisers which gave us plenty of room. We were accompanied by three drivers and were on our way.

The journey took approximately 8 hours including a stop for lunch. Tim later regretted the chicken sandwich he obtained en route. The road south from La Paz was good; it had a good surface and we made quick progress. The route involved travelled South and then turning North-East. The surfaced road eventually ran out and we continued along dirt roads. When we arrived at Laguna Larum Khota, it became obvious there was no way we were going to be able to drive around the lake, as we had hoped. After a brief attempt at driving around the North side of the lake, we spent an hour trying to prevent the Toyota sliding into the lake and reversing it to the road. We set up two tents near the road, on the South side of the lake. We began to transfer our bags by foot the next day. On the third day in we had completely moved base camp to the other side of the lake.

Near our camp, we established toilet facilities and designated a cooking area. Initially water was collected in large containers for drinking and cooking, but due to low temperatures the water remained frozen much of the morning. The team members paired up into the three tents, but the cooking responsibilities remained a group activity. We made some shelter to cook in using rocks but this wasn’t very successful. We lacked a sheltered area where we could cook and get together. Nightfall usually meant returning to our tents!

Our stay alternated between rest and active days. On rest days, most of our time was spent cooking. JC’s Chinese delights were greatly appreciated. He’d managed to bring along extra cooking ingredients including pork belly and some very strong sauces. Eventually we used the flour and yeast we’d brought. There was an attempt at bread, the day Sarah made donuts she was very popular and Matt and JC’s pizzas were another highlight. Another favourite rest day activity involved trying to clean ourselves as best as we could.  Our efforts here were hampered by the cold. It was practically impossible to bathe in the stream or the lake as the water came directly from the glacier and any time spent in it would have given us pneumonia! We also did our laundry and tried to dry our clothing in the brief midday sunshine. Frozen socks and long-johns became a campsite decoration.

All the routes that we climbed were one day long from our base camp. We were soon disappointed to discover that the metamorphic rock in our chosen location was very loose. Consequently, all our attempts at climbing the rock were very frightening. The snow and ice, however, was in excellent condition.  As there had been little snow fall over the previous summer, the avalanche risk was minimal (Route 8 was the exception to this.) and the glacier was almost dry. In addition to the following list, we also went for a few shorted walks during rest days or when the weather was less agreeable. We believe routes 6 and 8 to be previously unclimbed.

Browse the window above, download the PDF or visit Sarah Griffin’s website – QuimsaCruz.info. If you know anything about this area or are planning a trip there then please get in touch.