Home Advice Articles How To: Use Supermarket Food for Sports Nutrition

How To: Use Supermarket Food for Sports Nutrition

SYNOPSIS: This article details simple, cheap and natural alternatives to isotonic sports drinks, energy bars and energy gels. The purpose and weaknesses of each engineered product are analysed and substitutes are offered with an explanation of why they are as good or better.

Enter any race these days and you’ll invariably be handed a sports drink at some point during the event.  It’s possible that you’ll feel pressured to neck an energy gel on your way and you’ll quite likely find an energy bar in your goody bag at the end.

There is a common perception that we need these products if we want to compete in races when, of course, we don’t. They are simply one of many options and, quite often, not the best.

The problem is that manufacturers of “sports nutrition” supplements no doubt have to strike the balance between a genuinely useful product and one that suits the average consumer e.g. looks good, tastes good and comes in a neat package. The result is that they’re not always designed as effectively as they could be for genuine sporting nourishment and they often have added ingredients or increased processing to make them more saleable. Good for profits but not for us. 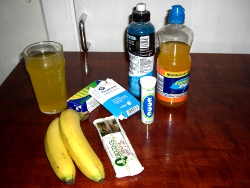 Below I will take a look at a variety of different sports supplements, explain what I think they’re supposed to do and why I think they could be better. Then I’ll offer a range of alternatives which you can pick up cheaply from your supermarket which are just as good, if not better, and for the most part, simpler and more natural.

In addition to providing you with fluid, sports drinks are supposed to replace the salt and other minerals (or “electrolytes”) you lose when exercising. Most of them contain some carbohydrate too. The term isotonic means that the sugar and salt levels are supposed to match those of your blood plasma.

Presumably designed so that they taste good when pitted against a fridge filled with cans of Coke, sports drinks are invariably sweeter than you want when you’re really exercising, don’t contain enough salt and do contain a lot of things you don’t need. For example, Lucozade Sport and Powerade both contain an unpopular sweetener called aspartame, and Gatorade is often made with Brominated Vegetable Oil (not that bad, perhaps, but then you wouldn’t add it yourself, would you?).

Also, although you will undoubtedly want carbohydrate when exercising, you may not want it in the volume and style dictated by a prepared solution. Lastly, many of them contain caffeine. Personally I wouldn’t want that as part of my routine diet and, even if you do, as with carbohydrate, you might be better controlling it separately.

You may not have heard of it but coconut water is available from most supermarkets and is a wonderfully natural isotonic drink (though not necessarily cheaper than the engineered varieties).

It has twice the sodium of most sports drinks and over ten times the potassium (both important minerals when exercising). It does have less carbohydrate but, as mentioned above, this is no bad thing as you can supplement it separately.

Coconut water is also linked with myriad other health benefits and is so similar to blood plasma that it’s been used for intravenous hydration. And whilst this may not help you win your next race, it certainly reads better than the confusing ingredients list of most sports drinks.

One sure fire way to get all your rehydration salts in one fell swoop is with Dioralyte (or non-brand name equivalent). They are readily available, very cheap and easily carried around to mix with water when you need it. And you can bet that they haven’t added any junk to make them taste good because, well, they don’t.

Don’t get too carried away with the complicated science of all this. Unless you are doing exercise that is both prolonged and intense, a bit of dilute squash or fruit juice with a pinch of sea salt will do the job. If you can taste the salt then you’ve probably added too much.

Why sea salt? Because table salt is pure sodium chloride whereas the sea variety has lots of those other minerals you’re after. It’s still easily and cheaply obtainable from high street shops. 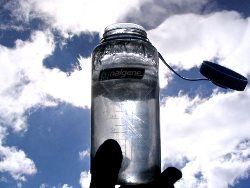 Give you the energy you need for exercise. They’re designed to pack a lot of calories in a mix of fast and slow release carbohydrate without too much fat (which is a bit slow burning for most exercise) or protein (which you only need over longer durations).

In what they’re designed to do – give you the right kind of calories for exercise – they’re fine. But they’re usually no better at this than many other natural or cheaper foodstuffs, frequently contain less useful nutrients beyond the basic calories and are often filled with lots of weird ingredients that you just don’t need to put into your body.

Cheap, tasty, packs a punch, full of nutrients and comes in its own handy case. They’ll typically deliver somewhere between 100-200 calories in a mix of quick and slow release carbs, have only a trace of fat and they’re great for the potassium your weary body craves.

The banana is always touted in these situations for one reason: it’s really good.

They may not be as natural or nutritionally complete as the banana but nor are energy bars and at least these are cheap. What makes them good beyond their value is their high carbohydrate to fat ratio. Jaffa Cakes are often used as good examples for a sports snack but the fig roll is nutritionally very similar, has a far shorter ingredients list and, being about one-third fig paste, is one step closer to real food.

Even it’s simplest form – oats, butter and golden syrup – the humble flapjack is pretty good for sport. But switch the syrup for honey, ease off the butter (use soya milk if you’re a real purist) and throw in a banana and you’ve got an exercise super food.

Honey is absorbed much slower than syrup and other sugars and it also packs in a few vitamins and minerals (like the potassium and sodium mentioned above). Oats provide an even longer, slower energy release and, whilst not directly relevant mid-training, they also lower cholesterol and provide a good source of fibre. And bananas? Well, we know how good they are.

Shop-bought stuff is fine but making it yourself is better. 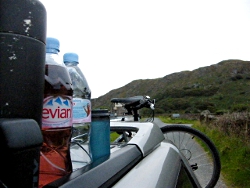 Give you quick release energy that is easily digestible during intense exercise.

A quick burst of energy invariably means a slump afterwards and the “easily digestible” part is slightly undermined by the fact that they often cause upset stomachs when you’re not used to them*. More to the point, however, is that the scenario in which you would ever “need” such a nutritional supplement is very rare. If your exercise is not intense then you’ll probably be fine with one of the alternatives from the Energy Bar section above and, if it is that intense, it probably won’t last long enough to need many calories.

But, for those situations when this sort of thing might be appropriate, here are some other suggestions.

(*You could, of course, use them regularly and get used to digesting them but then the same applies for other food stuffs)

Apricots, dates, figs and other dried fruits give you a quick hit of energy alongside a slower release to avoid the low-point afterwards. They are cheap, easy to get hold of and all natural. They also throw in a good mix of minerals you’ll need for longer exercise and some vitamins to boot.

These are almost entirely made of sugar and will thus do a very similar job to energy gels in providing a quick hit of energy in an easily digestible format. Lucozade Body Fuel Gel, for example, is 89% glucose syrup and the only other ingredients, besides water, are there to colour, preserve and flavour. Why pay through the nose when you can get jelly babies on buy-one-get-one-free next time your filling up your car?