Into the Empty Quarter – Film Review 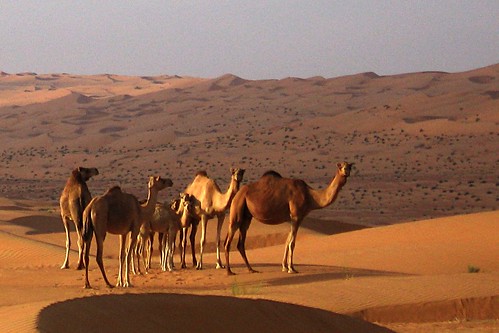 Over Christmas you may have caught a film about Ben Fogle and James Cracknell crossing the Empty Quarter desert. No doubt their film had the perfect blend of emotion, drama and eventual tear-jerking success – I have no idea, having been holed up in a hostel in a corner of Georgia at the time it was broadcast on the BBC. I also do not doubt that it was well funded and had a significant team of people behind the scenes researching options, filming and editing the final show.

What you may not have realised is that Fogle and Cracknell were following in the footsteps of earlier, great British adventurers. Al Humphreys and Leon McCarron crossed the Empty Quarter just a few months before the two blokes off the telly did, and also made a film about it. Their trip was low budget, low key and low tech: using a homemade cart with a wonky wheel they simply walked out into the desert and carried on for 45 days until they reached Dubai. Unlike the celebrity pair (sorry Al and Leon, but until you’re invited on Celebrity I Need To Be Humiliated To Further My Career, you don’t qualify for the moniker), they didn’t take camels and did all the filming themselves: no support crew, no film team and no escape from the desert.

Al and Leon were inspired in their journey by Wilfred Thesiger, the English adventurer and author of travel writing classic, Arabian Sands, who explored this region extensively last century. This massive patch of nothingness covers most of the Arabian peninsula, spreading into Saudi Arabia, Oman, Yemen and the UAE. Like Thesiger, the pair crossed the Empty Quarter from south to north, starting in Salalah and ending in Oman (although for visa issues they were unable to cross into Saudi).

The pair obviously get on well and their shared sense of humour is brought out in the film – always a pleasant relief in tales of hardship and suffering. They seem to spend much of their time following roads, which we know from experience may be physically easier but is a huge mental battle, as you question what on earth you’re doing with trucks thundering past in the same direction you’re crawling. I am led to believe that one of the reasons for this route choice was that they realised their cart couldn’t cope with being dragged over sand: a fact which underlies the hilariously brilliant amateurishness of the whole endeavour. Watching Al and Leon arrange emergency surgery for their cart to enable them to steer it (they actually set off from Salalah before they realised this issue) makes you realise that they’re just ordinary blokes, muddling through. To me, this is far preferable to watching a film about a slick, well-planned expedition with a large support team: if Al and Leon can do it, perhaps I can too.

The film itself is beautifully shot and well edited. The cinematography is fantastic, capturing the timeless beauty of the Arabian desert. The vast expanses of wilderness with its endless rolling dunes and stark colours make for a film which is a visual treat. However, the duo have avoided any hint of a cliché by also documenting the modern reality of the Arabian desert. Truck stops, oil rigs and grimy pockets of urbanity are what sustain life in today’s desert, but are less often depicted in tales of adventure.

We lived in Oman for six months a couple of years ago, and drove across some of the landscape that Al and Leon crossed on foot. We also walked across a very small Omani desert, the Wahiba Sands, so have some (very limited) idea of what desert travel on foot is like. The film is an authentic, real account of desert travel in today’s Oman and Al and Leon’s trip provoked a huge yearning in us both to return to the region – so much so that we’re planning a diversion through there on our bikes. We now just wait for the announcement from Fogle and Cracknell that they too are cycling round the world, following the illustrious footsteps of Humphreys, McCarron, Moss and Moss.

You can buy the film on DVD or download it here.

Fancy crossing a desert yourself? Tim’s book contains everything you need to know, from how to buy a camel to how much water you might expect to drink. Read a taster here.