Home Next Challenge Grant Kayaking Across Kosovo and Albania

Kayaking Across Kosovo and Albania 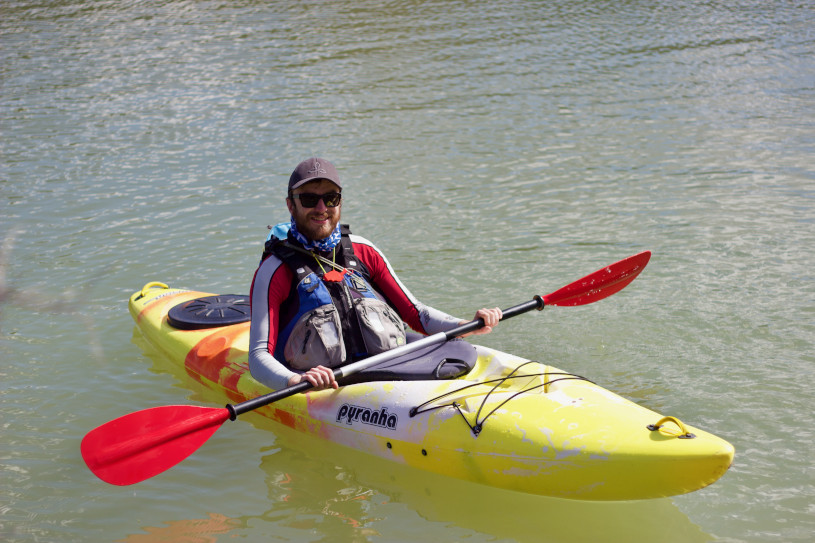 Grant winner Val Ismaili and his friend Mark (pictured above) have recently completed a kayak descent of the Drin River, which runs for 200 miles through Kosovo and Albania.

Val’s trip was supported by The Next Challenge Grant, an annual bursary for aspiring adventurers. 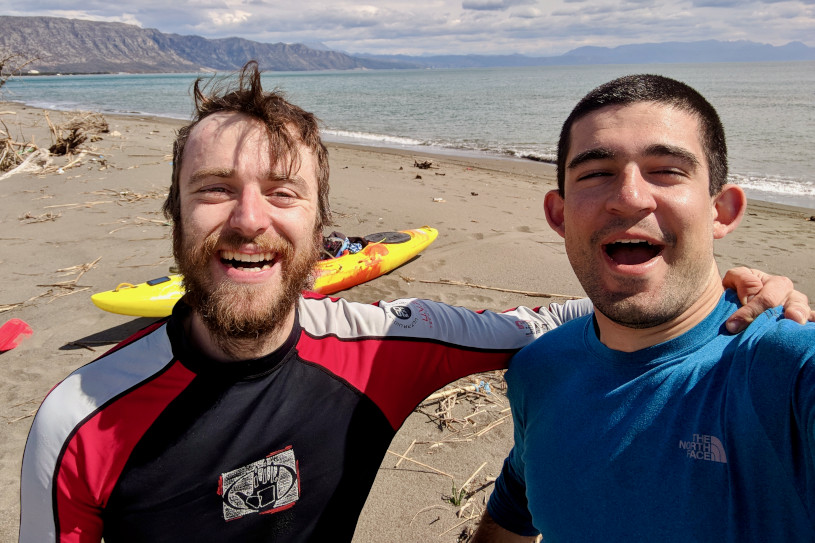 This Easter my friend Mark and I completed the first source-to-sea journey of the Drin river, through the countries of my heritage, Kosovo and Albania. Last year I spent my summer on a four-month adventure through the Caucasus – on my return, I found adjusting back to student life in Bristol a little tough. I slept in my dirty sleeping bag on my bedroom floor and would walk laps around my neighbourhood. Come February, I had somewhat readjusted (was now sleeping in a bed) but was longing for something ‘crazy’ to do (as my mum likes to say). Realising I had three weeks off for Easter, I figured I’d avoid revising for my upcoming finals by spending two weeks on an adventure. This is where the idea of the Drin source-to-sea began.

I’m not a paddler by any stretch of the imagination. I walk a lot, run a fair bit and occasionally climb, but very rarely do I get in a kayak. So rare in fact, that before this trip I had only been in a kayak a handful of times; three of those times were in a lake. I had done my research though; the river appeared straight-forward enough for a novice as there were no significant rapids after the initial few kilometres from the source. I decided to invite my friend Mark from University, who a few years ago attempted to paddle from England to Finland via the sea. Mark enthusiastically agreed, and said he’d teach me basic self-rescue techniques when we were on the water.

About a month later on March 29th, we found ourselves accompanied by my cousin Drilon (who lives in Pristina, the capital of Kosovo) at the source of the White Drin in the Western mountains of Kosovo. As expected, the initial few kilometres saw the river expand from a narrow slow-moving stream to a rather intimidating, fast-flowing river, hurling itself over a large waterfall before transitioning to sustained white-water littered with obstacles – certainly beyond our experience level and, given that we forgot to pack helmets, probably not a good idea to attempt. As such, we spent that first day walking along the riverside, gawking at the power of the river for about 30 kilometres to the first town, Zllakuqan, where we would meet our kayaks. 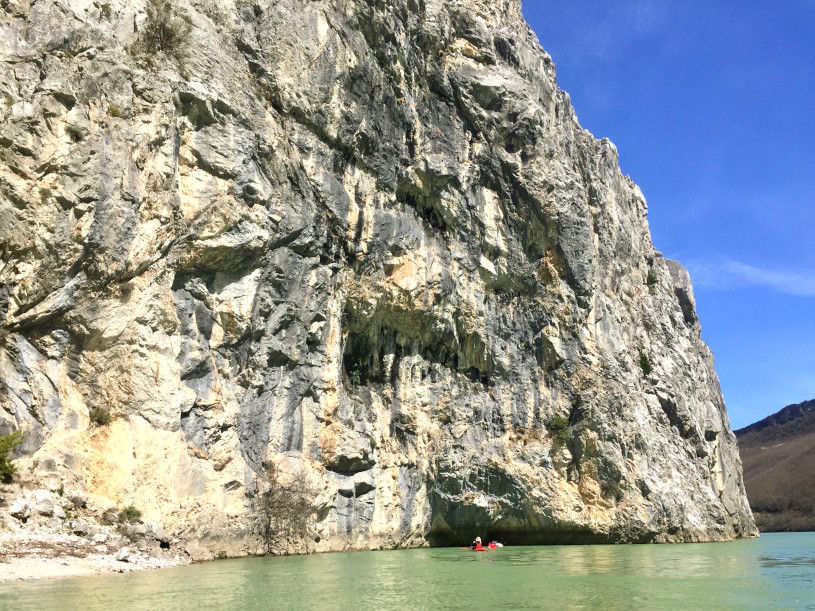 Up until this point the river had been pristine: the typical crystal-clear waters associated with the Dinaric Alps. However, when the rivers reach civilisation, they blacken, picking up literal heaps of rubbish that form its banks and embody the littering issue that plagues Kosovo and Albania. At times in our journey, we’d be paddling in tandem with a floating sofa or be unavoidably slapped across the face by a nappy hanging off the branch of a tree (I wish I’d got that on camera).

From Zllakuqan we began paddling, covering between 20-40 kilometres a day, occasionally cap-sizing from the simplest of manoeuvres. The river was bitterly cold and swollen from the recent snow-melt, at times expanding into the fields beyond its banks, consuming yet more rubbish.

Although the paddling was easy for the next few days it was made difficult by a number of small dams, resulting in tedious portage of our fully loaded kayaks through farmers fields as we approached the Albanian border. It was still only March, so the nights were cold dropping close to 0°C. Mark realised that his sleeping bag, although small and lightweight, was not nearly warm enough, making for some uncomfortable nights. Bura – the afternoon winds blowing north-east from the Adriatic Sea – would produce a headwind by 3pm, slowing our progress to a crawl. We adjusted and paddled 6:30am-3pm, allowing ourselves to get out of the wind and enjoy the evenings by not really doing a lot, except eat. 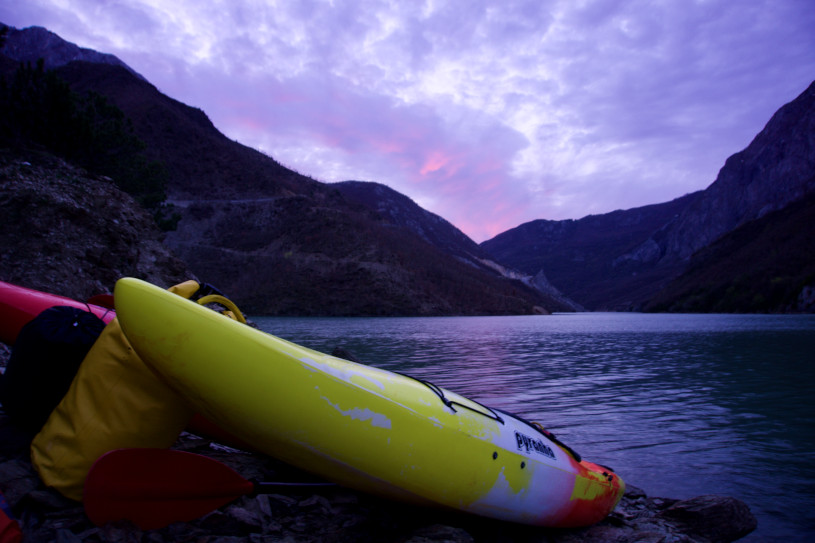 Our final day in Kosovo was unexpectedly eventful. We had become accustomed to the choppy waters that occurred when the river takes a sharp turn and the waves recoil off the banks. However, little did we know that this time was different. As we came around the bend the water was flowing faster, and the torrents continued until 20m ahead of us – I could see a distinct line across the water suggesting a drop. With little time to react I realised it was too late to bail and reach the river bank, risking dropping sideways or backwards with no helmet and no experience. I remembered Mark telling me that the thing to do in a rapid is to ‘lean forward, and paddle hard’, so that’s what I found myself doing. A few seconds later, by sheer luck I was at the bottom of this 3-4m drop still mostly dry and somehow still in control. The three of us, shocked by the experience, spent the next hour on the bank elucidating how and what just happened. As nobody had tried to paddle this river before, there was little information to plan with, so I had traced the river along Google Earth looking for ‘the white bits’ – apparently I had missed the largest one! 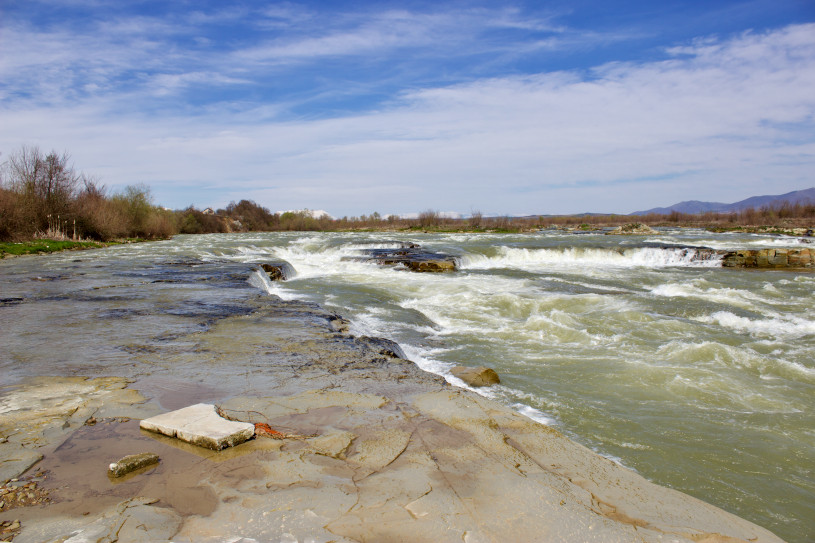 The river carried us onwards through Albania where a series of large-scale dams built during Communist Albania had caused the river to swell and form three consecutive lakes (Fierza, Komani and Vau i Dejës), before joining with the fast-flowing Buna river and feeding into the sea. On reaching Fierza dam, the first and largest of the three, a policeman quickly agreed (in exchange for €20) to give us a lift for the 3 kilometres around the 170m high barrier. The three kayaks were loaded into the back of his Land Rover with the seats folded down with one end of the boats tied to the headrests of the front seats.

The significantly slower flow meant that it took more effort to cover the same distance across these lakes. The water was calm though, and views incredible, particularly through the gorge of Lake Komani where limestone cliffs extended from the water, separated by small beaches accessible only from the river itself, making for my favourite camp location ever.

For our final dam descent of Vau i Dejës, we were picked up by an elderly Albanian man named Luigj, driving his heavily scraped yellow pick-up truck. We learned that he made better money as a heavy vehicles driver during the Communist era than he does now. He told us that every person was provided with 700g of bread per day with a kilogram of meat and 0.5l of milk for a month. If you complained about the food, you were put in jail for seven days. A lot has changed since then. 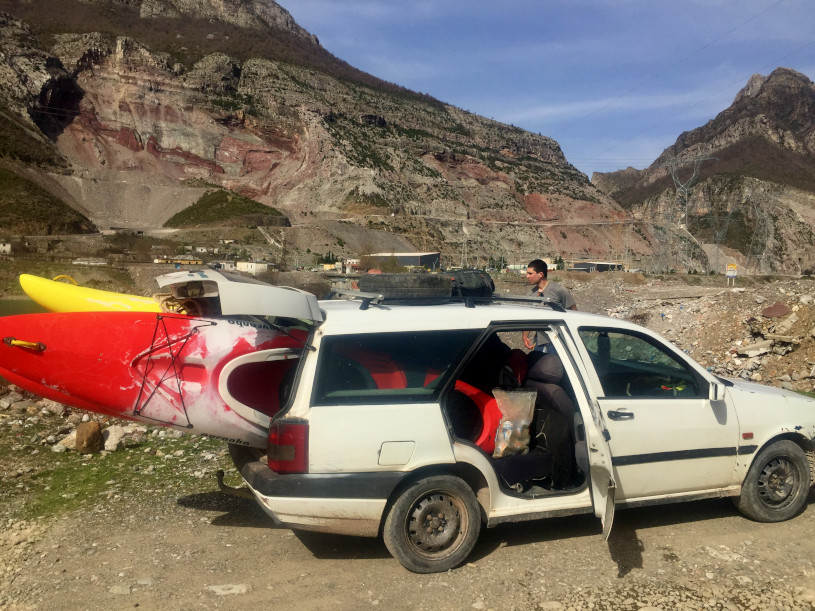 Our final day saw us merge with the River Buna covering 9-10km/h with little effort leading us into the sea – it’s calm waters contrasted by the waves of the Adriatic Sea as we made our way around onto the beach of Velipoje 10 days and 300 kilometres later. This trip reminded me that one way to push yourself is just to commit to doing something new for an extended period of time. Don’t be put off by the perceived barrier that you should do an expensive introduction course first, the reality is that if you apply some common sense and have some basic relatable competency, then you’ll probably be fine. If you can bring someone along who knows what they’re doing, then great. If you can persuade Tim and the contributors of ‘The Next Challenge’ grant to give you money, then even better!

All made possible by the Next Challenge Grant – thank you to Tim and all the contributors!

Val received a £100 award from The Next Challenge Grant.