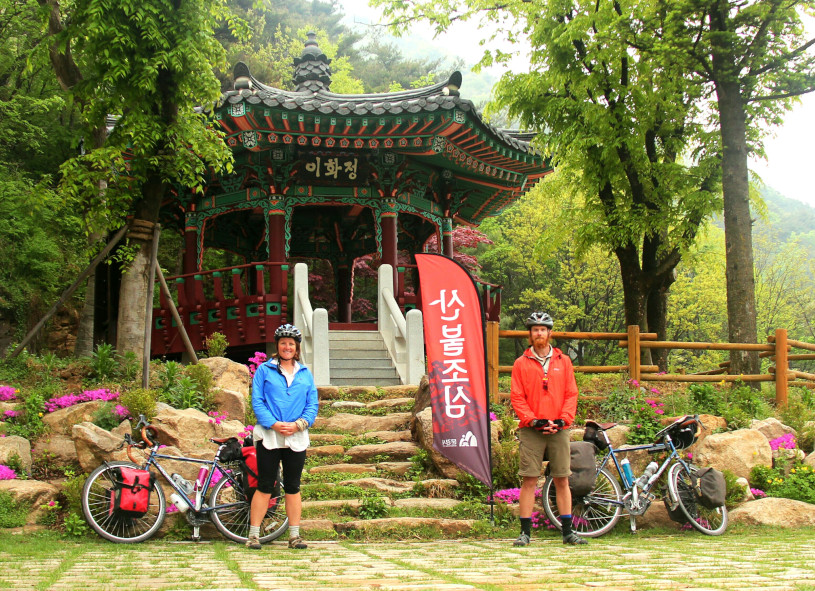 North Korea is in the news a lot at the moment. I’m sure it’s a great place and, who knows, maybe it will be open to cycle tourists one day. But until then, let me sing the praises of its southern neighbour.

Laura and I spent three blissful weeks cycling across South Korea as part of our round-the-world trip. Visiting South Korea was never part of our plan and it probably wasn’t even in our top 50 places to visit, especially not for cycling. But it turns out that it’s one of the best places in the world for touring and now we wax lyrical about it at every opportunity. 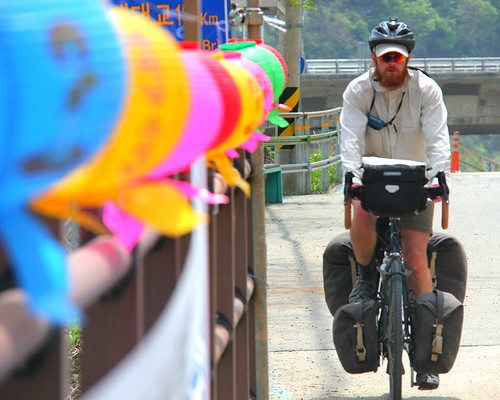 Friends of ours who have lived in South Korea are often surprised when they hear us rave about how good the country is for cycling. That’s probably because they lived there before the unveiling of its almight new network of cycle routes: the 4 Rivers Cycle Path.

In total, the country now boasts more than 1,000 miles of dedicated cycle routes, all on smooth tarmac and the vast majority of it traffic-free.

Here’s an extract from my book, With the Sun on Our Right, about the unlikely explanation for the network:

When former South Korean president Lee Myung-bak announced his ambitious plans to revitalise four of his country’s largest rivers, I imagine that creating the world’s longest bike path was quite a long way from his mind. His intention had been to improve water quality, provide a secure water source during times of scarcity and help reduce flood risk. But like so many great plans, this one did not go according to it.

From the outset, Mr Lee’s project was dogged with criticism: it was damaging the environment, it increased the risk of flooding rather than reducing it, it made water quality worse, it was too expensive, it was undemocratic, it was illegal and so on and so on. This was not what Mr Lee had planned. He thought his idea would bring adulation, but in fact, it had resulted in the opposite. He needed to salvage the project and his reputation. But how?

The epiphany came one evening when Mr Lee sat down at his desk with a bottle of soju and scratched his head (at least that is how I like to imagine it happening). The answer, he realised, was bicycles. Specifically, he would create a bike path that ran the length of each river and, in so doing, win round the public.

Remarkably, it worked and the path eventually stretched the entire length of the country, from Seoul in the north west to Busan in the southeast.

Cycle routes in the UK often tend to be little more than a small blue sign-post every five miles that tells you which way to turn. In Korea, they are quite different.

For the most part, the routes are entirely separate from roads, built specifically for cycling and with no cars in sight. When the routes hit hillsides, they don’t join up with roads to go over the top of the hills; instead, engineers have dug huge tunnels straight through the hills, purely for the benefit of cyclists. On the rare occasion you have to cross a bridge too steep to cycle up, there are special grooves at the side of the stairs so you can push your bike rather than carry it. 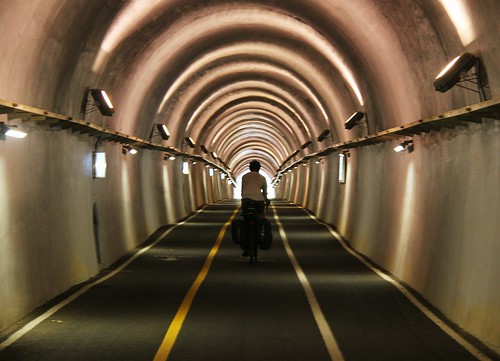 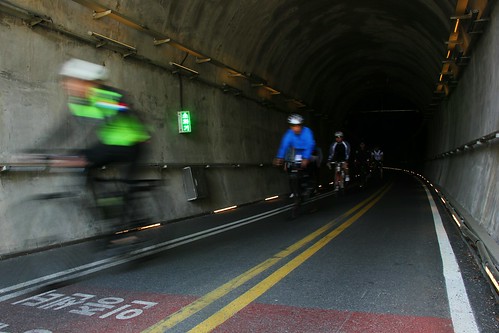 There are regular water fountains along the way and frequent hot-water urns so you can make your own tea or heat up some noodles. All of the toilets are immaculate too (I can vouch for this having slept in one).

There are bike pumps at the side of the path too. Not the type that you have to manually work but automatic ones like you get for your car.

In short, the cycling facilities in South Korea are better than anywhere else I have cycled.

To add to the fun of completing the routes, you can get a novelty passport at the start of your ride and collect stamps along the way. Every 10 or 20 miles, there are little green phone boxes, each with a unique stamp inside that corresponds to a page of the map in your passport. If you collect enough then they’ll give a certificate at the end. 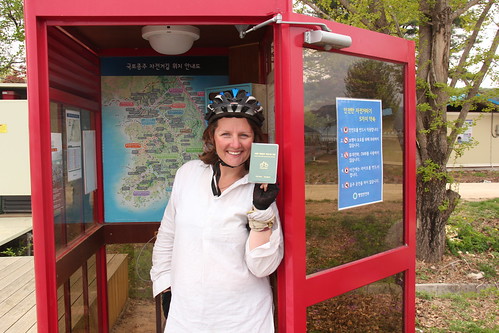 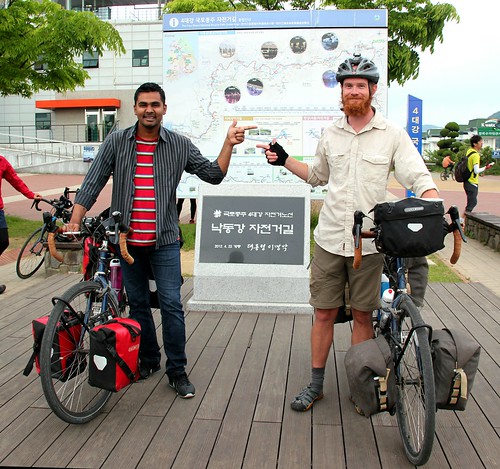 It’s hard to describe exactly what a jimjilbang is. The best I can manage is that it’s a cross between a sauna, a youth hostel and prison.

A sauna because it has lots of hot tubs and is ideal for scrubbing yourself clean at the end of a long day.

A youth hostel because, bizarrely, you can sleep in them after you’ve finished bathing.

And prison because you get issued with a sort of inmates uniform before entering.

Here’s the bit of my book where I’ve tried to give a little more explanation:

We were nearing the end of our route and we had not yet visited a Korean sauna (known as a ‘jimjilbang’). We had been told that we should not leave the country without having experienced one so, when we saw one sign posted that afternoon, we took our chance. To get to the entrance, we had to haul our ten-ton bikes up three flights of stairs. We had been assured that sleeping in a sauna was standard practice in Korea so, huffing and puffing after the climb, we wheeled our bikes straight up to reception and asked how much for the night.

In exchange for our won we were handed six hard boiled eggs and what looked like a prison uniform each, then pointed towards some double doors. I followed the signs for the men’s changing rooms in which I found several rows of hand held showers with plastic seats in front. The routine, it appeared, was to lather oneself with soap from head to toe then scrub vigorously for some time before finally rinsing and heading to soak in a communal bath.

Emerging from our separate shower room experiences – Laura’s, apparently, involving more group scrubbing than mine – we stood and marvelled at each other. We were both cleaner than we had been for months, but we were also wearing matching prison outfits, me in orange, Laura in blue.

We walked along a corridor clutching the eggs (about which we were none the wiser) and stopped when we came to a group of locals, all wearing identical uniforms to our own. They were gathered around a TV and seemed transfixed by what appeared to be a live broadcast of two people playing the board game Othello. Catching us staring, they pointed us towards a hall. We entered to find a middle aged man lying flat on his stomach snoring. The only other object in the hall was a large hot water urn perched on a table with a woman sat next to it, eating some noodles in the same blue get-up as Laura.

She gestured us over and we joined her on a gym mat, where we ate our boiled eggs. Even with a common language, I felt that the situation had veered so far from normality that words could never quite offer a full explanation. We made ourselves some noodles, watched a bit of Othello then fell asleep on a gym mat. The following morning we handed back our uniforms and continued on our merry way. Subsequent conversations with expats confirmed that this experience – the scrubbing, the uniforms, the boiled eggs, the gym mats – was a common activity in South Korea, but for us, like so much in the country, it was pure, bewildering, novelty. 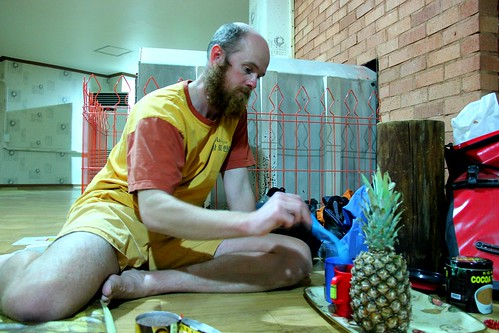 It’s not on that many people’s radar. People don’t know that much about it. And it’s certainly not (yet) well-known as a cycle touring destination. We knew nothing about the place before visiting and were blown away by the quality of cycling. 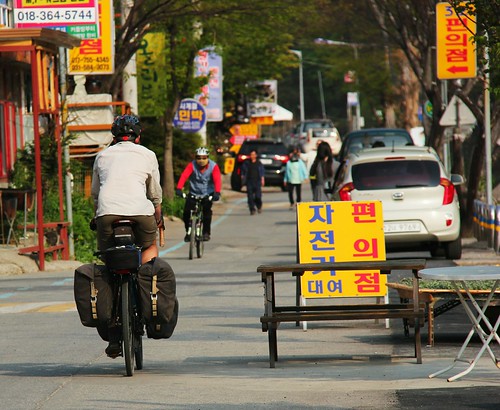 Here’s our video from riding across South Korea (and Japan, which is also excellent for touring and easily accessible by boat from SK):