Mile Diary #2 – I wrote it in Comic Sans 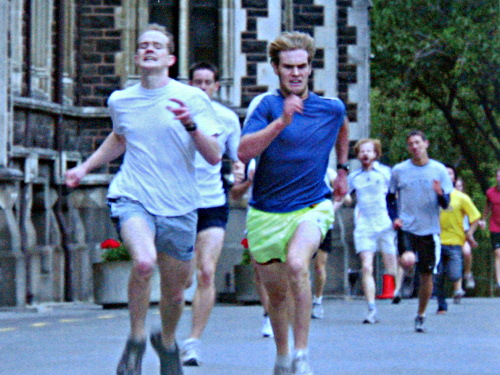 I assume the walls were once cream but now they’re a mosaic of scuff marks from black rubber and grubby patches where sweaty palms rested and slick finger tips gripped.

The strip-lighting and low ceiling don’t do it any favours either. Nor, for that matter, do the two guys lying on the floor grunting like neanderthals.

“OK, go faster!” blurts out one of them on heavy breath and you can bet it’s not me.

An email the day before had warned me that this session would “work me to my aerobic max”, whatever that meant.

I’d assumed we were on the track but it was desserted when I arrived and the flood lights were off, leaving it with the feel of a Hollywood film set. Wheeling my bike back I could see him stretching out against the wall underneath those strip-lights.

“I printed one out for you”, he says, handing me a sheet of paper with lots numbers on it next to words like “crunchies”, “toe taps” and “marines”. First time round, he explained, we’d do 30 second sets with 30 second rests. Then 40 seconds to 20 seconds rest and finally 50-10. Once the whole session was a complete, a line at the bottom said: “Medicine ball work (if not literally dead)”.

“It only takes 54 minutes!”, he said with genuine enthusiasm, “and I wrote the sheet in Comic Sans so it wouldn’t look so bad!”.

Even as your body begs you not to start the next exercise, there’s a strange proclivity to get yourself into position immediately and keep checking the time to see if your 30/20 seconds is up. Perhaps it’s just the urge to get it over and done with.

By the third and final run through, there is barely time to roll from one awkward stance to another. I even heard Al cut himself off mid-sentence, muttering something like, “Shouldn’t talk. Stops breathing”.

I’m lying on my back with my knees bent back towards my head. I propel myself forward in a roll, jump up, groan out loud and touch the ceiling as someone walks past the door with a friendly wave. “Huh!”, my lungs offer in return. The penultimate exercise, a cross between crab walking and press-ups, and I’m a mess. I can’t coordinate my limbs and it’s taking me a full 10 seconds to get back off the ground each time.

Mentally, sitting down seems like the right thing to do but instead the first minute is spent pacing around. Endorphins keeping the buzz going. After some initial exchanges – “Hey man, that was good”, “Yeah man, good session” – we take seats on different apparatus and a slightly awkward silence descends.

“…so, what’s this medicine ball work?”

I am currently training to run a mile as fast as I can. This is my diary and it originally appeared at What’s Your Challenge?