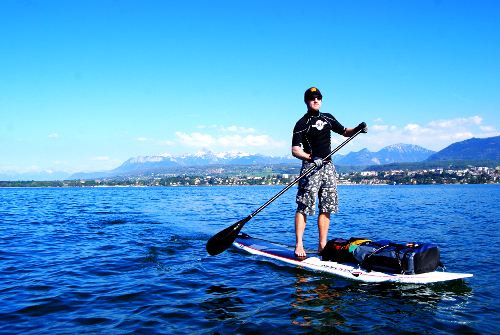 As regular readers will know, I am part of a small group of adventurous people who take it in turns to write articles for each other as part of an Adventurer’s Blogging Chain. To mark the New Year I’m very pleased to welcome Dave Cornthwaite to my site.

Dave has roller skated across Australia, kayaked 2,500km along the Murray River and is preparing for ‘Expedition 1000’ – twenty five 1000 mile journeys by different means of transport.

Here is his New Year’s message:

I’ve always had an unflappable curiosity for life and quite often it would get me into trouble. Shortly before the storms of 1987 which would prompt trees to fall on the neighbour’s house, my Dad held up some putty in his garage and told me he was going to make a seal. At eight years old I was still becoming accustomed to mysteries of life revealing themselves unannounced, and I was nothing less than excited by the potential of Dad’s upcoming creation – indeed, I hoped that I would learn from him and develop a skill that might get me a girlfriend. For some reason the job didn’t get done that day, but for a fortnight I pestered my Father until he relented and took me out the front. He seemed ever so blasé with what was about to happen and I remember feeling a hint of irritation because he obviously didn’t care much for his art and frankly to me that was unforgivable, because it’s not many men who can shape a water-going mammal out of putty.

For an hour he pottered around our car and slowly my patience diminished. There was no sculpture going on, as far as I could see, and it came as a great surprise when he yelled ‘Done!’

‘Where?’ I asked, and he pointed aimlessly at the top of the bonnet. I approached and squeezed my eye as close as I could to a strange hole that was now surrounded by putty. Instantly I became aware of my own stupidity, but Dad compounded it by pressing a button inside that sent a jet of windshield washer straight into my eye. I screamed, then sat down and cried in anger at all the deception. Somehow, even then, I was still hoping for Dad to produce a small, perfectly shaped seal – the swimming kind – from his back pocket. It never came.

Even though the sight in my right eye was never quite the same, I grew up querying the things that seemed odd but were generally acceptable. It seemed very over the top when my friend’s Mum got loud and red-faced because I put some elbows on the dinner table.

‘Why is that rude?’ I asked, my voice breaking.

I couldn’t help but think that we were constantly upholding other people’s laws without truly understanding them, but it was obvious that whoever had first decided that elbows shouldn’t be on tables was a powerful and persuasive fellow. I hoped that at some point he’d used his powers for more worthwhile means.

As a child, life is wonderfully simple. Alas, when we become bigger responsibility has the potential to drag every ounce of wonder from us. If we’re not careful we forget to view new things with potential, lest they get in the way of all the other stuff we have to do. The way I see it, if we have a tax return to fill in then we should just do it, any extra time spent moaning about the thing just takes up moments that could have been used doing something fun.

I decided a couple of years ago that New Years wouldn’t catch me out. Previously I’d woken up and somehow it was the last day on the calendar and my inbox was full of reminders to make resolutions. A list I would write, then three days later a list I would misplace, forget about, and spend a little while bothered with myself at all the inactivity I found myself doing. That’s life, when you’re forced to do something that you wouldn’t otherwise have done it becomes a half-hearted exercise that leaves you with a feeling of slavery. One day, I can’t remember which, I resolved to do some things that I’d wanted to do for a while. Remarkably, it wasn’t anywhere near the beginning of the year – or the end for that matter – and I was gleeful with a set of resolutions that I’d chosen to create because I wanted to. I once read somewhere that only humans who are concerned with the trivial choose to kill themselves, and I realised in a fit of teenage-like depression that you don’t necessarily need to be dead to be dead inside. As a consequence, whenever I’m feeling rocked by life – whether it’s debt or a long wait at the airport or the appearance of an occasional white hair behind the ears – I choose to create something new, something mine, and something only I can breathe into life.

Although I haven’t made time for any 1000-mile expeditions this year, 2010 certainly hasn’t been dormant. I started the year recovering from a 2500km source to sea expedition in Australia, then returned to England for the final couple of months of life on my narrowboat, Aslan. I helped Seb Terry break a World Record in March just one day after we met, and one month later we paddled across Lake Geneva together. In June Sarah Outen and I Stand Up Paddled across England from Bath to London, and a month later I flew to Peru for a two-month stint organising The Mototaxi Junket on behalf of the Adventurists. Proceedings were then wrapped up with a speaking tour in Australia.

I’m quite happy to be writing a guest blog for Tim just after the end of 2010, because my favourite adventure of the year was undertaken by Mr Moss himself. On the whole, however inspiring the concept of a journey is, I appreciate it a whole lot more if the adventurer in question can write/video blog and photograph the experience sufficiently to make me want to be there, right now. In fact, just looking through his website has me subconsciously planning another journey, by bicycle rickshaw. Fitting really, because I’d like to wrap this up with his words, which sum up a latent confusion that highlights the very essence of doing new stuff: just because we don’t have an answer for it, doesn’t mean it shouldn’t be done. Happy New Year, everyone.

Check out Dave’s site at www.davecornthwaite.com for films, photos, books and expeditions

This is part of the Adventurers Blogging Chain. The previous post was The Death of Community vs The Kindness of Strangers by Dan Martin, and the next post will appear on Dan Martin’s website.