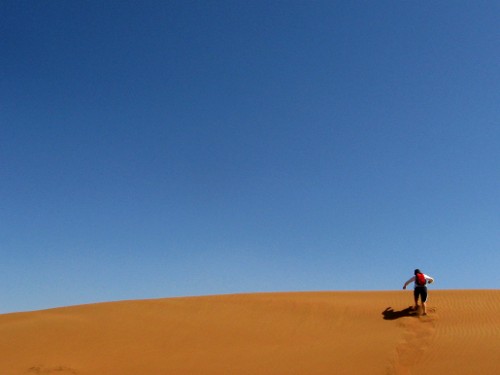 I frequently get emails from people asking for help with their expeditions – it’s the reason I started this website and the reason there’s a big green button at the top right of your screen offering as much.

More often than not, such conversations peter out and I never hear from the people again (with the notable exception of a young lady who emailed me a while back about trying to become the youngest British woman to climb Everest. The next time I read Bonita Norris‘ name was in the newspaper).

A guy who wanted to organise a mass-participation marathon every day in September, someone who hoped to row the South Atlantic, a bloke trying to ride a scooter around the world….

They are always grand ideas and I truly love that such people find me as someone to contact for help. However, in many instances it seems that rather than any practical hurdles being in the way, all that is really needed is a first step.

Steve emailed me back in February saying that he was going to do a similar Tube running challenge to mine and Laura’s. A few months later, having not yet started, he said he would join us on the Bakerloo Line but never showed up. Some confusion about changing clocks apparently. He emailed once more at the end of last month, saying he was starting in a few days’ time but his subsequent reply told me that he hadn’t managed to start (there was reference again to clock changes).

Under normal circumstances, I only ever write pleasant, supportive emails of encouragement (I’m not a big fan of negativity). But I felt that what was really needed here was some honesty and a good old fashioned kick up the arse so I sent this email….

Your website looks great. Please do send through a link to anywhere you mention us.

You’ve been talking about and planning your run for quite a while now. It may not be my place to say this but you’ve chosen to email me so I’ll go ahead and give one small piece of advice…

I seem to recall you mentioned the clock changes as a reason for not joining Laura and I on the Bakerloo Line six months ago (six months!). And now you say that there are quite a lot of logistics involved. I would have to disagree. Just turn up to any Tube station in running shoes with an Oyster card, A to Z and a few quid to buy water/snacks.

If it’s something you really want to do then just get out there and make a start.

I look forward to a photograph of you at the end of your first line. Best of luck to yourself and Zoe.

The next time I looked at Steve’s website, it was filled with photos from the Victoria Line.