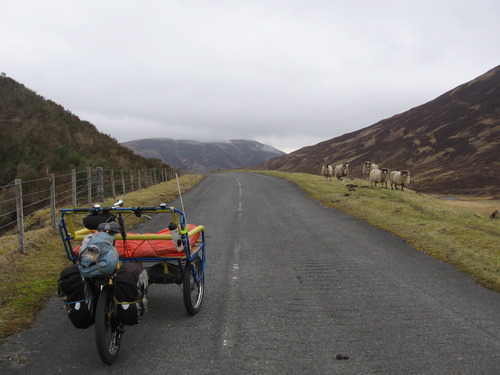 There are lots of reasons that pedalling this contraption is quite slow and a little hard work – its size, its weight, its poor aerodynamics and the fact that the left wheel acts as though someone is jerking the break every two seconds giving the bike a sort of nervous twitch are just a few examples. Those, coupled with the fact that I’d only had one litre of water over the last six hours of cycling, I just assumed that I was tiring. As it turns out, my right tyre was flat.

My arrival into Edinburgh could not have been more timely (throat parched, tyre flat, wheel on its last legs) and getting in ahead of schedule meant I had to swing by my friend’s work. As luck would have it, he volunteers at the incredibly apt Bike Station. Having pointed out my flaccid right tube, they quickly analysed the problem with my wheel and gave me three options:

The last few days have, I think, gone well. I’ve covered reasonable ground, my legs haven’t snapped and I even had the odd moment of what you might call “enjoyment”. Reaching Edinburgh feels like a significant first step out of the way.

I’ve had a residing fear in the back of my mind since before I even began the trip about whether I could get up steep hills or keep going for long days, and whether the bike would hold up to the punishment. But despite these apparent mechanical issues arising so early in the trip, I already feel a lot less stressed about it because I am on my way and I know I’ll sort it out.

I’ve never begun an expedition without a sense of trepidation and this one was no exception. But, without fail, once you’ve left the house and taken the first step, be it on an expedition, a new job or a live performance, it’s always better to be in the thick of it; doing rather than thinking about.

I still need to address the not insignificant issue of a wonky wheel – and the flat tyre for that matter – but, rightly or wrongly, I’m not too worried about it and am giving considerably more thought to what food is going to fill the calorie deficit of the last few days.