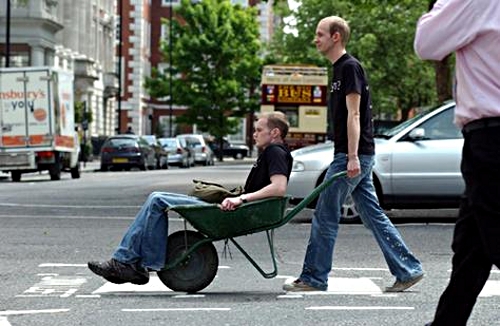 It’s probably fair to say that I was taking the lion’s share of the organisational responsibilities for the trip. Thom was doing a lot, but most things tended to go through me, so when Thom got off the phone and told me that a photographer was heading our way, I was pleasantly surprised.

After a last-minute dash to get our Chinese visa applications in in time, we sat in Starbucks and enjoyed our first public questioning.

We knew we were going to be photographed, so we were wearing our matching black and white ’80 Ways?’ T-shirts, and they were already working a treat. We moved ourselves back to the steps outside the consulate and sat back in the sun until the Corsa we had been waiting for drove past.

The plan, apparently, was to go up to Camden, get down to the canal, and snap some shots with us on a barge. It provided us with our first opportunity to try out our gab. Except that we were starting out with an advantage…

“Hi, I’m with the Daily Telegraph,” she started, and it suddenly didn’t much matter about our trip, our T-shirts, or charity. We did, however, have an opportunity to start dishing out the stickers I’d designed, which made it all worthwhile for me.

We succeeded in getting a shot of us on a canal boat, and I plied the helpful owner with 80 Ways stickers. At this point, I thought our media exposure was over for the day, but Clare, the photographer, had other ideas. In the back seat of her car, we tried to think of other good photo ops. We had driven half way round Regent’s Park before it dawned on us – a rowing boat!

“Hi, I’m with the Daily Telegraph, and these two guys are going to travel around the world using 80 methods of transport. I want to take a photo of them on one of your boats… but I don’t want to pay.”

She certainly had a way with words.

Unfortunately, the guy wasn’t going for it, so we had to pay. I expected some instructions, but before we knew it, we were rowing our way across the lake, trying to look composed for the picture. Clare didn’t need to shout ‘cheese’; I was already wearing the biggest smile my face was capable of. I’d rolled lazily out of bed that morning, waiting for Thom to turn up so we could get our Chinese visas. Now, here I was, rowing a boat across a pond in the middle of Regent’s Park, with a photographer from a national paper kneeling down on the bank, reeling off shots of me.

Clare was keen for a rickshaw, so we were headed to Covent Garden. We were distracted en route by a bus–a big, red double-decker bus. The kind you only find in London, and the kind that would make for a great pic.

Minutes later, the two of us were hanging off the back of a novelty wedding bus parked on Baker Street, beaming at Clare’s lens.

We pressed onwards, but the traffic was once again slowing our progress. This time, it was one of those huge car carrying lorries that caught our eye. In a movie-esque “Follow that truck!” kind of way, Clare ran the car round the block to get back in line with the lorry. It had moved. “There it is!” Clare swung the car round the corner and parked up while we ran after it.

Walking back to the car after reeling off some more photos, we passed some men at work. Just next to them lay an unattended wheelbarrow.

So now, I was sitting in a wheelbarrow, being wheeled back and forth across a zebra crossing in Mayfair, halting traffic while Clare tried to get the perfect shot. What’s more, the cart was in dire need of some oil and was making this high-pitched squealing noise, which only added to the entertainment and the attention we got.

Canal boat, rowing boat, London bus, car-carrier, wheelbarrow, and one of those little luggage trolleys that we got from outside a hotel–Clare was still keen for ‘the big one’, and we found it in Covent Garden.

We were on the look out for a rickshaw. Parked up just off the main square, we walked through Covent Garden market to pick up a pasty for lunch. I think we all saw it at the same time. Our heads craned up, dropped down, looked from one person to the other, and then we grinned. Just next to us was a big crane carrying two workmen who were busy painting a wall.

“Hi, I’m with the Daily Telegraph…”

“Sorry, love, you’ll have to ask the that guy down there.”

We asked “that guy down there” but he said there was no way “the boss” was going to let us on it.

Couldn’t hurt to ask, though, right?

“Sorry, but if anyone came down and saw you up there… We’re just not insured.”

“Oh, we’re insured,” I chipped in. “Yeah, we’ve got special insurance to cover us for all these crazy things.”

Well, we would be insured on the trip.

The next thing I knew, I was being jerked around in a cherry-picker crane, 30 feet above Covent Garden, reading the paper while Thom munched on his pasty and tried to look casual for a photo. Acting relaxed almost fooled me until I took a look around.

He didn’t respond, because his phone was going off. He answered it. We were strapped into a mobile crane, suspended in the air, looking down on second-floor windows, and Thom was taking a phone call.

It turned out, coincidentally, to be a journalist from the Daily Telegraph wanting to do an interview.

Clare was still not satisfied until we got our rickshaw shot (down in Chelsea), but we were soon done for the day. The day was great for so many reasons. Firstly, it was so far removed from reality that it was a constant source of amusement–we were being photographed by a newspaper, which is amusing in itself, but more than that, we were being photographed on the tops of cranes, on the backs of buses, and in the middle of lakes. It was great because it was completely unexpected–it had started ‘like any other day’. And lastly, it was great because of what it predicted for the future and for the trip–we could user our spiel to get help, people were going to help us; we were going to get free rides, and we were going to get round the world–in style.