Home Tim's Adventures Why Run the Tube? / If Not With Words

Why Run the Tube? / If Not With Words 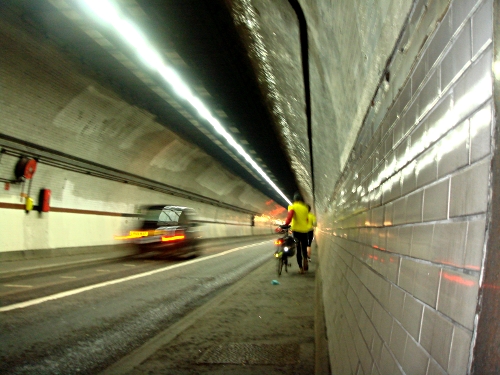 When I tell people that my girlfriend and I have been spending many of the last eight months’ precious weekends running tens of miles along transport lines through Greater London, they invariably ask “Why?”. If not with words then with silence.

Well, I don’t have an answer that is both meaningful and succinct but I guess it was to explore the city that I so easily take for granted. To have an adventure in our own back yard without spending money or requiring any expertise, training or specialist kit.

It was to set our alarms earlier on a Sunday than we did during the week and to endure more than either of us had endured in a long time only to cycle home in the dark at the end of it, weary and ravenous and cold and happy.

In some ways, it was to sit cross-legged in the middle of the street by Ladbroke Grove on the narrow precipice between hilarity and tears and say “I just want this to be over”. And meaning it but carrying on anyway and without regret.

Partly it was so that Cockfosters was no longer just the end of an automated announcement that begins with “Calling at all stations to” but was instead the start of the day that we had dreaded for so long. Is it really 50 miles to Heathrow?

We did it so that Parliament Square would forever be associated with the nerves and friends and cold on our first run; and the East London Line with the awfulness of running through dodgy East End backstreets, Rotherhithe Tunnel and supermarket car parks in the dark.

Our raison d’etre was performing elaborate stretches in revealing lycra on crowded train carriages, turning heads with our laughs and groans and embarrassing matching outfits.

Motivation was drawn from completing these runs in running shoes held together with duct tape, eating cheap flapjack trays from Sainsburys and drinking water drawn from the taps of pubs in which we just wondered if we could use your toilets quickly please?

It was to be able to stare at that iconic map of the London Underground Transport system and say “I ran there”. Where? Everywhere.

So, ask me again “Why run the Tube?” and that is what I will tell you.

If not with words, then with silence.