Home Tim's Adventures The Worst Visa Office in the World?

The Worst Visa Office in the World? 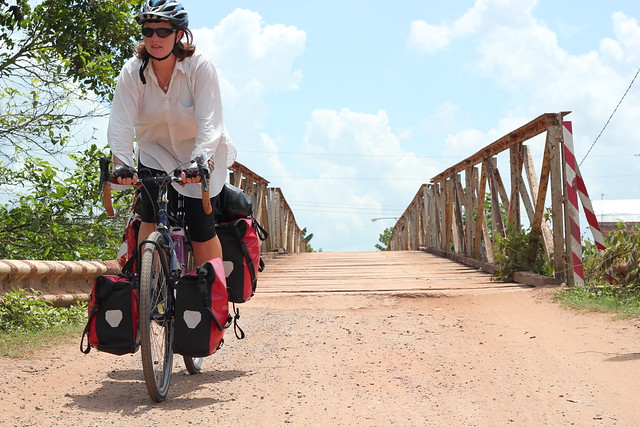 We followed the muddy red track towards a tin hut where a long, drooping, orange and white barrier blocked our path. With Vietnam being almost entirely devoid of four-wheeled vehicles, we simply joined the motorbikes in skirting around the barrier on a well worn patch of dirt and some moments later it became apparent that we were in Cambodia.

No one had checked our passports and the Cambodian official – perhaps a generous term for the portly middle aged man with a dirty white vest stretched over his pot belly – had simply wandered over from the shade of some trees when he saw us looking confused and waved us in the vague direction of Phnom Penh.

Foreseeing difficulties in our future, we took it upon ourselves to go back into Vietnam in search of an exit stamp. A young official – uniform and everything in Vietnam – took some convincing of our need to obtain an exit stamp but eventually directed us around the corner.

Around the corner was a boat.

Or, at least, some kind of floating building adjoined to the mainland by means only of a long, rusty gang plank above which stood a hand painted sign reading: “Border Customs Officials”.

We boarded the boat and, after some time spent wandering the corridors, knocking on doors and shouting “Hello!”, concluded that the Vietnamese immigration post was manned only by a Golden Retriever.

Outside I deigned to trouble the security guard who was enjoying reading the paper, topless, in a hammock. He pointed where a watch should be on his wrist and waved me away as one might a persistent but familiar fly.

An hour passed and the visa boat opened for business.

After several minutes sat outside the only door with someone behind it, the man inside appeared, indicated that we were in the wrong place and motioned us down a corridor. Two right turns later we knocked on a door which was opened by the same man who welcomed us into the opposite side of same office we had been waiting outside previously.

Back onto dry land, back around the barrier, back past the string vest official and back into Cambodia with an exit stamp for Vietnam. But still no visa for our new country. 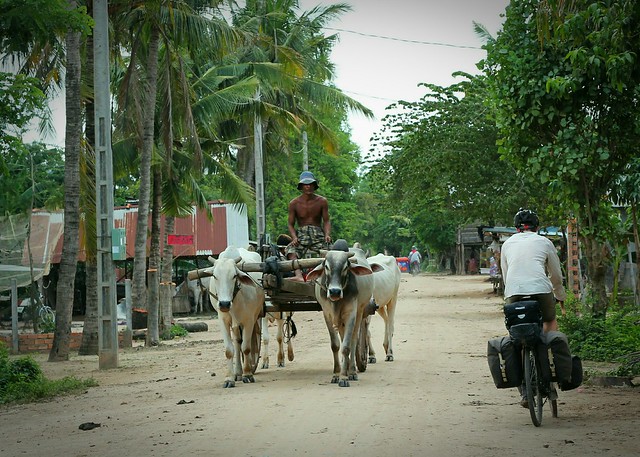 The directions given may or may not have involved looking for a bridge at which we should turn either left or right and travel for exactly 300-metres. We tried our luck with a dirt track, reached a dead end at the river bank  and began a U-turn when several men sipping drinks beneath a tree started up: “Visa! Visa! Go! Go!”

They pointed at a narrow muddy path through the undergrowth which we had failed to notice or at least failed to realise could possibly be the main thoroughfare for access to the immigration post of an international border.

We bounced and skidded our way through the jungle, past several wooden huts on stilts whose occupants all cheered “Hello everybody!” as we passed. After a few hundred metres, we were pleasantly surprised to come across a small complex surrounded by high walls painted a light yellow colour with the definite air of somewhere important.

We wheeled inside and were greeted by an almost farcically well organised bank of numbered windows with uniformed customs officials behind. I had trouble imagining a single other tourist finding their way here this month, let alone a surge of such visitors necessitating multiple booths and a queueing system.

Presenting our passports for inspection the official looked puzzled then said: “Visa?”

We nodded and he muttered something in what I presume was Cambodian but which I soon translated to mean:

“Oh no, sir, you won’t get a visa from me or, indeed, from any of my uniformed colleagues inside this government building labelled ‘Immigration’. No, no, no. Instead, you should follow the gentleman in the hoodie with the leopard print scooter behind you. He’ll sort you out.”

Baffled but happy to go with the flow, we cycled through the jungle once more and followed the scooter man. He stopped outside a house and started to clear away from a table and chairs the debris of what looked like the packaging from several discarded ready-meals. A handful of crumpled papers were presented and I filled them out with my usual rigour: illegible handwriting and fictitious addresses.

The bureaucratic farce seemed to come to a head with an elaborate ritual of rubber stamping in various sizes, shapes and colours. As we pushed our bikes away with newly endowed passports, I began to wonder how a hooded bloke on a moped had the authority to grant entry to the Kingdom of Cambodia when, from the corner of my eye, I saw the answer: crookedly etched into the back of one of the wooden chairs on which our business had been conducted, was the word ‘Visa’. Apparently a 13-year-old with a compass had provided all the authority he needed… 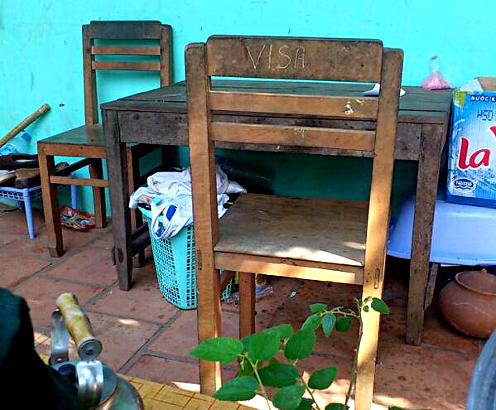