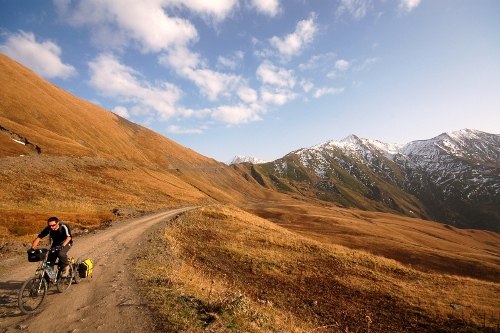 THIS ARTICLE: Is written by Andy Welch who set off in 2007 on an attempt to cycle around the world on a mountain bike with his friend Tom Allen. It would be unjust and impossible for me to try and summarise everything that Andy’s adventures have led to since then (for that you can visit the Ride Earth website) but suffice to say, he is a good man to advise anyone preparing for their first big bicycle expedition. Here are his top ten tips:

Tom and I spent a considerable chunk of time preparing for our bike trip, Ride Earth. We read about previous expeditions on websites such as ‘Crazy Guy on a Bike‘, and blogs like Alastair Humphreys‘ and Janne Corax’s.

We started a collaborative ‘Wiki’ website to collect a range of information from the philosophy of why we were going to kit lists, visa information for each country we planned to visit, medical advice, etc. We researched equipment and came up with possible bike set-ups. We contacted a number of companies for sponsorship. First we emailed, then called, and sent letters. Perseverance and finding the right person to talk to were the most important aspects of finding sponsorship.

In the end it became obvious that we could endlessly prepare but it wasn’t going to help us leave. Setting the leaving date was the most important thing leading me onto the next tip:

This was the main piece of advice that Al Humphreys gave us at the expedition planning seminar Explore at the RGS in 2006. Whilst the other cyclists on the panel were happy to chew the fat over the details, Al reiterated the importance of action. It was certainly inspiring and perhaps something which in a western world with too much information is an important skill to acquire, rather than getting bogged down in the idea of doing something and adding more layers of complexity.

We had this big idea of cycling round the world which required covering a certain distance each day, but people kept inviting us into their homes, stopping us to talk about interesting things and opening up to us about their dreams and aspirations.

It took us five months to cross Europe whereas Al Humphreys had taken 5 weeks. It was clear we were doing something different. We ended up going slowly, because we were getting used to the experience and we didn’t let the ‘concept’ of cycling round the world, get in the way of the ‘experience’ of being on a cycle tour.

It was impossible to ignore peoples’ invitations and it was clear that the ‘people experiences’ of the trip were the most interesting aspect of the adventure. We got a glimpse into the lives of people living in the different countries and cultures on the way. People were always hospitable and willing to help. It was just a case of asking for a water bottle refill or a place to camp and that lead to all kinds of interesting situations.

Early on there was a considerable learning curve to get used to the lifestyle of living on the road, having minimal possessions and going without the usual creature comforts. There were times when it seemed rather pointless and boring like cycling through endless agriculture farmland in Bulgaria or sheer madness like cycling into Mumbai.

However, each day brought new challenges and a change of scenery which kept things interesting. A bike tour is full of ups and downs: dealing with tiredness, boredom, constantly meeting people and not having personal space and being exposed to the elements but the lower the lows the better the highs felt, culminating in a hugely satisfying experience.

People were always willing to help and having been subjected to the ‘paranoia’ culture in Western Europe it took a while to deconstruct these myths and to trust average people. Through experience it was clear that people could be trusted because so many people helped us and nothing bad happened.

We often used the website Couchsurfing.org to find accommodation especially in the larger cities where otherwise we would have had to pay money to stay in hostels or hotels. You create a profile and send a message beforehand to ask to be hosted at a certain time, and get to meet really interesting local people and make lots of friends.

We were often invited to stay with people who we met on the road. At first, being two Brits, we were incredibly polite, going overboard with the repeated ‘thank you’s and generally being very British. After a while it became clear that this was getting in the way of being ourselves and it was a lesson in the importance of being open and relaxed with people.

Being a good guest is a lot to do with making the effort to make conversation, be friendly and tidy (and offering to cook also helps). Basically not acting like I was staying in a hotel. It was a good exercise in how to ‘inhabit’ a place in general. 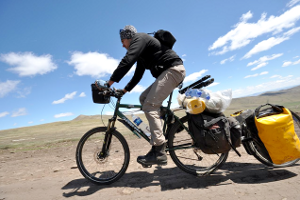 Having a goal in any challenge is important to keep motivated. With Ride Earth we raised awareness about a small, relatively unknown charity, with an important cause to protect wilderness areas. We received sponsorship from the WWF to observe climate change and write about our findings on the blog.

The creative aspects of the trip; taking photos and video were an important process to develop skills and amass journalistic evidence and also to communicate the trip to others and receive feedback which was a satisfying experience.

There are many ways to approach a cycling trip. One would be to set a destination and then cycle there, but an alternative would be to go wherever your desire takes you and see where you end up.

Something that Tom and I gleaned from the RGS Explore seminar in 2006 was the importance of communicating our journey to others. At the time, photos, and video capture methods were becoming more accessible and easier to get onto the web via sites such as Flickr and Youtube and blog websites such as WordPress.org which made it easy to set up your own blog with minimal technical knowledge*.

Internet cafes are available everywhere and even with the worst internet connection it is possible to send some updates and after a while garner a following of readers. I often get people emailing questions about their cycle trip ideas and it is satisfying to be able to offer what I have learnt from my experiences.

*For more information on setting up a website for your trip, see my article: How To Set Up An Expedition Blog