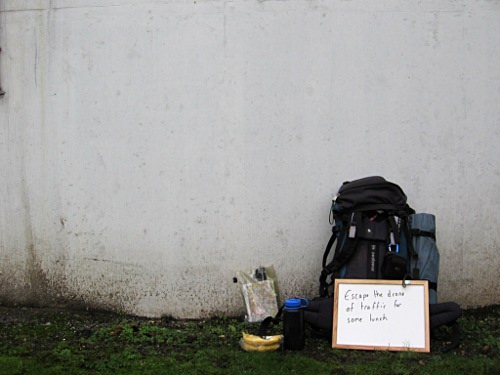 This is a low point.

I’m entering the third hour (or is it fourth now?) of standing at the side of the road with a thumb out and a sign saying ‘Cardiff?’ – as optimistic as the expression on my face each time I car turns the corner.

This isn’t even an adventure, let alone a holiday. What the hell am I doing with my life?

It was a noble idea – not needing money to go on an expedition. “A hundred pounds and a rucksack is all you need!” I’d declared the day before as I set off from my front door without much of a plan. It had started well. I got straight on a bus for Heathrow and, carrying as I was, only £20 notes, the driver had no change so I got the ride for free. Admittedly karma caught up with me almost immediately when I had to buy another, more expensive ticket to get out of the airport because, apparently, you can’t walk. Still, it felt like progress.

But they’re laughing at me now. Not the metaphorical, removed “they”. No, I’m taking about the builders who are pointing down from the construction site above and laughing at me as they have been for some time.

This is a low.

I’d thought it was hitching in the dark that was working against me but having gone through the rigmarole of finding a quiet corner of a recreation ground to sleep and cooked my porridge in a playground the following morning, daylight was doing me no favours.

Thumb in, sign down and rucksack on. Time to take action.

I didn’t let the futility of walking in the direction of Wales from London register. It felt good to be moving and the effort of walking was far less than that of maintaining the positive mindset and facial expression required for hitching. Besides, I was freezing. I’d been roadside for a good hour or two and no amount of running on the spot could keep the blood flowing to my finger tips.

It was a cool winter’s day and the walk to Eton was a pleasant one. I turned right and made a beeline for the next sliproad onto the M4. I scrambled up and over the boundary to an A-road and walked sheepishly along its side – there was no way I could hitch on here. I marched onwards but, two roundabouts later, there was still no sign of a suitable hitching point and I ducked away from the road to lunch by a hotel car park, away from the drone of traffic. By “lunch”, I mean two bananas and half a packet of chocolate digestives – the contents of my cupboards emptied into my rucksack the afternoon before.

I was at a loss of what to do. I couldn’t possibly hitch here – no places to stop, too many junctions, roads too busy – I could keep walking but who was to say it was going to change anywhere between here and Cardiff, my first destination? Sitting still wasn’t an option and walking back too depressing so without any logical backing, I kept walking.

And what a place to walk!

Let me tell you that the A4 between Slough and Maidenhead has a lot to offer – Staples, Dixons, McDonalds, Sara Lee factory – and all of this on the wonderful convenience of a large strip of concrete with easy parking access. Arguably less designed for the pedestrian but who am I to complain? Headphones helped drown out the engines but I couldn’t quell the hunger in my stomach. I’d eaten more than enough biscuits for one day and there was not a supermarket in sight. Marks & Spencer didn’t count and corner shops were unlikely to fit my budget.

I arrived at another junction with the M4 in a slight daze. Marching on empty, continual noise in my ears and a mild confusion as to what exactly I was trying to achieve on my week off work besides a headache. I filled up my water bottle in a pub, put my rucksack down at the side of the road ready to have another go at getting a ride. I reached into my pocket for the pen to write on my whiteboard but it wasn’t there. I checked the other pocket then the same one again. I looked on the floor, opened my pack and rummaged through all the bags. It wasn’t there but I had an idea where it might be – 4 miles back along the A4 where I’d stopped for lunch and used it to write a message on the sign and take a photo.

No problem. I’ll just go back to Staples and get a new one (I told you the A4 had a lot to offer). A hit for the accounts but it would hamper my hitching and ruin the photo theme for the trip without one. And so I set about walking back down my new favourite road. How far back was Staples? I couldn’t quite work it out until I arrived back at my lunch spot in a cold, frantic sweat some 90-minutes later. There was no Staples. I’d imagined it and walked back the entire length. The A4 is rubbish.

At least my pen was there. The most pathetic of rewards for three hours of utterly wasted life. I almost couldn’t bear to do it but my glucose deprived brain raised no alternatives and so, for the third and, I sincerely hoped, last time that afternoon/ever, I trundled along the grey bliss of the A4. (I even caved and went to M&S to buy the cheapest savoury combo I could find – reduced pitta and houmous).

Right. Here we go. This is it.

I’m slightly concerned about being picked up by the police but this has got to be the spot. The road goes directly to the M4 and 50% of that traffic will be going my way. There’s a perfect layby for someone to pull over in and I’m safely tucked behind a barrier. Sign up, thumb out. Surely God is going to cut me a break?

Moments later a tiny black Volkswagen with the back seat down pulls over behind me.

“Hi”, I offer hesitantly, looking around me in disbelief, “Are you stopping for me!?”