2016 Cycle Touring Festival Line Up Announced (48 hours to get tickets!)

Tickets for next month’s Cycle Touring Festival are only on sale until Friday evening.

Laura’s been working hard to get a fantastic line up of speakers (see below), all of whom are unpaid volunteers as the event is entirely non-profit. You can see a draft programme of events below too.

Find out more and get tickets at www.cycletouringfestival.co.uk 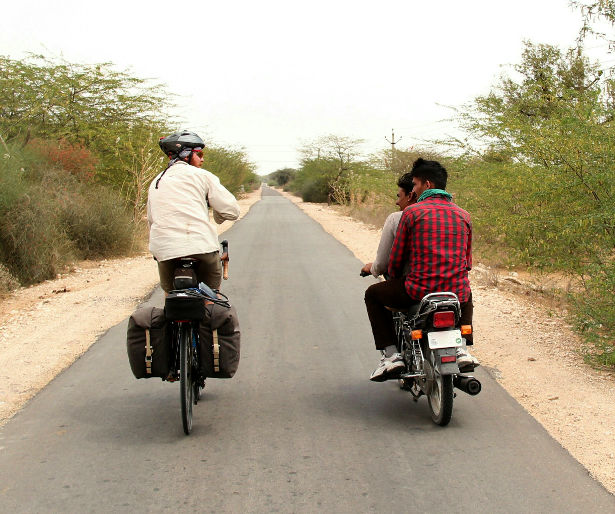 Life on the road

Sarah adventures by land and sea and will be talking about her London2London:Via the World expedition in which she recently rowed, kayaked and cycled around the Northern  Hemisphere. For two months through the harsh North American winter in 2014/15 her fiancee Lucy joined her on a bike – her first cycle tour. They will be on the couples panel together.

Stephen Fabes is a medical doctor and writer who spent six years cycling around the world, crossing six continents, 75 countries, and riding 86,209 km a distance equivalent to more than twice around the earth. En route he visited remote medical projects set up to help different marginalised communities.

Tom Allen, 31, has undertaken bicycle journeys on five continents and is now a full-time travel writer and filmmaker. Reluctantly best known for the adventure film Janapar, and less reluctantly for his blog TomsBikeTrip.com, he is currently attempting to move beyond being ‘that guy who cycled round the world and got married to an Iranian girl’, with several new projects in the pipeline for 2016.

Richard Barrett spent his working life as a professional marketer, but still found time for climbing, winter mountaineering and sea kayaking. He first visited the Harris hills as a teenager and was a regular visitor for years. These days he lives in North Harris where he fills an active pre-retirement with writing and photography.

Suzanne is Head of Development Scotland for Cycling UK. A keen touring cyclist, Suzanne got back on her bike with her son three years ago and hasn’t looked back. As well as manging a range of cycling projects, such as Play on Pedals and Belles on Bikes, she’s a founder of the Women’s Cycle Forum and is a co-ordinator of the We Walk, We Cycle, We Vote campaign. In her spare time she gets out on her bike with her family, eats cake and irregularly writes a blog about family cycling.

After a career spanning two decades testing and reviewing bicycles and writing on cycling technology for some of the UK’s leading cycling publications, Richard is currently technical editor of Cycle magazine. His day job is building award-winning custom bicycles at his workshop in west Wales.

Anna is a cycling instructor and mechanic living and working in London. She cycled 4000 miles solo round the coast of Britain in 2011 and has  toured in many parts of the UK and in France. She loves a good long-distance bike ride, her longest and most favourite being the Dunwich Dynamo annual pilgrimage from London Fields to Dunwich on the Suffolk coast – 120 miles overnight!

Realising that having children had left dust on their bikes, Tom and wife Katie set about finding ways of exploring the world with a newborn, a toddler and a five-year-old. Thomas Ivor’s now off to climb and ride between Britain’s ‘Three Peaks’ in his own right, aged 7.

Dan Joyce is the editor of Cycle, the magazine of Cycling UK (formerly CTC). He’s been a cycling journalist since 1991 and has probably published – and rejected – more touring articles than any other editor. He’s also written touring articles for other cycling magazines and the national press.

Stephen Lord wrote the first two editions of the Adventure Cycle-Touring Handbook. After a couple of longish bike tours, he decided to go into personal training and holistic health coaching, recently qualifying as a CHEK practitioner specialising in corrective exercise.

Avid recumbent cyclists who traded diamond frames for comfort. We’ve  crossed the USA twice covering more than 10,000 miles, and have completed shorter tours in France, Belgium, and the Netherlands.

Ed and Charly March-Shawcross used to see climbing and hill walking as their main sports with cycling was a side line to keep fit.  The arrival of children (Izzy in 2011 and Will in 2014) and the desire to maintain an active lifestyle led to Charly suggesting a cycle tour.  Since this fateful day they have taken lots of smaller tours in the UK and longer tours down the coast of Croatia (five weeks in 2013) and a loop of Northern England (six weeks in 2015).  They like to think that they are self supported when on tour but are certainly not above B&Bs and the use of laundry facilities (think 2 sweaty cyclists and two young children)!  All four family members are hoping to take cycle touring to the next level, make a (more) extended journey by bike and take the schooling on the road.

Pete & Alice have recently returned from a two and a half year cycling honeymoon riding between picnic spots from the UK to New Zealand. Alice, as well as being a yoga teacher, is now studying for a masters in physiotherapy. Pete, having worked in the cycling and adventure travel industries, now runs ‘Adventure Pedlars’ a company specialising in inspiring and facilitating adventures by bike.

Laura is the festival organiser. She recently returned from a 16 month, 13,000 mile cycle around the world through 27 different countries. Elsewhere she has crossed the Wahiba Sands desert on foot, walked across Patagonia and run the length of every London Underground Tube line.

Tim has supported over 100 expeditions across all seven continents. He’s organised large-scale Arctic and Himalayan expeditions, climbed new mountains in Siberia and hitch-hiked around the UK on a £100 budget. He’s also set a Guinness World Record for the longest distance cycled on a rickshaw and completed a 13,000 miles bike trip with his wife Laura.

Martin’s bike has been his liberator since the age of 5.  He has completed various continent–conquering epics: Norwich to Moscow, C2C America, C2C Australia,  Norwich to Nordcapp,  Norwich to Marrakech. Norwich to Istanbul in 2012, Carretera Austral and south to Ushuaia in 2014.

He cycles on his own with well-packed panniers enabling total independence.

Judith is training the next generation of cycle tourers (her two boys) with various bike combos – as they are too young to ride solo and her eldest has special needs.  Enjoys exploring the UK and making frame bags.
Also long time employee of walking and cycling charity, Sustrans.
@Ju_Pope

Growing up in the countryside and refusing to go and get a proper job, Richard instead decided he would be better off working in the places he loved – the mountains, forests, rivers and beaches. His passion is for wild food; teaching writing and talking about foraging and how it can work with a modern lifestyle.

Kate cycled from Texas to Alaska in 2006, criss-crossing the Rockies & exploring N.American responses to climate change. The Carbon Cycle; Crossing the Great Divide (Two Ravens Press, 2012) was short-listed for the Banff Adventure Travel Book Award. Her next ‘journey with a purpose’ will involve S.America, the Andes and biodiversity….

Kate lives in Cumbria and is a keen hill-walker, sea-kayaker and book worm – as well as a lover of cycling, preferably hilly.

Kevin Shannon is an adventurer, writer, speaker and entrepreneur from the UK. In 2010 Kevin set off from his home in Cheshire, UK and spent a year and a half cycling almost 10,000km’s around Europe – a journey that involved attempted muggings, being hit by a drunk driver and punching a wolf in the face (seriously). Kevin has also walked the length of Serbia (twice) and is currently writing his first book.

Currently he splits his time between his small creative design studio (Chips & Gravy Studios), writing and speaking about his expeditions and having a few micro-adventures.

Julian is best known in cycling for his 18,000-mile world record circumnavigation. Set in 2009 and in opposition to a record endorsing big finance, his book Life Cycles tells a story of globalisation by the roadside, and is an account of the political spirit of life by bicycle. He has cycled a number of times across Britain and Europe, writing roadside politics for New Statesman, Guardian, LRB and others.

Formerly assistant manager at a well known touring specialist, Ben has an encyclopedic knowledge of bicycle technology and its application to bicycle touring. He has spent the last 5 years, designing, maintaining and riding touring bikes, travelling in the UK and Europe both on and off road to understand what works and what doesn’t.

Jon Sparks is a photographer and writer based in Garstang. He has been a lover of cycling, especially cycling in Lancashire, for many years. His background includes riding road races and hill climbs very badly, and time trials not quite so badly. More recently he’s become a dedicated mountain biker and has also ridden a number of road sportives.

Jon is also a walker and (now very occasional) rock climber and mountaineer. He is a member of the Outdoor Writers and Photographers Guild.

Andrew Sykes is a mild-mannered secondary school teacher of French who one summer decided to get on his bike and cycle to visit a friend in southern Italy. He subsequently wrote the popular cycling travelogue ‘Crossing Europe on a Bike Called Reggie‘ based upon his experiences as a naive touring cyclist.

Three years later he was back in the saddle to cycle from Greece to Portugal for his follow-up book ‘Along The Med on a Bike Called Reggie‘. In 2015, to complete the trilogy of European rides, he embarked on Europe’s longest south to north ride. His adventures on his now semi-famous bicycle will be recounted in ‘The 35 Degrees: Tarifa to Nordkapp on a Bike Called Reggie‘, to be published later in 2016.

We are Jude and Astrid, a couple from Melbourne, Australia. In 2013 we packed up our lives and pedalled out of our quiet suburban street. Our journey took us through Australia, SE Asia, China, Central Asia, Iran, Turkey and Europe. We now live in London and will probably cycle home in a few years time.

Previous editor of Cycling World & Cycling World Ireland. A passionate writer who loves to explore and map addict who invariably gets lost! His two wheeled journey began several years ago and has blossomed into something unexpected but wonderfully rewarding. He gets to travel to so many beautiful places and all because of the simple bicycle. If he can do it then so can you.

Nancy is a firm believer in the idea that anyone can get on a bike, start peddling and have an adventure. She has enjoyed several cycle tours in the UK and Europe despite having very little knowledge of bicycles, very little money and very little time…they all turned out to be brilliant adventures.

Starting in Pakistan and finishing in Quito nearly 2 years later, Cress cycled around much of the world, mainly solo. She delivers motivational talks about her bike trip with humour and humility. As an expedition leader and Ambassador for Bramwell International she regularly travels, writes blogs and tests kit­ providing balance and contrast to her ‘day job’ as a leadership coach and trainer.

Visit www.cycletouringfestival.co.uk to find out more and get tickets ➜