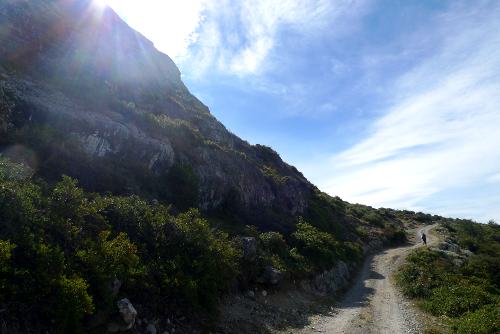 This is a piece I wrote after our route in South America joined a popular trail:

Because our route today took in part of a relatively popular walk, we have the luxury of an information sheet containing times, distances, descriptions and, notably, an ascent profile.

This showed a steep 400-metre ascent over a short distance. The route was described as ‘tough’. I have no idea how much up and down we did over the last few days but 400m sounded like a lot.

On the ferry ride over I realised I wasn’t fully relaxed because a part of my mind was worrying about how hard that ascent would be on heavy legs with a heavy pack.

As it turns out, it was fine. It was definitely a hill but not noticeably harder or bigger than several other slopes we’d encountered previously, some of which passed almost unnoticed with one’s head deep in thought.

A measurement is only useful when you are familiar with the scale. Yes, we may all know how long 400 metres is but can you visualise that height vertically? And do you know what it will feel like to walk up with a large rucksack on a hot day?

The same goes for distances, temperatures, wind speed, weight and all manner of other measurements used in the expedition world. Unless you really know what they mean, don’t get too caught up – it’s easy to make things sound scary on paper.