Home Tim's Adventures An Introduction to Arctic Exploration – Part I

An Introduction to Arctic Exploration – Part I 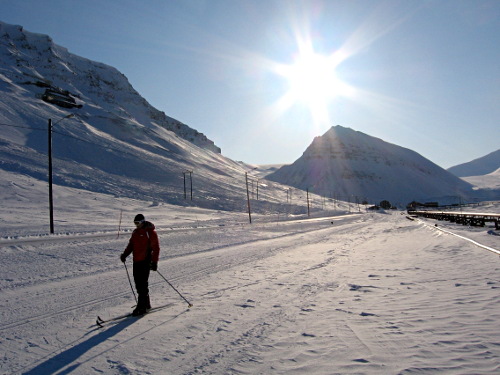 I’ll admit to being a little confused.

It’s to be expected after any international flights – losing track of time as you cross different zones and spend infeasible periods in queues and uncomfortable seats – but I’m pretty sure it should be dark by now.

Stepping out of the airport gates the first thing that strikes me are my nasal hairs. They’re frozen. The second realisation is the confusing one. Why is there still sunlight?

Technically speaking, I’m still in Norway but even the cheapest of airline tickets shouldn’t take three flights and the best part of a day to reach mainland Scandinavia. No, I’m in Svalbard. You may know this name from the Philip Pulman novels or perhaps you’re more familiar with ‘Spitsbergen’ as cruise ship brochures prefer to call it. For those interested, Svalbard is an archipelago of which Spitsbergen is the largest island and it is located in the high-Arctic, about halfway between the North Pole and the top of Norway.

Still, that doesn’t answer the question that’s baffling my body more than my mind. Is the sun coming up or going down?

If you’re ever lucky enough to pay a visit to Longyearbyen, Svalbard’s main town (which happens to be on Spitsbergen – are you keeping up with this?) then you’ll know that it’s at 78-degrees north. Not because you left “Norway” several hours ago on the plane and still haven’t landed. Nor because  it’s decidedly colder than wherever you started your journey. Not even due to the confusing thing that’s going on with the sun (up, it’s definitely coming up). No. You’ll know that Longyearbyen is at 78-degrees north because every other t-shirt, hoody, down jacket and snowsuit you see around town is emblazoned with a logo announcing as such.

So, it’s somewhere around midnight and the minibus we flagged down outside the airport, taking it in shifts to stand outside with frozen nostrils, is travelling a little too fast for my liking. Especially given that the road is made of snow. I suspect the driver’s used to it though. My suspicion is that this may not be the first time the white stuff has fallen on his town.

Lucy greets me in her underwear. “Hey!”, I shout, perhaps a little enthusiastically given that it’s now about 1am and she was, understandably, asleep. Oh, this isn’t my room? No, I didn’t see the note. Right, I’ll go back and read it. “See you in the morning!”.

I creep quietly into my room and try not to disturb the two sleeping beauties that already occupy it and have an apparent penchant for saunas given the temperature in here. I want to open a window but I’m a little scared at what might happen. It’s pretty cold outside, y’know.

Morning arrives and I know the drill from previous visits. Chuck on some layers and nip across the road for breakfast as fast as the laws of physics allow when jogging across ice in giant moon boots. Warmer than the blast of hot air that greets me are the wide smiles of old friends – fully clothed and awake this time.

I’m here with three friends to train for a big polar trip but we’ll be spending the first few days with the old hands of the British Schools Exploring Society (BSES) for a crash course in cold survival. The BSES leaders – who I know because I used to work with them – are here with a team of a dozen or so teenagers about to embark on a mind-boggling ten week expedition, skiing out of town with laden pulks (explorer speak for “sleds”) and coming back a month or two later, a little smelly with thousand-yard stares. We’ll tag along with these guys until we find our feet and are ready for a baptism of frozen fire.