Bikepacking Across the Cairngorms (Photo Blog) 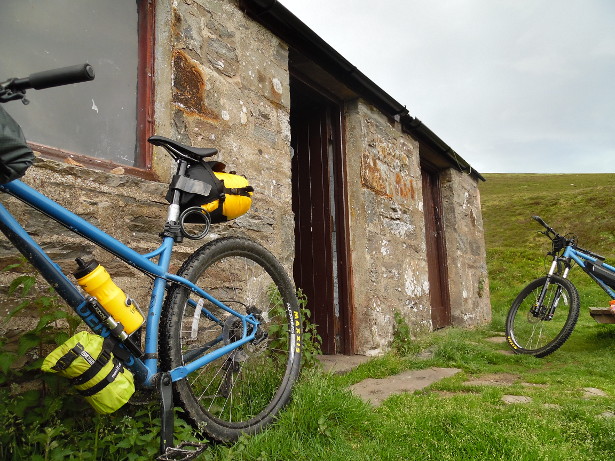 ‘Don’t!’, Laura shouted as the river raged against her waist, ‘it’s dragging me down!’

I let go of the handlebars and waded in deeper. Laura freed the leg which had been pinned by the force of the river turning her front wheel into it and stepped back. She lunged for the bank as I grabbed the bike back from her, took two strides towards the edge and swung the bike onto dry land where Laura dragged it to safety. 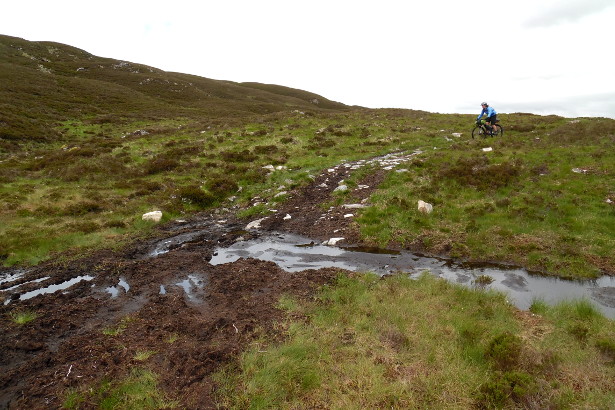 I’d been nervous when we set off. Not because I’d anticipated such traumatic river crossings – they were a surprise – but because this was something new to me.

I had spent lots of time in the mountains and I had spent lots of time on a bike. But I had never been out biking in the mountains, certainly not with the intention of spending several days away from civilisation. And the tiny bags we had strapped to our bikes hardly seemed adequate for a week in the hills. But we had everything we needed: warm clothes, sleeping bags and enough food for three days and three nights, after which we could re-stock. So there shouldn’t have been anything to worry about.

We bade farewell to civilisation with a portion of fish and chips then set about ascending out first mountain. The road first lost it’s white lines then its curb. The tarmac turned to gravel which in turn lost the battle to weeds. This track led us to a gate and on the other side of that gate lay mountains. A huge, wide open space greeted us with hills all around. We whooped for joy at the realisation that after all the talk and time spent imagining what it would be like, we were actually out there, in the mountains, on our bikes. 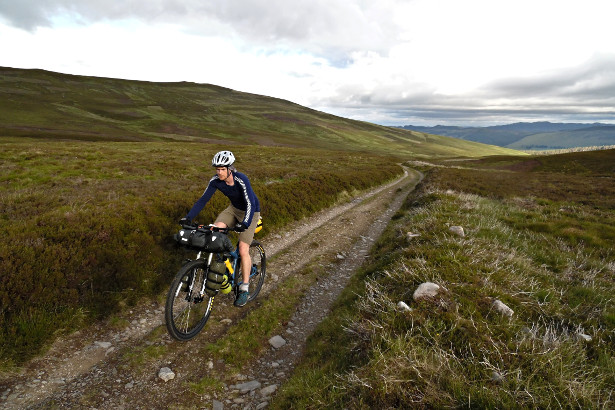 It probably wasn’t the best place to put the cheese but my bags were pretty rammed and I enjoyed undermining any notions of ‘hard core bike packer’ by strapping a block of Cathedral City to the outside of my saddle bag. Thankfully, Laura was behind me to pick it up when, inevitably, it fell off.

‘I’m sure it must be just over that next rise’, one of us said after reaching another next rise.

Bothies are old stone buildings dotted around the mountains that are maintained for walkers (and cyclists) to sleep in. Although the internet age has made information about them more readily available, there is still an air of mystique surrounding them. Sufficient an air, in this instance, to make us doubt the veracity of the tiny dot marked on our map that claimed to be such a shelter.

It was getting quite late. The wind was strong and the forecast was for rain. We did not want to get caught out but this bothy never seemed to be where we’d hoped it would be. So when we finally reached the top of that next rise and saw a small stone hut below us in the distance, we let ourselves hope. 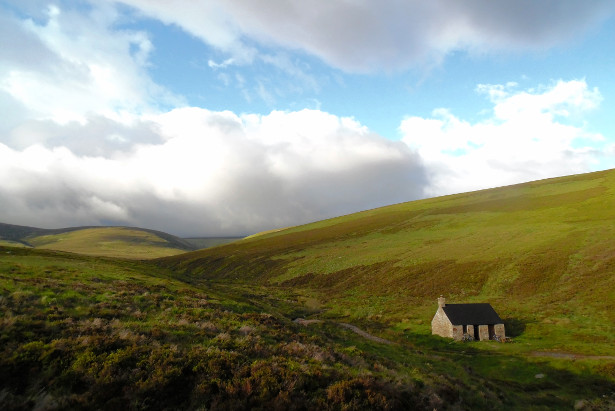 Laura bounced down the stony track at speed and I followed gingerly, nervous for my cheese. We pulled up outside and, apprehensively, I tried the door.

It opened and we danced, giddy with excitement.

We have a perfectly nice house back home. It has central heating, running water and a big comfy bed. This bothy had none of those things but, at that moment, it felt like more than we could have ever hoped for. Our own little home on the side of a mountain. We splashed ourselves clean in the icy stream out front, lit a tiny fire and put the stove on for a cup of hot chocolate. 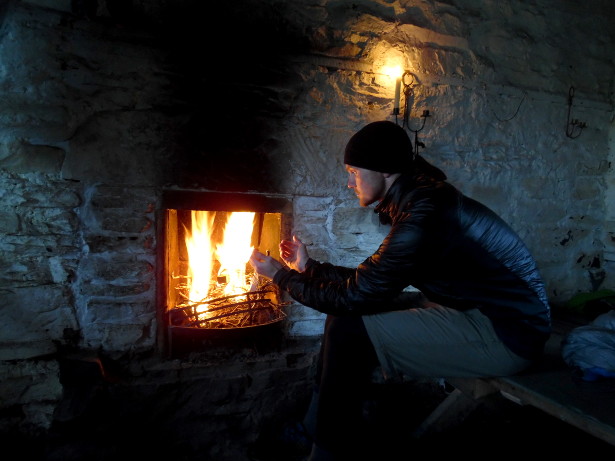 Skip forward eighteen hours and Laura’s just escaped from a raging river with her bike. Thoroughly wet, I forced my way back across the river, removed the bags from my bike – I wasn’t getting caught a second time with a bike that was too heavy – and, without thinking, started throwing them over the river. Remarkably, they all made it across.

All safe and on the right side of the river, we reloaded the bikes and marched onwards trying to get warm.

Before long we came across a river twice as large as the last and split into four different sections. We walked up and down the banks and waded in thigh deep in a few places. But we reluctantly reached the conclusion that crossing that river was not safe. This was a depressing thing to realise because it meant we had a long evening ahead.

It had taken eight hours to get there. Half of that had been spent cycling, the other half spent pushing or carrying our bikes. All of it had been in driving rain. We were cold, wet, tired and hungry.

On the other side of the river was a large, flat, bicycle path leading several miles to a bothy. It might have taken forty five minutes to reach shelter. On our side of the river lay the same distance in dense heather, impossible to ride through and a pain in the ass to walk through with a bike. In grim silence, we dropped our shoulders and began pushing. 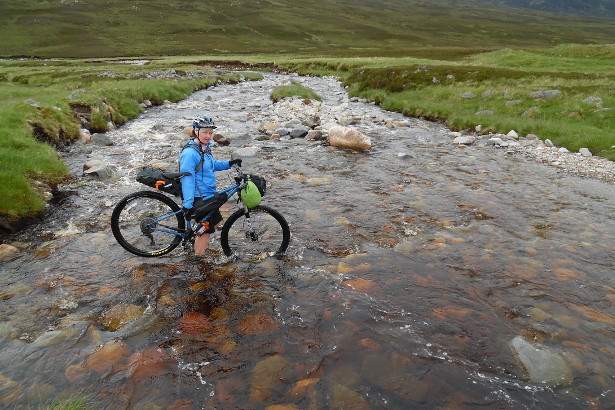 At some point, we each lost dexterity in our hands making even the most basic of tasks difficult. Checking the map, unwrapping a chewy bar or undoing flies for a pee. They were all rendered improbably complicated by cold digits which just added to the feeling of despair.

There was no real danger. At any point we could have unfurled our sleeping bags and zipped up our bivvy bags for shelter but that seemed desperately unappealing as compared to the refuge of four stone walls and a roof.

Huddled together, our backs turned against the rain, we fumbled open some tin foil to retrieve the fresh sausage roll our friend had baked. It may have just saved our lives. That last little bit of energy kept us going through the last hour of heather bashing with a bike until, at last we regained the trail. 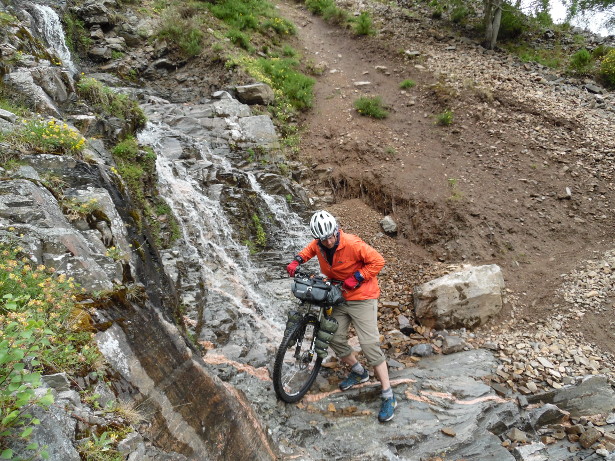 I did not want to get up.

The day before had been long and tiring. Not just from the physical effort of moving bike and body over that pass, but the extertion of staying warm through the cold rain and colder rivers too, and the vague anxiety that’s often present at such times: will we make it out? will it be OK?

When we reached the bothy, we barely spoke for the first hour. Just sipped hot, sweet drinks until basic brain function returned. And then all we could manage was the occasional headshake that said ‘What the hell just happened?’

We went to sleep warm, dry and with full bellies. We had made it out and it was OK. 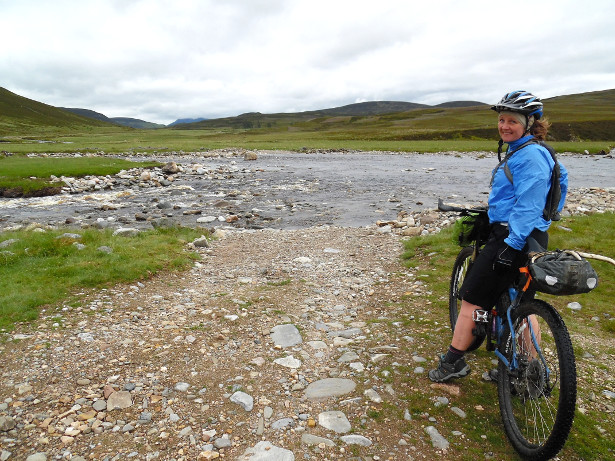 But then I woke with a cold.

Laura may well tell a different version of events –  one that involves me crying ‘man flu’ and complaining a lot – but the human body is a remarkable thing. I didn’t want to get out of bed that morning and certainly didn’t want to exert myself. But we crossed another pass that day. We cycled over hills and through bogs, carried our bikes along cliff edges, pushed them through heather, forded rivers with them slung over our shoulders. 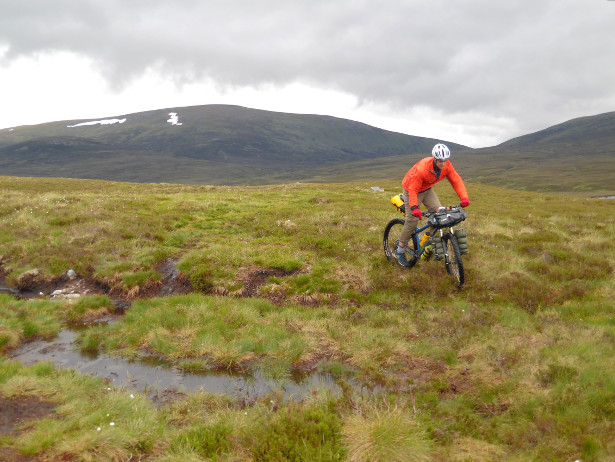 No doubt I did my fair share of whinging and I’ve certainly felt better. But it was still a fantastic day and one of the most memorable of recent years. Without bikes we would never have travelled through such a remote stretch of the Cairngorms. And to do so having started the day in wilderness and finishing it while still in the wild, was a rare treat.

That night we ate every last morsel from our bags. It was our third night out and marked the bottom of the barrel for our food supplies. We dissolved a stock cube in hot water to hydrate then slept a sound night’s sleep on wooden bunks with the faint sound of rain in the background. 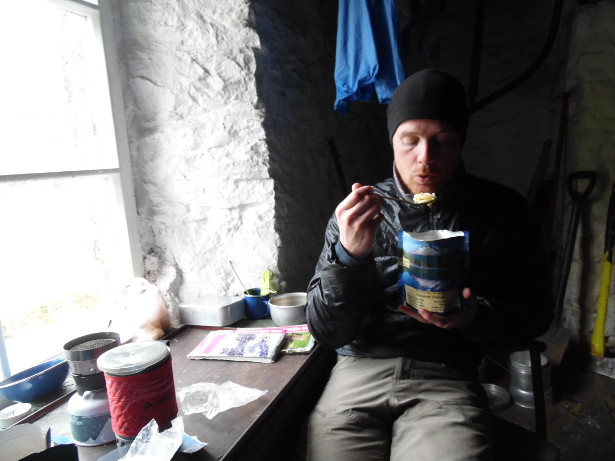 I’d tried my best to dry out my kit overnight as I had also attempted – unsuccesfully – the night before. I stuffed wet socks into my sleeping bag with the aim of drying them through body heat and left my open shoes to air as long as possible before putting them back on in the morning.

We set off under clear skies, aiming for Aviemore, and my toes were pretty much dry. Our trail had been washed away some time ago by flooding and we barely made it 800 yards before having to plunge into our first river, my shoes and socks instantly back to an icy square one.

Our path was subsequently blocked by a large ravine which we had no choice but to descend and find a way to climb out the other side. Steep scree is treacherous at the best of time but doubly entertaining when attempted with a heavy bike on your shoulder. 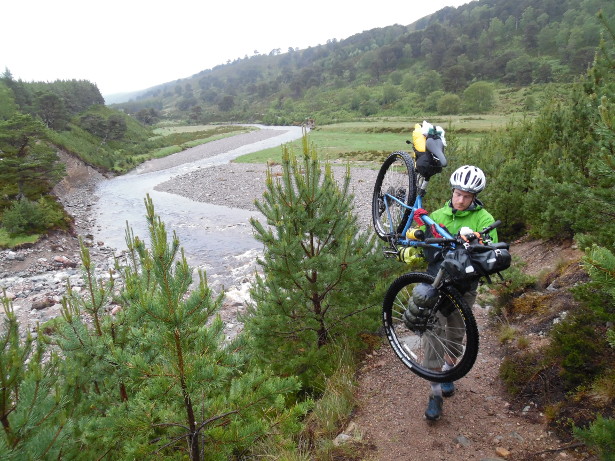 Slowly the trail returned, the ground hardened and tarmac met our tyres. The first car that passed – a forest ranger in a jeep – came as quite a surprise. We had been used to dodging boulders and bogs, not moving vehicles. Wearily, we stopped at a junction to dig out the map and discovered a single chewy bar in the process which we shared between us. We were tired and hungry but tt couldn’t be far now. We took a right and joined a busier road when a brown road sign appeared in the distance and slowly came into focus.