Everest is a mountain. ‘Everesting‘ is the act of climbing 8,848-metres. 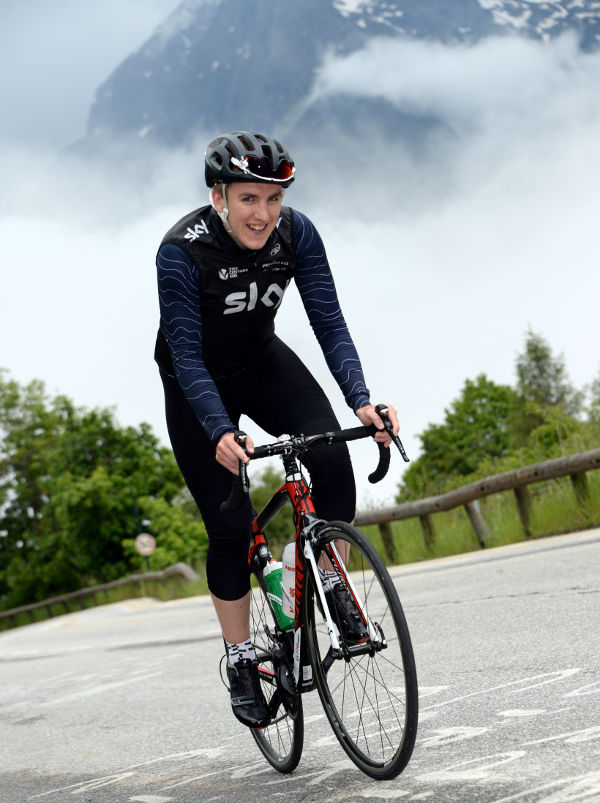 Climbing Alpe d’Huez on a track bike: Crazy idea right? Turns out I was correct!

Before the challenge even began, me and my dad faced the massive task of driving from northern England to Alpe d’Huez in the south of France. The journey took us on a ferry across the English channel on what would be a 16 hour drive with an overnight stop in Lyon, leaving us a couple more hours to drive the following morning. During the last couple of hours lots was going through my mind: had I trained hard enough? Would I be able to repay all the confidence given to me by all my sponsors? And then all that was put to the back of my mind when we turned a corner on the highway and for the first time I saw Alpe d’Huez. What an amazing sight. But then it hit me, I’d never climbed something as high as what was before me.

After dropping my bags in the room and greeting our wonderful hosts for the week I was ready to get started! I started to set my bike up in the workshop provided by Chalet Ribot whilst my dad went to pick up a hire bike for himself. He joined me a little while later and we decided we would attempt a first ascent to ‘test the waters’. Fairly early on I realized a mistake I had made in the planning of the challenge: there was no let up whatsoever in the climb. This made climbing on a fixed gear even more difficult as there is no time for muscles to recover and almost all the first half of the climb was done standing up. I got over the worst of it but had started to cramp up in my legs and couldn’t push the gear on my fixie. After a short stop with my dad we decided that I carry on on his road bike that he had hired for the week, despite my legs continuing to cramp all the way to the top. After this first ascent I was left with the overwhelming feeling that I had let myself down and also that of everyone who had sponsored me.

After speaking to our hosts and my dad, I felt more positive about day two and the week to come. Although I had not managed to climb Alpe d’Huez on the fixie like I’d set out to, I had changed my goal to complete it on a normal road bike. Day two started well, I did my first full rep with dad riding at my side, without stopping for more than a drink refill and felt so good when I got to the top I headed right back down to go for rep number two of the day. By around half way up on this rep I started to lack energy and could feel myself fading. I put this down to not eating since breakfast a few hours earlier. I pushed on knowing that when I finished I’d have a good few hours of rest before I went again on day three. 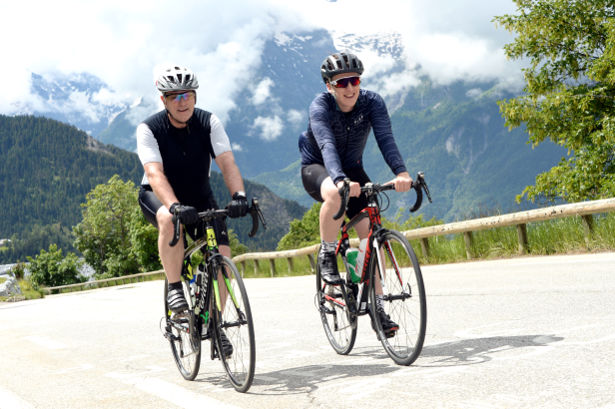 Day 3: Cycling Through the Pain

On day three I woke up with tight legs and was hoping for some nice weather. I was greeted with a damp fog when I looked out the window and at breakfast I couldn’t see the other side of the valley which is usually easily visible. But my dad told me to kit up and we’d drive down to the bottom of the mountain and see how it looked. At the bottom I decided to just dig deep, cycle through the pain and the clearing fog. I knew that if I could get past the first few corners I would be able to enjoy the ride with the worst part of it over. I did exactly that and in no time at all was approaching the top. I gave the photographer a little wave and soldiered on to the top. And with tha, rep number four done. Back to the chalet for some lunch and a rest.

Ascent five went as smooth as a ride up Alpe d’Huez could go after doing four before it. I did it in a fairly average time but the main thing was  that I was still going!

Day 4: Trying to Avoid the Thunderstorm

Day four  was the most interesting and certainly the most challenging for me. This was because of two things:

One, I felt as though I was still a fair distance off my goal, having three more climbs to go was a tough pill to swallow. Two was the weather. There was a storm rolling in over breakfast and I was at risk of getting caught in it. After breakfast I set off for number six on the mountain that I was now very well acquainted with. I pushed hard for just under a couple of hours trying to beat the rain to the top, with the motivation of a big lunch waiting for me when I arrived back at the chalet.

With two to go I was feeling great about my prospects of finishing. That was until the thunder started. Looking outside whilst eating lunch was surreal: heavy rain was flooding the roads with the occasional rumble of thunder. My dad looked out and said the same two words he had on day three: “kit up”.

Driving to the bottom of the mountain was interesting, the weather we were seeing was more like that of Yorkshire not the Alps in France. However, despite the conditions around me I really enjoyed this time up Alpe d’Huez. I felt more at home riding in the rain and it made it all the more easy with less riders around on the roads. I pushed on for my penultimate ascent feeling a big sense of pride about how the week had gone. I got to the top knowing that on the final day I would only have to do one more rep to complete my Everest challenge up Alpe d’Huez.

Waking up knowing I only had one rep to go was a great feeling, it almost made the pain in my legs go away. Suprisingly, climb number eight was the least exciting. I made it up without any problems and the only difference was that my Dad took photos of me finishing my last rep on the stage finish line of the Tour de France, which as a massive cycling fan was pretty amazing. Getting back to the chalet was a brilliant feeling, we had made friends with six other cycling guys who were in their fifties and that night we all sat down and had dinner together, cooked by our wonderful hosts at Chalet Ribot. We cracked open a few beers and all celebrated together, bringing an amazing week to an end.

I would like to say a massive thank you to everyone who sponsored me and the sponsors who actually made it possible for me to get to France. I beat my target of raising £500 for cancer research which is an organisation very close to my heart, and I’m very proud to have supported this cause.

Read more about The Next Challenge Grant and other winners here.