Cycling to the Sea – Guest Blog by Anna Hughes

A guest blog today from Anna Hughes who was one of the speakers at the Cycle Touring Festival last month and who spent two months cycling around the coast of Britain. 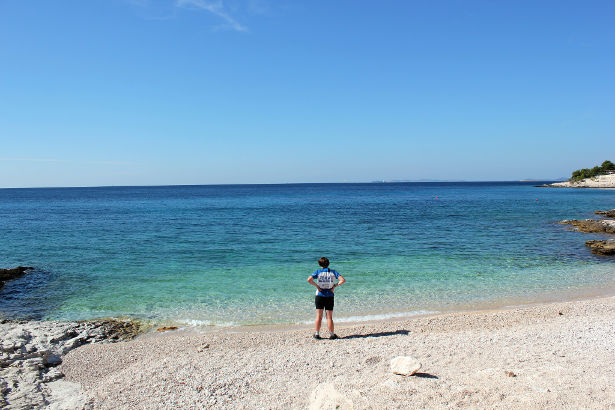 Cycling to the Sea – Guest Blog by Anna Hughes

Cycling to the sea is my favourite kind of ‘micro-adventure’; there’s something special about pedalling until you can pedal no further. That first glimpse of the horizon brings out a childish excitement in me, and the ride is rewarded with fish and chips and a dip in the sea. Nowhere in Britain lies more than 70 miles from the coast*; a long ride, but not impossible. Make it a day trip or an expedition weekend – there are many ‘official’ coast to coast routes in varying degrees of challenge.

I have cycled from my home in London to Brighton, Felpham, Burnham-on-crouch, Dunwich, Brixham (via Poole), and Lowestoft, many of them overnight, and I can’t recommend it enough. Head east on a night ride and pedal into the sunrise. Head west during the day and chase the sunset. Take snacks, water, and swimming gear. Pick your destination and go!

Our route starts in the hidden waterways of east London: the Limehouse Cut canal, Bow Creek, the Greenway (built on top of a sewer). Then alongside the deafening traffic on the A13, before reaching Rainham, crossing the railway line and entering the marshes. A Eurostar rattles its way to Paris, a yellow and white caterpillar speeding through the countryside. The Queen Elizabeth bridge that carries the M25 across the Thames stands like a regal gateway above the water. The skyline of London steadily recedes, but it’s not far, really; even beyond the M25 we can still see the skyscrapers at Canary Wharf. Soon we’re deep in Essex, riding down country roads surrounded by fields and hedges and farm buildings. Villages come and go, a collection of houses and country pubs gathered around the squat Parish church. We reach the top of Bread and Cheese hill, a famously testing hill for a county that’s mainly flat. The gradient is 10%, and it’s long. We turn to look back at the industrial areas that not so long ago looked unreachable. But now they are behind. Keep the pedals turning and the miles soon pass.

It’s 3pm when we get our first glimpse of the sea, from the top of a hill in Hadleigh. We both shriek: “The sea!” “Amazing!” “This is the most brilliant day!” We’ve been looking forward to this moment for six hours, the magic of arriving at the seaside something that never fades, even in adulthood. It’s more exciting that we’ve cycled here, that we didn’t do anything other than pedal in order to achieve our goal. There are 45 miles behind us — not long miles, just lovely miles with the wind carrying us eastwards to the coast. Tankers float in the middle of the channel, and we can see the masts of boats moored at Leigh yacht club. Across the water lies Kent. The sun is low in the sky and at its richest, the grass and the water and the road itself blazing. We approach the seafront, clutching firmly at our brakes — the roads here are built into the cliff, and it’s a steep descent to the water. The pier stretches far into the estuary, seeming to almost reach the other side — at a mile long, it’s the longest in the country. The chilly waves suck at the shingle with great breaths; we aren’t tempted to paddle, this time. Huts sell hot donuts and ice cream, and packs of seagulls squawk in the sky above. We sit down to the best fish and chips we’ve ever eaten; we earned these. The rapidly dropping winter sun paints the sky the most impressive shade of orange. It’s a daily miracle that we often forget about, surrounded by buildings in the city. But here, the sky is wide open, and the water reflects the colours, and the sunset goes on forever.

It’s dark by the time we set off home; these short winter days fade fast. Laura finds the station but I still have a few miles in me so start pedalling back to London. I pause in the middle of the countryside somewhere past Basildon. It’s pitch black. The crescent moon is bright but it’s too cloudy for stars. I can hear nothing apart from my own breathing. I feel as if I’m wrapped in a bubble, standing in the middle of the darkness, the silence pressing down. Ahead, I can see London, the big city going about its business, a long line of lights spread from horizon to horizon. There is the white blink at the top of the pyramid at Canary Wharf, there the red spots on top of The Shard. Planes hang in the sky, landing lights glaring as they wait to come into Heathrow. Tall chimneys of power stations shine like red beacons in the darkness. All of it bustling, and here I am, surrounded by nothing. I stand there for a moment, breathing it all in, letting the silence fill me; once I pass under the M25 the lights will return, the road will become wider and the traffic heavier. We cycled to the coast today. We went to the seaside. There are hundreds of other things we could have done, but we chose fish and chips and chose to earn them the hard way. It’s cold, and my legs are almost done, but I’m smiling.

Anna’s love of cycling to the sea led her to follow the full UK coastline in 2011 – 4,000 miles in 10 weeks. She wrote a book about it: Eat, Sleep, Cycle: a bike ride around the coast of Britain. You can find out more about Anna at www.annacycles.co.uk.